Chapter: Biochemistry: Transcription of the Genetic Code: The Biosynthesis of RNA

We have seen that prokaryotes have a single RNA polymerase that is responsible for the synthesis of all three kinds of prokaryotic RNA-mRNA, tRNA, and rRNA.

·    RNA polymerase I is found in the nucleolus and synthesizes precursors of most, but not all, ribosomal RNAs.

·    RNA polymerase II is found in the nucleoplasm and synthesizes mRNA precursors.

·    RNA polymerase III is found in the nucleoplasm and synthesizes the tRNAs, precursors of 5S ribosomal RNA, and a variety of other small RNA molecules involved in mRNA processing and protein transport.

All three of the eukaryotic RNA polymerases are large (500–700 kDa), com-plex proteins consisting of 10 or more subunits. Their overall structures differ, but they all have a few subunits in common. They all have two larger subunits that share sequence homology with the β- and β' -subunits of prokaryotic RNA polymerase that make up the catalytic unit. There are no σ-subunits to direct polymerases to promoters. The detection of a gene to be transcribed is accom-plished in a different way in eukaryotes, and the presence of transcription factors, of which there are hundreds, plays a larger role. We shall restrict our discussion to transcription by Pol II. 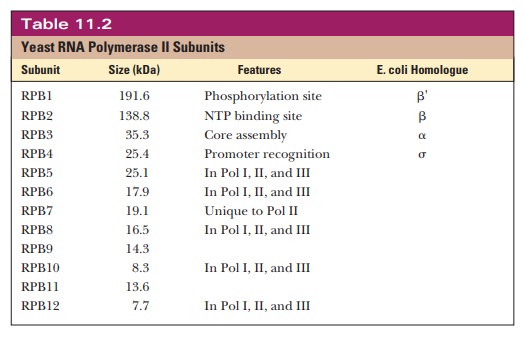 The function of many of the subunits is not known. The core subunits, RBP1 through RBP3, seem to play a role similar to their homologues in prokaryotic RNA polymerase. Five of them are present in all three RNA polymerases. RPB1 has a repeated sequence of PTSPSYS in the C-terminal domain (CTD), which, as the name applies, is found at the C-terminal region of the protein. Threonine, serine, and tyrosine are all substrates for phosphorylation, which is important in the control of transcription initiation.

X-ray crystallography has been used to determine the structure of RNA poly-merase II. Notable features include a pair of jaws formed by subunits RPB1, RPB5, and RPB9, which appear to grip the DNA downstream of the active site. A clamp near the active site is formed by RPB1, RPB2, and RPB6, which may be involved in locking the DNA:RNA hybrid to the polymerase, increasing the stability of the transcription unit. Figure 11.17 shows a diagram of the structure of RNA polymerase II. 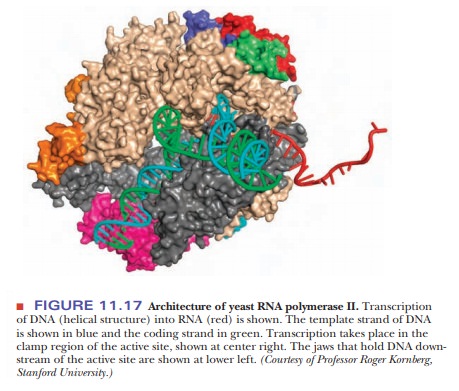 Recent structural work on RNA polymerases from prokaryotes and eukary-otes has led to some exciting conclusions regarding their evolution. Extensive homology exists between the core regions of RNA polymerases from bacteria, yeast, and humans, leading researchers to speculate that RNA polymerase evolved eons ago, at a time when only prokaryotes existed. As more complex organisms developed, layers of other subunits were added to the core poly-merase to reflect the more complicated metabolism and compartmentalization of eukaryotes.

How does Pol II recognize the correct DNA to transcribe?

Pol II promoters have four elements (Figure 11.18). The first includes a variety of upstream elements, which act as enhancers and silencers. Specific binding proteins either activate transcription above basal levels, in the case of enhancers, or suppress it, in the case of silencers. Two common elements that are close to the core promoter are the GC box (–40), which has a consensus sequence of GGGCGG, and the CAAT box (extending to –110), which has a consensus sequence of GGCCAATCT.

The second element, found at position –25, is the TATA box, which has a consensus sequence of TATAA(T/A).

The third element includes the transcription start site at position +1, but, in the case of eukaryotes, it is surrounded by a sequence called the initiatorelement (Inr). This sequence is not well conserved. For instance, the sequencefor a particular gene type may be –3YYCAYYYYY+6, in which Y indicates either pyrimidine, and A is the purine at the transcription start site (TSS).

The fourth element is a possible downstream regulator, although these are more rare than upstream regulators. Many natural promoters lack at least one of the four elements. The initiator plus the TATA box make up the core pro-moter and are the two most consistent parts across different species and genes. Some genes do not have TATA boxes; they are called “TATA-less” promoters. In some genes, the TATA box is necessary for transcription, and deletion of the TATA box causes a loss of transcription. In others, the TATA box orients the RNA polymerase correctly. Elimination of the TATA box in these genes causes transcription at random starting points. Whether a particular regulatory ele-ment is considered part of the promoter or not is often a judgment call. Those that are considered part of the promoter are close to the TSS (50–200 bp) and show specificity with regard to distance and orientation of the sequence. Regulatory sequences that are not considered part of the promoter can be far removed from the TSS, and their orientation is irrelevant. Experiments have shown that when such sequences are reversed, they still work, and when they are moved several thousand base pairs upstream, they still work.

Transcription initiation begins by the formation of a preinitiation complex, and most of the control of transcription occurs at this step. This complex normally contains RNA polymerase II and six general transcription factors(GTFs)-TFIIA, TFIIB, TFIID, TFIIE, TFIIF, and TFIIH.

What do eukaryotic transcription factors do? 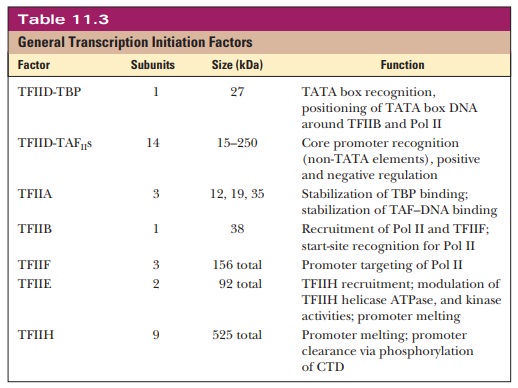 Figure 11.19 shows the sequence of events in Pol II transcription. The first step in the formation of the preinitiation complex is the recognition of the TATA box by TFIID. This transcription factor is actually a combination of several proteins. The primary protein is called TATA-binding protein (TBP). Associated with TBP are many TBP-associated factors (TAFIIs). Because TBP is also present and required for Pol I and Pol III, it is a universal transcription factor. TBP is highly conserved. From species as different as yeast, plants, fruit flies, and humans, the TBPs have more than 80% identical amino acids. The TBP protein binds to the minor groove of the DNA at the TATA box via the last 180 amino acids of its C-terminal domain. As shown in Figure 11.20, the TBP sits on the TATA box like a saddle. The minor groove of the DNA is opened, and the DNA is bent to an 80° angle. 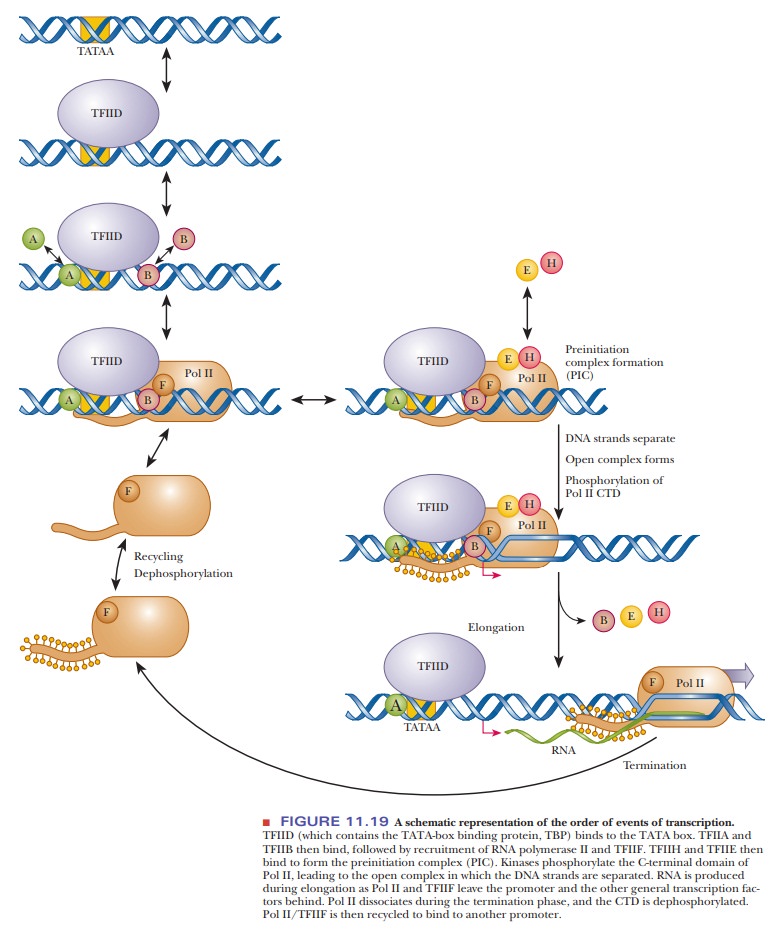 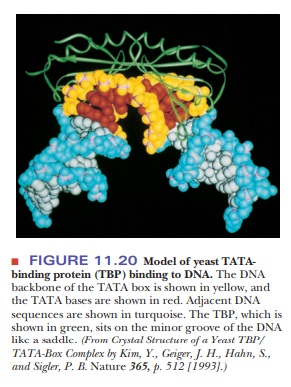 As shown in Figure 11.19, once TFIID is bound, TFIIA binds, and TFIIA also interacts with both the DNA and TFIID. TFIIB also binds to TFIID, bridging the TBP and Pol II. TFIIA and TFIIB can bind in either order, and they do not interact with each other. TFIIB is critical for the assembly of the initiation com-plex and for the location of the correct transcription start site. TFIIF then binds tightly to Pol II and suppresses nonspecific binding. Pol II and TFIIF then bind stably to the promoter. TFIIF interacts with Pol II, TBP, TFIIB, and the TAFIIs. It also regulates the activity of the CTD phosphatase.

The last two factors to be added are TFIIE and TFIIH. TFIIE interacts with unphosphorylated Pol II. These two factors have been implicated in the phos-phorylation of polymerase II. TFIIH also has helicase activity. After all these GTFs have bound to unphosphorylated Pol II, the preinitiation complex is complete. TFIIH has been found to have other functions as well, such as DNA repair.

Before transcription can begin, the preinitiation complex must form the open complex. In the open complex, the Pol II CTD is phosphorylated, and theDNA strands are separated (Figure 11.19).

Less is known about elongation and termination in eukaryotes than in prokaryotes. Most of the research efforts have focused on the preinitiation complex and on the regulation by enhancers and silencers. As shown in Figure 11.19, the phosphorylated Pol II synthesizes RNA and leaves the promoter region behind. At the same time, the GTFs either are left at the promoter or dissociate from Pol II.

Pol II does not elongate efficiently when alone in vitro. Under those circum-stances, it can synthesize only 100–300 nucleotides per minute, whereas the in vivo rates are between 1500 and 2000 nucleotides per minute. The difference is due to elongation factors. One is TFIIF, which, in addition to its role in the formation of the preinitiation complex, also has a separate stimulatory effect on elongation. A second elongation factor, which was named TFIIS, was more recently discovered.

Elongation is controlled in several ways. There are sequences called pausesites, where the RNA polymerase hesitates. This is very similar to the transcrip-tion attenuation we saw with prokaryotes. Elongation can also be aborted, leading to premature termination.

Finally, elongation can proceed past the normal termi-nation point. This is called antitermination. The TFIIF class of elongation factors promotes a rapid read-through of pause sites, perhaps locking the Pol II into an elongation-competent form that does not pause and dissociate.

Termination begins by stopping the RNA polymerase. There is a eukaryotic consensus sequence for termination, which is AAUAAA. This sequence may be 100–1000 bases away from the actual end of the mRNA. After termination occurs, the transcript is released, and the Pol II open form (phosphorylated) is released from the DNA. The phosphates are removed by phosphatases, and the Pol II/TFIIF complex is recycled for another round of transcription (Figure 11.19).

Eukaryotic transcription is far more complicated than the prokaryotic version.

There are three RNA polymerases in eukaryotes, of which Pol II produces mRNA.

Pol II is a large protein with at least 12 subunits. Some of the subunits share homology with the subunits of prokaryotic RNA polymerase as well as with eukaryotic Pol I and Pol III.

The organization of promoters and enhancers is more complicated with eukaryotes. An important promoter element is the TATA box at –25.

Initiation of eukaryotic transcription is also much more complicated. In addition to the polymerase and the promoter, six general transcription factors are involved in forming the initiation complex.