Chapter: Biochemistry: Transcription of the Genetic Code: The Biosynthesis of RNA

Proteins that bind to DNA during the course of transcription do so by the same types of interactions that we have seen in protein structures and enzymes- hydrogen bonding, electrostatic attractions, and hydrophobic interactions.

Proteins that bind to DNA during the course of transcription do so by the same types of interactions that we have seen in protein structures and enzymes- hydrogen bonding, electrostatic attractions, and hydrophobic interactions. Most proteins that activate or inhibit transcription by RNA polymerase II have two functional domains. One of them is the DNA-binding domain, and the other is the transcription-activation domain.

What are DNA-binding domains?

Most DNA-binding proteins have domains that fall into one of three categories: helix–turn–helix (HTH), zinc fingers, and basic-region leucine zipper (bZIP). These domains interact with DNA in either the major or minor groove, with the major groove being more common.

A common feature seen in proteins that bind to DNA is the presence of a segment of α-helix that fits into the major groove. The width of the major groove and the α-helix are similar, so the protein helix can fit snugly. This is the most common motif because the standard form of DNA, B-DNA, has the major groove of the correct size, and no alterations in its topology are necessary. Such binding proteins are often dimers with two regions of HTH, as shown in Figure 11.25. 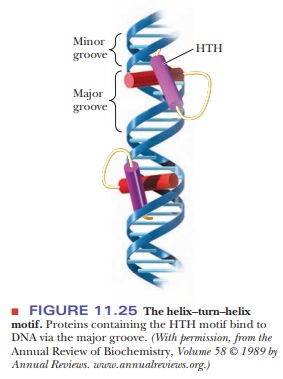 The HTH motif is a sequence of 20 amino acids that is relatively conserved in many different DNA-binding proteins. Table 11.6 shows the sequence for the HTH region of several transcription factors. The first helical region is composed of the first eight residues of the region. A sequence of three or four amino acids separates it from the second helical region. Position 9 is a glycine involved in a β-turn.

Proteins that recognize DNA with specific base sequences are more likely to bind to the major groove. The orientation of the bases in the standard base pairings puts more of the unique structure into the major groove. Figure 11.26 shows how glutamine and arginine can interact favorably with adenine and guanine, respectively. Some interactions, however, including many in the minor groove, only read the DNA indirectly. As discussed, the B form of DNA is not as constant as was once thought. Local variations in helix structure occur based on the actual sequence, especially when there are A–T rich areas. The bases undergo extensive propeller-twist. Many proteins bind to the edges of the bases that protrude into the minor groove. Studies have shown that artificial molecules that mimic the base protrusions into the minor groove are equally capable of binding to many transcription factors. 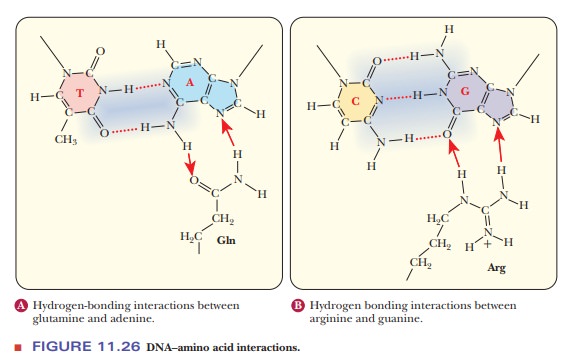 Thus, although the base pairing is clearly important to DNA, sometimes the overall shape of the bases is important for other reasons. A particular binding protein might be recognizing not the part of the base that is involved in hydro-gen bonds, but rather a part that is protruding into the grooves.

In 1985, it was discovered that a transcription factor of RNA polymerase III, TFIIIA, had nine repeating structures of 30 amino acids each. Each repeat contained two closely spaced cysteines and two closely spaced histidines 12 amino acids later. It was also found that this factor had enough associated zinc ions to bind to each of the repeats. This led to the discovery of the zinc-finger domain in DNA-binding proteins, which is represented in Figure 11.27. 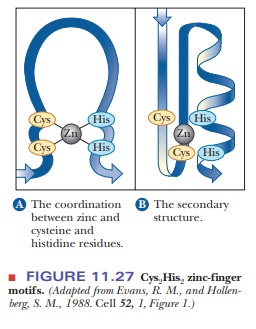 The motif gets its name from the shape adopted by the 12 amino acids that are looped out from the intersection of the two cysteines and two histidines with the zinc ion. When TFIIIA binds to DNA, the repeated zinc fingers follow the major groove around the DNA, as shown in Figure 11.28. 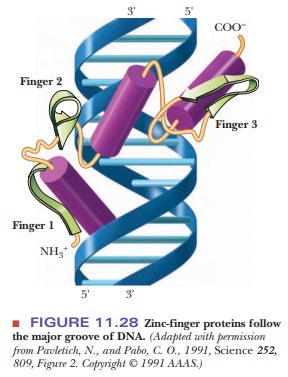 The third major class of sequence-dependent DNA-binding proteins is called the basic-region leucine zipper motif. Many transcription factors are known to contain this motif, including CREB. Figure 11.29 shows the sequence homology of several such transcription factors. Half of the protein is composed of the basic region with many conserved residues of lysine, arginine, and histidine. The second half contains a series of leucines every seven residues. The significance of the spacing of the leucines is clear. It takes 3.6 amino acids to make a turn of an α-helix. With a seven-residue spacing, the leucines all line up on one side of an α-helix, as shown in Figure 11.30. The motif gets the name zipper from the fact that the line of hydrophobic residues interacts with a second analogous protein fragment via hydrophobic bonds, interweaving themselves like a zipper. DNA-binding proteins with leucine zippers bind the DNA in the major groove via the strong electrostatic interactions between the basic region and the sugar phosphates. Protein dimers form, and the leucine half interacts with the other subunit, while the basic part interacts with the DNA, as shown in Figure 11.31. 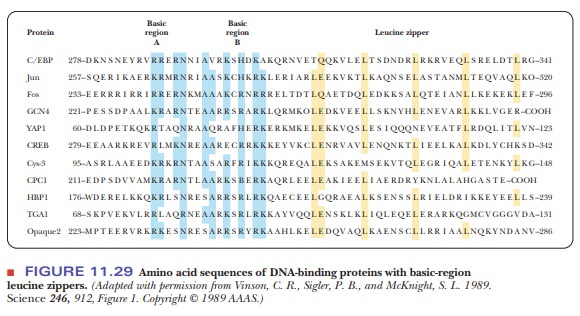 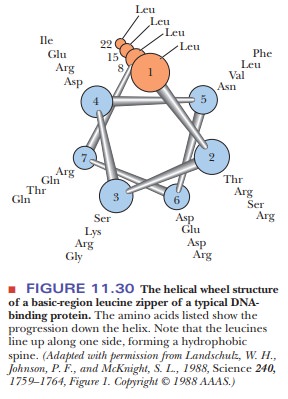 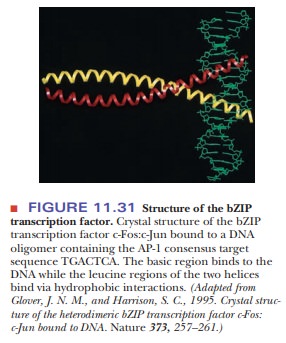 ·    Acidic domains are regions rich in acidic amino acids. Gal4 is a transcriptionfactor in yeast that activates the genes for metabolizing galactose. It has a domain of 49 amino acids, 11 of which are acidic.

·    A proline-rich domain is seen in the activator CTF-1. It has a domain of 84 amino acids, 19 of which are prolines. CTF-1 is a member of a class of transcription factors that bind to an extended promoter element called a CCAAT box. The N-terminal domain has been shown to regulate transcrip-tion of certain genes. The C-terminal end is a transcription regulator and is known to bind to histone proteins via the proline repeats. An active area of study is how transcription is linked to the acetylation of histones. The coacti-vator CBP, which was discussed in the previous section, is also a histone acetyl transferase.

Despite the seemingly overwhelming complexity of transcription factors, their elucidation has been made more manageable by the similarities in the motifs described in this section. For example, if a new protein is discovered or a new DNA sequence is elucidated, evidence of its role as a transcription factor can be determined by locating the DNA-binding protein motifs discussed in this section.

Proteins such as transcription factors that bind to DNA often have recog-nizable structural motifs.

The fact that many transcription factors and other DNA-binding proteins have such motifs has aided in the identification of these proteins when they are initially discovered.

In addition to binding DNA, many proteins involved in transcription bind to other proteins.