The economic activity in a capitalist economy will have its periodic ups and downs. The study of these ups and downs is called the study of Business cycle or Trade cycle or Industrial Fluctuation.

A Trade cycle refers to oscillations in aggregate economic activity particularly in employment, output, income, etc. It is due to the inherent contraction and expansion of the elements which energize the economic activities of the nation. The fluctuations are periodical, differing in intensity and changing in its coverage.

The four different phases of trade cycle is referred to as (i) Boom (ii) Recession (iii) Depression and (iv) Recovery. These are illustrated in the Figure 5.3. 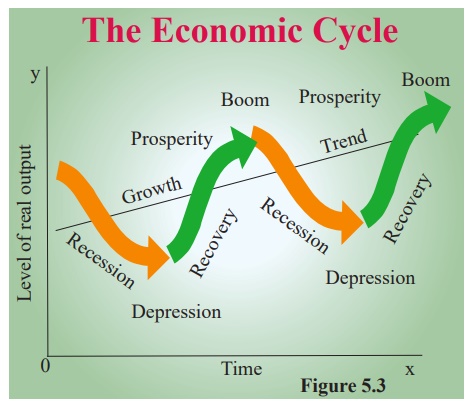 i) Boom or Prosperity Phase: The full employment and the movement of the economy beyond full employment is characterized as boom period. During this period, there is hectic activity in economy. Money wages rise, profits increase and interest rates go up. The demand for bank credit increases and there is all-round optimism.

ii) Recession: The turning point from boom condition is called recession. This happens at higher rate, than what was earlier. Generally, the failure of a company or bank bursts the boom and brings a phase of recession. Investments are drastically reduced, production comes down and income and profits decline. There is panic in the stock market and business activities show signs of dullness. Liquidity preference of the people rises and money market becomes tight.

iii) Depression: During depression the level of economic activity becomes extremely low. Firms incur losses and closure of business becomes a common feature and the ultimate result is unemployment. Interest prices, profits and wages are low. The agricultural class and wage earners would be worst hit. Banking institutions will be reluctant to advance loans to businessmen. Depression is the worst phase of the business cycle. Extreme point of depression is called as “trough”, because it is a deep point in business cycle. Any person fell down in deeps could not come out from that without other’s help. Similarly, an economy fell down in trough could not come out from this without external help. Keynes advocated that autonomous investment of the government alone can help the economy to come out from the depression.

iv) Recovery: After a period of depression, recovery sets in. This is the turning point from depression to revival towards upswing. It begins with the revival of demand for capital goods. Autonomous investments boost the activity. The demand slowly picks up and in due course the activity is directed towards the upswing with more production, profit, income, wages and employment. Recovery may be initiated by innovation or investment or by government expenditure (autonomous investment).