Both inflation and deflations are evils of economy. So, understanding of these is essential.

Both inflation and deflations are evils of economy. So, understanding of these is essential.

Inflation is a consistent and appreciable rise in the general price level. In other words, inflation is the rate at which the general level of prices for goods and services is rising and consequently the purchasing power of currency is falling. 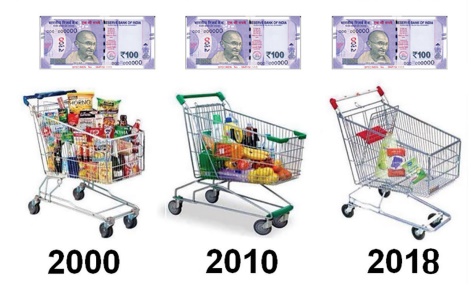 “ Too much of Money chasing too few goods”

“A state of abnormal decrease in the quantity of purchasing power”

On the basis of speed 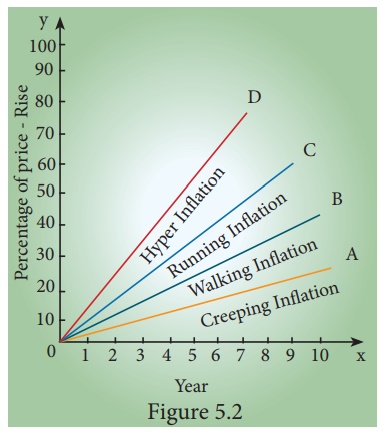 The four types of inflation are indicated in Figure-5.2.

i) Creeping Inflation: Creeping inflation is slow-moving and very mild. The rise in prices will not be perceptible but spread over a long period. This type of inflation is in no way dangerous to the economy. This is also known as mild inflation or moderate inflation.

ii) Walking Inflation: When prices rise moderately and the annual inflation rate is a single digit ( 3% - 9%), it is called walking or trolling inflation.

iii) Running Inflation: When prices rise rapidly like the running of a horse at a rate of speed of 10% - 20% per annum, it is called running inflation.

The first hyper inflation of the 21st century Zimbabwe’s annual inflation rate surged to an unprecendented 3714 percent at the end of April 2007.

i) Demand-Pull Inflation: Demand and supply play a crucial role in deciding the inflation levels in the society at all points of time. For instance, if the demand is high for a product and supply is low, the price of the products increases. 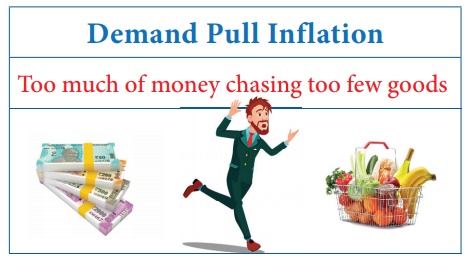 ii) Cost-Push Inflation: When the cost of raw materials and other inputs rises inflation results. Increase in wages paid to labour also leads to inflation.

Wage-price spiral is used to explain the cause and effect relationship between rising wages and rising prices or inflation.

Other types of inflation (on the basis of inducement)

i) Currency inflation: The excess supply of money in circulation causes rise in price level.

iii) Deficit induced inflation: The deficit budget is generally financed through printing of currency by the Central Bank. As a result, prices rise.

iv) Profit induced inflation: When the firms aim at higher profit, they fix the price with higher margin. So prices go up.

v) Scarcity induced inflation: Scarcity of goods happens either due to fall in production (eg. farm goods) or due to hoarding and black marketing. This also pushes up the price. (This has happened is Venezula in the year 2018)

The main causes of inflation in India are as follows:

i) Increase in Money Supply: Inflation is caused by an increase in the supply of money which leads to increase in aggregate demand. The higher the growth rate of the nominal money supply, the higher is the rate of inflation.

Government activities have been expanding due to developmental activities and social welfare programmes. This is also a cause for price rise.

iv) Increase in Consumer Spending: The demand for goods and services increases when they are given credit to buy goods on hire-purchase and installment basis.

v) Cheap Money Policy: Cheap money policy or the policy of credit expansion also leads to increase in the money supply which raises the demand for goods and services in the economy.

vi) Deficit Financing: In order to meet its mounting expenses, the government resorts to deficit financing by borrowing from the public and even by printing more notes. This raises aggregate demand in relation to aggregate supply, thereby leading to inflationary rise in prices.

viii) Repayment of Public Debt: Whenever the government repays its past internal debt tothe public, it leads to increase in the money supply with the public. This tends to raise the aggregate demand for goods and services.

ix) Increase in Exports: When exports are encouraged, domestic supply of goods decline. So prices rise.

The effects of inflation can be classified into two heads:

(1) Effects on Production and

When the inflation is very moderate, it acts as an incentive to traders and producers. This is particularly prior to full employment when resources are not fully utilized. The profit due to rising prices encourages and induces business class to increase their investments in production, leading to generation of employment and income.

i)  However, hyper-inflation results in a serious depreciation of the value of money and it discourages savings on the part of the public.

ii)  When the value of money undergoes considerable depreciation, this may even drain out the foreign capital already invested in the country.

iii)  With reduced capital accumulation, the investment will suffer a serious set-back which may have an adverse effect on the volume of production in the country. This may discourage entrepreneurs and business men from taking business risk.

iv)  Inflation also leads to hoarding of essential goods both by the traders as well as the consumers and thus leading to still higher inflation rate.

ii) Fixed-income Groups: The fixed income groups are the worst hit during inflation because their incomes being fixed do not bear any relationship with the rising cost of living. Examples are wage, salary, pension, interest, rent etc.

iii) Entrepreneurs: Inflation is the boon to the entrepreneurs whether they are manufacturers, traders, merchants  or businessmen, because it serves as a tonic for business enterprise. They experience windfall gains as the prices of their inventories (stocks) suddenly go up.

iv) Investors: The investors, who generally invest in fixed interest yielding bonds and securities have much to lose during inflation. On the contrary those who invest in shares stand to gain by rich dividends and appreciation in value of shares.

Keynes and Milton Friedman together suggested three measures to prevent and control of inflation.

i) Monetary Measures: These measures are adopted by the Central Bank of the country. They are (i) Increase in Bankrate (ii) Sale of Government Securities in the Open Market (iii) Higher Cash Reserve Ratio (CRR) and Statutory Liquidity Ratio (SLR) iv) Consumer  Credit  Control  and Higher margin requirements (vi) Higher Repo Rate and Reverse Repo Rate.

iii) Other Measures: These measures can be divided broadly into short-term and long-term measures.

a) Short-term measures can be in regard to public distribution of scarce essential commodities through fair price shops (Rationing). In India whenever shortage of basic goods has been felt, the government has resorted to import so that inflation may not get triggered.

b) Long-term  measures  will  require accelerating economic growth especially of the wage goods which have a direct bearing on the general price and the cost of living. Some restrictions on present consumption may help in improving saving and investment which may be necessary for accelerating the rate of economic growth in the long run.