In the vast majority of patients, infection with T. gondii is completely asymptomatic. Clinical manifestations, when they do appear, vary with the type of host involved.

In the vast majority of patients, infection with T. gondii is completely asymptomatic. Clinical manifestations, when they do appear, vary with the type of host involved. In general, they may be grouped into one of the three syndromes listed below.

Immune mechanisms are poorly developed in utero. As a result, a large proportion of fetal infections results in clinical illness. If the infection spreads to the central nervous system, the outcome is often catastrophic. Abortion and stillbirth are the most serious conse-quences. Liveborn children may demonstrate microcephaly, hydrocephaly, cerebral calci-fications, convulsions, and psychomotor retardation. Disease of this severity is usually accompanied by evidence of visceral involvement, including fever, hepatitis, pneumonia, and skin rash. Infants infected later in prenatal development demonstrate milder disease. Many appear healthy at birth but develop epilepsy, retardation, or strabismus months or years later. Probably the most common delayed manifestation of congenital toxoplasmo-sis is chorioretinitis. This condition, which is thought to result from the reactivation of la-tent tissue cysts, typically presents during the second or third decade of life as recurrent bouts of eye pain and loss of visual acuity. The lesions are usually bilateral but focal. If the retinal macula is not involved, vision improves as the inflammation subsides. T. gondii accounts for 25% of all cases of granulomatous uveitis seen in the United States.

The most common clinical manifestation of toxoplasmosis acquired after birth is asymp- tomatic localized lymphadenopathy. The cervical nodes are most frequently involved, but nontender enlargement of other regional groups, including the retroperitoneal nodes, also occurs. Attimes,theadenopath isaccompaniedbyfever,sorethroat,rash,hep- atosplenomegaly, and atypical lymphocytosis, thus mimicking the clinical and laboratory manifestations of infectious mononucleosis. Occasionally the normal host develops se- vere visceral involvement, which may be manifested as meningoencephalitis, pneumoni- tis, myocarditis, or hepatitis. Chorioretinitis following postnatally acquired infection, al-though documented, is uncommon. Unlike congenitally acquired ocular disease, it occurs during midlife and is generally unilateral.

In the immunocompromised host, toxoplasmosis is a serious, often fatal disease. If pri-mary infection is acquired while a patient is undergoing immunosuppressive therapy for malignancy or organ transplantation, widespread dissemination of the infection with necrotizing pneumonitis, myocarditis, and encephalitis may occur. More commonly, acute disease in this population results from the activation of chronic, latent infection by immunosuppressive therapy, or the acquisition of a concurrent immunosuppressive infec-tion, particularly acquired immunodeficiency syndrome (AIDS). Encephalitis occurs in 50% of such cases and in more than 90% of fatal cases. Toxoplasmic encephalitis is par-ticularly common in AIDS patients; it is seen in approximately 10% of those with circu-lating toxoplasma antibodies. As such, it is a major cause of morbidity and mortality in this patient population. Clinically, encephalitis may present as a meningoencephalitis, dif-fuse encephalopathy, or mass lesion.

The diagnosis may be established by a variety of methods. In acute toxoplasmic lym-phadenitis, the histologic appearance of the involved nodes is often pathognomonic. The trophozoite may be demonstrated in tissue with Wright or Giemsa stain. Electron mi-croscopy and indirect fluorescent antibody techniques have also been used successfully on heart transplant or brain tissue obtained by biopsy. Although tissue cysts are selec-tively stained by periodic acid–Schiff, their presence is not indicative of acute disease. Isolation of the organism can be accomplished by inoculating blood or other body fluids into mice or tissue cultures. Inoculation of other tissues is not usually helpful, because a positive result may only reflect the presence of latent tissue cysts.

Serologic procedures are the primary method of diagnosis. To establish the presence of acute infection, it is usual to demonstrate a fourfold rise in the IgG antibody titer between acute and convalescent serum specimens. Peak titers are often reached within 4 to 8 weeks, so the acute serum must be collected early in the course of illness. Of the many tests developed for the detection of IgG antibodies, the indirect hemagglutination test and the indirect fluorescent antibody test are those most frequently used; they both are sensitive and highly specific. With these tests, titers of 1:1000 or more are usually detected after an acute infection. These levels gradually fall but may remain high for many years.

The detection of IgM antibodies provides a more rapid confirmation of acute infec-tion. As detected by an indirect fluorescent antibody technique, these antibodies appear within the first week of infection, peak in 2 to 4 weeks, and quickly revert to negative. It also appears that IgM antibodies are produced after reactivation of latent disease. A single high titer (1:80 or more) therefore establishes the presence of acute infection or reactiva-tion. Unfortunately, this test has been difficult to standardize, lacks sensitivity in neonates and immunocompromised (particularly AIDS) hosts, and is not widely available. Re-cently introduced enzyme immunoassays (EIA) for IgM antibody circumvent many of these difficulties, but still produce some false-positive results, and are not sufficiently sen-sitive in AIDS patients. A modification of the EIA procedure, the antibody-capture enzyme immunoassay, significantly improves both the sensitivity and specificity of the original procedure. Examination of urine and other body fluids for the presence of toxo-plasma antigen, or DNA by the polymerase chain reaction, have been shown to be useful adjunctive tests in immunocompromised individuals; currently these procedures are not generally available to clinical laboratories.

Usually, patients do not require therapy unless symptoms are particularly severe and per-sistent or unless vital organs, such as the eye, are involved. Immunocompromised and pregnant women, however, should be treated if acute infection (or reactivation) is docu-mented (Table 52–3). Routine serial serologic testing of such individuals would allow early detection of infected patients and enhance the prospects of a successful outcome. It is now clear that early treatment of acutely infected pregnant women significantly reduces the incidence of severe congenital infections and reduces the ratio of benign to subclinical forms in infants. At present, the most commonly used therapeutic regimen in the United States is the combination of pyrimethamine and sulfonamides. Unfortunately, the former drug is teratogenic and should not be used in the first trimester of pregnancy; spiramycin, a cytostatic macrolide, is often substituted in this setting. 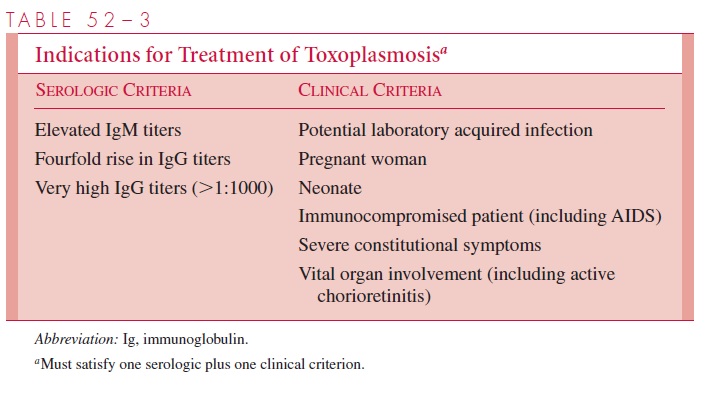 Although the pyrimethamine–sulfonamide combination is very effective against tachy-zoites, it is inactive against the cyst forms. As both parasitic forms are present in patients with toxoplasmic encephalitis, recrudescence of illness generally follows completion of standard therapy in AIDS patients. This may be prevented by initiating chronic, low-dose suppressive therapy following the completion of the standard regimen. Atovaquone, a re-cently introduced hydroxynaphthoquinone, possesses activity against both tachyzoites and cysts. Its use, therefore, may result in radical cure of toxoplasma encephalitis, eliminating the need for chronic suppression.

Prevention should be directed primarily at pregnant women and immunologically compromised hosts. Hands should be carefully washed after handling uncooked meat. Cysts in meat can be destroyed by proper cooking (56°C for 15 min) or by freezing to –20°C. Cat feces should be avoided, particularly the changing of litter boxes.