Of all infectious diseases there is no doubt that malaria has caused the greatest harm to the greatest number.

Of all infectious diseases there is no doubt that malaria has caused the greatest harm to the greatest number.

The plasmodia are sporozoa in which the sexual and asexual cycles of reproduction are completed in different host species. The sexual phase occurs within the gut of mosqui-toes. These arthropods subsequently transmit the parasite while feeding on a vertebrate host. Within the red blood cells (RBCs) of the vertebrate, the plasmodia reproduce asexu-ally; they eventually burst from the erythrocyte and invade other uninvolved RBCs. This event produces periodic fever and anemia in the host, a disease process known as malaria. Of the many species of plasmodia, four are known to infect humans and will be consid-ered here: Plasmodium vivax, P. ovale, P. malariae, and P. falciparum.

The morphology of the stained intraerythrocytic parasites is shown in Figure 52–1. In stained smears, three characteristic features aid in the identification of plasmodia: red nuclear chromatin; blue cytoplasm; and brownish-black malarial pigment, or hemozoin, consisting largely of a hemoglobin degradation product, ferriprotoporphyrin IX. The change in the shape of the cytoplasm and the division of the chromatin at different stages of parasite development are obvious. Gametocytes can be differentiated from the asexual forms by their large size and lack of nuclear division. Some of the infected erythrocytes develop membrane invaginations or caveolae–vesicle complexes, which are thought to be responsible for the appearance of the pink Schüffner’s dots or granules . 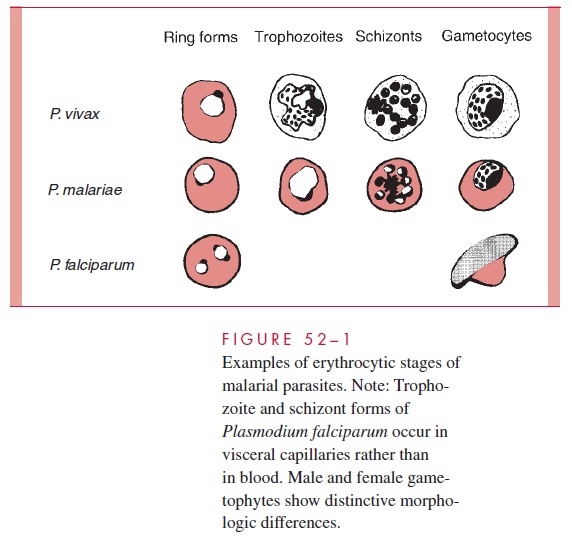 The appearance of each of the four species of plasmodia that infect humans is suffi-ciently different to allow their differentiation in stained smears. The parasitized erythro-cyte in P. vivax and P. ovale infections is pale, enlarged, and contains numerous Schüffner’s dots. All asexual stages (trophozoite, schizont, merozoite) may be seen simul-taneously. Cells infected by P. ovale are elongated and frequently irregular or fimbriated in appearance. In P. malariae infections, the RBCs are not enlarged and contain no gran-ules. The trophozoites often present as “band” forms, and the merozoites are arranged in rosettes around a clump of central pigment. In P. falciparum infections, the rings are very small and may contain two chromatin dots rather than one. There is often more than one parasite per cell, and parasites are frequently seen lying against the margin of the cell. In-tracytoplasmic granules known as Maurer’s dots may be present but are often cleft shaped and fewer in number than Schüffner’s dots. Schizonts and merozoites are not present in the peripheral blood. Gametocytes are large and banana shaped. These characteristics are summarized in Table 52–1. 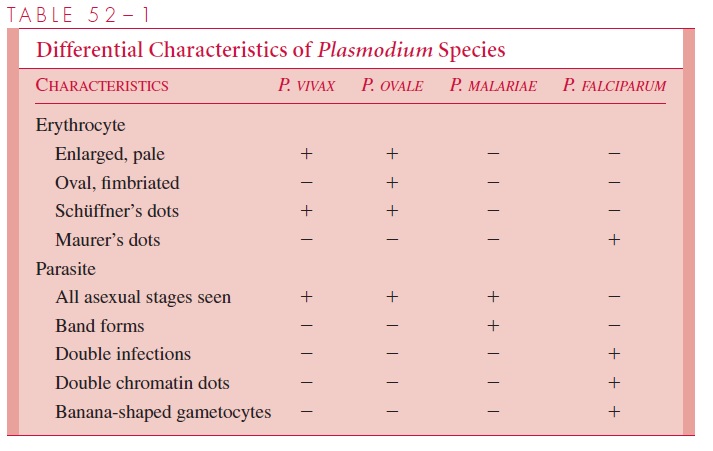 Sporogony, or the sexual cycle, begins when a female mosquito of the genus Anopheles ingests circulating male and female gametocytes while feeding on a malarious human. In the gut of the mosquito, the gametocytes mature and effect fertilization. The resulting zy-gote penetrates the mosquito’s gut wall, lodges beneath the basement membrane, and vac-uolates to form an oocyst. Within this structure, thousands of sporozoites are formed. The enlarging cyst eventually ruptures, releasing the sporozoites into the body cavity of the mosquito. Some penetrate the salivary glands, rendering the mosquito infectious for hu-mans. The time required for the completion of the cycle in mosquitoes varies from 1 to 3 weeks, depending on the species of insect and parasite as well as on the ambient tem-perature and humidity.

Schizogony, the asexual cycle, occurs in the human and begins when the infected Anopheles takes a blood meal from another individual. Sporozoites from the mosquito’ssalivary glands are injected into the human’s subcutaneous capillaries and circulate in the peripheral blood. Within 1 hour they attach to and invade liver cells (hepatocytes), a process thought to be mediated by a ligand present in the sporozoites’ outer protein coat (circumsporozoite protein). In P. vivax and P. ovale infections, some of the sporozoites enter a dormant state immediately after cell invasion. The remaining sporozoites initiate exoerythrocytic schizogony, each producing about 2000 to 40,000 daughter cells, or merozoites. One to two weeks later, the infected hepatocytes rupture, releasing mero-zoites into the general circulation.

The erythrocytic phase of malaria starts with the attachment of a released hepatic merozoite to a specific receptor on the RBC surface. After attachment, the merozoite in-vaginates the cell membrane and is slowly endocytosed. The intracellular parasite initially appears as a ring-shaped trophozoite, which enlarges and becomes more active and irreg-ular in outline. Within a few hours, nuclear division occurs, producing the multinucleated schizont. Cytoplasm eventually condenses around each nucleus of the schizont to form an intraerythrocytic cluster of 6 to 24 merozoite daughter cells. About 48 (P. vivax, P. ovale, and P. falciparum) to 72 (P. malariae) hours after initial invasion, infected erythrocytes rupture, releasing the merozoites and producing the first clinical manifestations of dis-ease. The newly released daughter cells invade other RBCs, where most repeat the asex-ual cycle. Other daughter cells are transformed into sexual forms or gametocytes. These latter forms do not produce RBC lysis, and continue to circulate in the peripheral vascula-ture until ingested by an appropriate mosquito. The recurring asexual cycles continue, in-volving an ever-increasing number of erythrocytes until finally the development of host immunity brings the erythrocytic cycle to a close. The dormant hepatic sporozoites of P.vivax and P. ovale survive the host’s immunologic attack, and may, after a latent period ofmonths to years, resume intrahepatic multiplication. This leads to a second release of he-patic merozoites and the initiation of another erythrocytic cycle, a phenomenon known as relapse. The life cycle of malarial parasites is summarized in Figure 52–2. 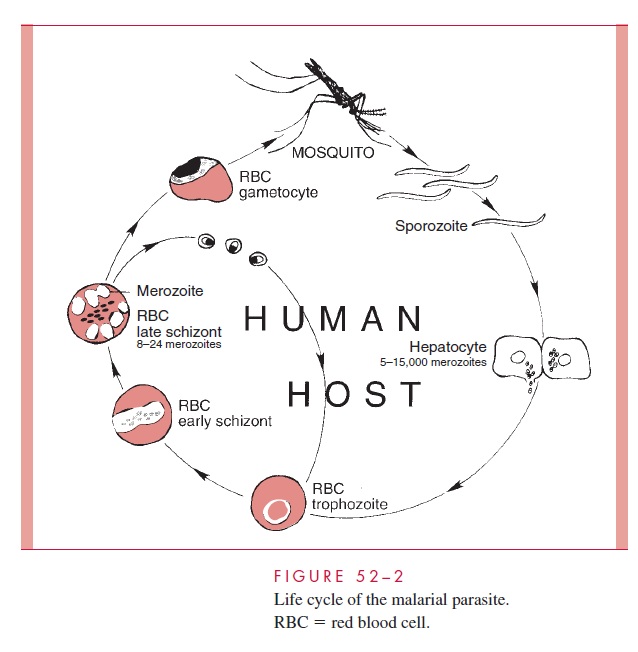 During infection with these species, therefore, nomore than 1 to 2% of the cell population is involved. P. falciparum, in contrast, invades RBCs regardless of age and may produce very high levels of parasitemia and particularly serious disease. In part, these differences may be related to the known differences in the RBC receptor sites available to the individual Plasmodium species. In the case of P. vivax, the site is closely related to the Duffy blood group antigens (Fya and Fyb ). Duffy-nega-tive individuals, who constitute the majority of people of West African ancestry, are there-fore resistant to vivax malaria. RBC sialoglycoprotein, particularly glycoprotein A, has been implicated as the P. falciparum receptor site.

Certain RBC abnormalities may also effect parasitism. The altered hemoglobin (he-moglobin S) associated with the sickle cell trait limits the intensity of the parasitemia caused by P. falciparum, and thereby provides a selective advantage to individuals who are heterozygous for the sickle cell gene. As a result, the sickle cell gene, which would otherwise be disadvantageous, is found at high frequency in populations living in malari-ous areas. Parasite growth appears to be retarded in RBCs heterozygous for hemoglobin S (SA) when they are exposed to conditions of reduced oxygen tension such as might be present in the visceral capillaries. Sickling may also render the erythrocyte more suscepti-ble to phagocytosis or directly damage the parasite. A similar protective effect may be ex-erted by hemoglobins C, D, and E; thalassemias; and glucose-6-phosphate dehydrogenase (G6PD) or pyridoxal kinase deficiencies, because these abnormalities have also been found more frequently in malarious areas. The protection in these conditions may be re-lated to the increased susceptibility of such RBCs to oxidant stress. In thalassemia, the protection may also be related in part to the production of fetal hemoglobin, which re-tards maturation of P. falciparum, as well as an increased binding of antibodies to modi-fied parasitic antigens (neoantigens) presenting on the surface of the erythrocytes.

Once invasion has occurred, malaria parasites may induce a number of changes in the erythrocytic membrane. These include alteration of its lipid concentration, modification of its osmotic properties, and incorporation of parasitic neoantigens, rendering the RBC susceptible to immunologic attack. P. vivax and P. ovale stimulate the production of cave-olae–vesicle complexes, which are visualized as Schüffner’s dots in stained smears. In P.falciparum infections, electron-dense elevated knobs or excrescences form on the RBC surface. These produce a strain specific, high-molecular-weight adhesive protein (PfEMP1), which mediates binding to receptors on the endothelium of capillaries and postcapillary venules of the brain, placenta, and other organs, where they can produce ob-struction and microinfarcts.

Malarial parasites generate energy by the anaerobic metabolism of glucose. They ap-pear to satisfy their protein requirements by the degradation of hemoglobin within their acidic food vacuoles, resulting in the formation of the malarial pigment (hemozoin) men-tioned previously. It has been estimated that the average plasmodium destroys between 25 and 75% of the hemoglobin of its host erythrocyte. Unlike their vertebrate hosts, malarial parasites synthesize folates de novo. As a result, antifolate antimicrobics such as pyrimethamine are effective antimalarial agents.

GROWTH IN THE LABORATORY

Continuous in vitro cultivation of plasmodia in human erythrocytes was first achieved in 1976. More recently, the successful in vitro completion of the entire sporogonic cycle, from ookinete to sporozoite, has been achieved. These twin developments provide new opportunities for studying the biology, immunology, and chemotherapy of human malaria. The most immediate impact of these advances has been on the introduction of methods for testing the sensitivity of P. falciparum to chemotherapeutic agents. Ultimately, these agents will play critical roles in the development of effective antimalar-ial vaccines.