Malaria has a worldwide distribution between 45°N and 40°S latitude, generally at alti-tudes below 1800μm.

Malaria has a worldwide distribution between 45°N and 40°S latitude, generally at alti-tudes below 1800μm. P. vivax is the most widely distributed of the four species, and to-gether with the uncommon P. malariae, is found primarily in temperate and subtropical areas. P. falciparum is the dominant organism of the tropics. P. ovale is rare and found principally in Africa.

The intensity of malarial transmission in an endemic area depends on the density and feeding habits of suitable mosquito vectors and the prevalence of infected humans, who serve as parasite reservoirs. In hyperendemic areas (areas where more than half of the population is parasitemic), transmission is usually constant, and disease manifestations are moderated by the development of immunity. Mortality is largely restricted to infants and to nonimmune adults who migrate into the region. When the prevalence of disease is lower, transmission is typically intermittent. In this situation, solid immunity does not develop and the population suffers repeated, often seasonal, epidemics, the impact of which is shared by people of all ages.

Presently, it is estimated that 2 billion people live in malaria endemic areas in 103 of the poorest countries of Africa, Asia, Latin America, and Oceania (Fig 52–3). Between 25 and 50% of these persons are thought to be carrying the malaria parasite at any given time. From 1 to 3 million individuals, primarily African children, die of this disease annually. A recent study concluded that the development of resistance to chloroquine, the single most widely used antimalarial agent, has increased mortality four- to eight-fold. Although endemic malaria disappeared from the United States three decades ago, imported cases continue to be reported, and the recent worldwide resurgence of malaria combined with an increase in international travel has resulted in an increase in the num-ber of US cases to approximately 1000 annually. 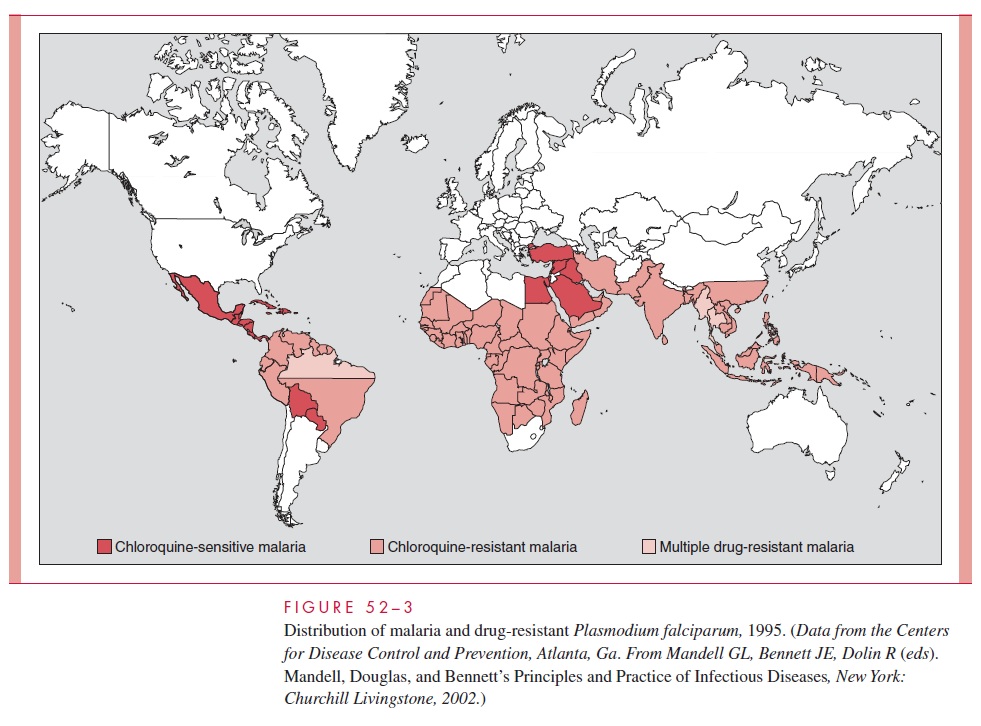 Forty-five percent of patients with im-ported malaria have acquired the disease in Africa, 30% in Asia, and 10% in the Caribbean or Latin America. Fifty percent of recent infections have involved American travelers: nearly 60% of these acquired their infection in Africa. Clinical manifestations typically develop within 6 months of arrival of cases in the United States; however, one fourth of cases caused by P. vivax are delayed beyond that time. Approximately 40% of imported cases and almost all associated fatalities have been caused by the virulent P.falciparum. Tragically, most of these cases could have been prevented or successfullytreated. Congenital malaria in infants born in the United States of mothers from malari-ous areas is occasionally observed. Infections transmitted by transfusions of whole blood, leukocytes, or platelets, or by organ transplantation are, fortunately, now unusual in this country due to the improved screening procedures of blood banks. Anopheline mosquitoes capable of transmitting malaria are present in the United States, and, rarely, malaria is transmitted from an imported case to individuals who have never traveled out-side of the country.