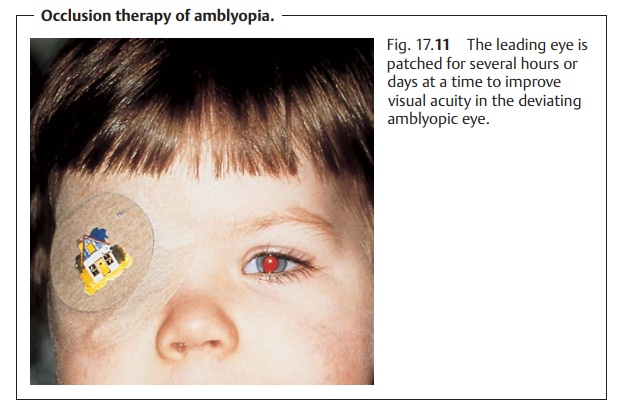 Therapy of concomitant strabismus in children:

Treatment is generallylong-term. The duration of treatment may extend from the first months of life to about the age of twelve. Specific treatments and therapeutic success are determined not only by the clinical course but also by the child’s overall per-sonality and the parents’ ability to cooperate. The entire course of treatment may be divided into three phases with corresponding interim goals.

1.        The ophthalmologist determines whether the cause of the strabismus may be treated with eyeglasses (such as hyperopia).

2. If the strabismus cannot be fully corrected with eyeglasses, the next step in treatment (parallel to prescribing eyeglasses) is to minimize the risk of amblyopia by occlusion therapy.

3. Once the occlusion therapy has produced sufficient visual acuity in both eyes, the alignment of one or both eyes is corrected by surgery. Late stra-bismus with normal sensory development is an exception to this rule (for further information, see Surgery). The alignment correction is required for normal binocular vision and has the added benefit of cosmetic improvement.

Therapy of concomitant strabismus in adults:

The only purpose of surgeryis cosmetic improvement. A functional improvement in binocular vision can no longer be achieved.

Where the strabismus is due to a cause that can be treated with eyeglasses, then eyeglasses can eliminate at least the accommodative component of the disorder. Often residual strabismus requiring further treatment will remain despite eyeglass correction.

Treatment and Avoidance of Strabismic Amblyopia

Strict occlusion therapy by eye patching or eyeglass occlusion is the most effective method of avoiding or treating strabismic amblyopia. Primarily theleading eye is patched.

Severe amblyopia with eccentric fixation requires an eye patch(Fig. 17.11). Eyeglass occlusion (see next section) entails the risk that the child might attempt to circumvent the occlusion of the good eye by looking over the rim of the eyeglasses with the leading eye. This would compromise the effectiveness of occlusion therapy, whose purpose is to train the amblyopic eye. 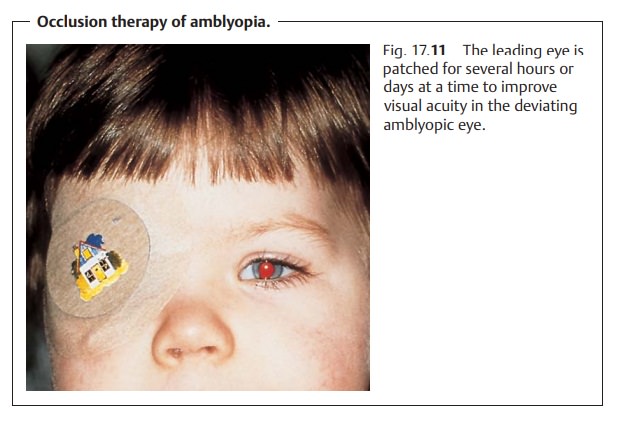 Mild cases of amblyopia usually may be treated success-fully by covering the eyeglass lens of the leading eye with an opaque material. In such cases, the child usually does not attempt to look over the rim of the eyeglasses because the deviating eye has sufficient visual acuity.

The duration of occlusion therapy must be balanced so as to avoida loss of visual acuity in the leading eye. The leading eye is occluded for several hours at a time in mild amblyopia, and for several days at a time in severe amblyopia depending to the patient’s age. For example, the nondeviat-ing eye in a four-year-old patient is patched for four days while the deviating eye is left uncovered. Both eyes are then left uncovered for one day. This treat-ment cycle is repeated beginning on the following day.

Amblyopia must be treated in early childhood. The younger the child is, the more favorable and rapid the response to treatment will be. The upper age limit for occlusion therapy is approximately the age of nine. The earlier therapy is initiated, the sooner amblyopia can be eliminated.

The goal of treatment in infantile strabismus is to achievealternating stra-bismus with full visual acuity and central fixation in both eyes. Binocularvision is less important in this setting. It is not normally developed anyway in patients who develop strabismus at an early age and cannot be further improved.

Surgery should be postponeduntil after amblyopia has been successfully treated (see previous section). It is also advisable to wait until the patient has reached a certain age. Adequate follow-up includes precise measurement of visual acuity at regular intervals in tests that require the patient’s cooperation, and such cooperation is diffi-cult to ensure in young patients below the age of four. Surgical correction in a very young patient prior to successful treatment of amblyopia involves a risk that a decrease in visual acuity in one eye may go unnoticed after the stra-bismus has been corrected. However, the child should undergo surgery prior to entering school so as to avoid the social stigma of strabismus. In such a case, surgery achieves only a cosmetic correction of strabismus.

In thiscase, surgery should be performed as early as possible because the primary goal is to preserve binocular vision, which is necessarily absent in infantile strabismus syndrome. 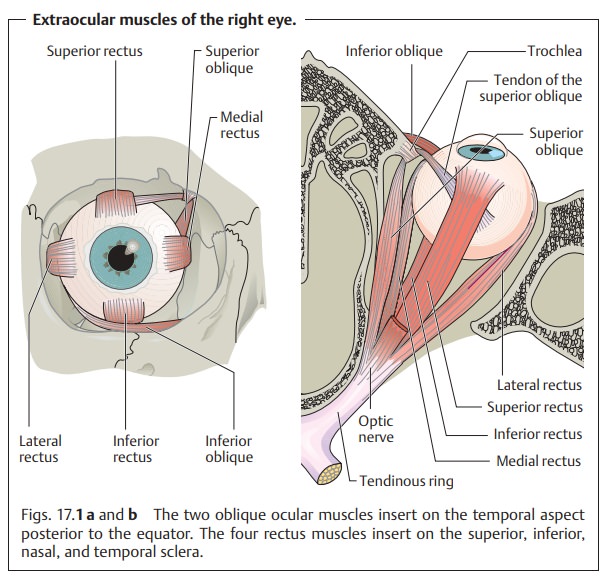