This is a fundamental examination and is usually the first one performed by the ophthalmologist in patients with suspected concomitant strabismus. The examiner holds the light beneath and close to his or her own eyes and observes the light reflexes on the patient’s corneas (Hirschberg’s method) in near fixation at a distance of 30 cm. Normally, these reflexes are symmetrical. Strabismus is present if the corneal reflex deviates in one eye. The corneal reflexes are symmetrical in normal binocular vision or pseudostrabismus; in esotropia, exotropia, and vertical deviation, they are asymmetrical.

Strabismus occurs most frequently in the newborn and infants and must also be treated at this age to minimize the risk of visual impairment. As the examiner cannot rely on patient cooperation at this age, examination tech-niques requiring minimal patient cooperation are necessary. The preferential looking test can be used for early evaluation of vision beginning at the age of four to six months. This test cannot reliably detect strabismic amblyopia. However, Teller acuity cards (Fig. 17.7) are sufficiently sensitive for early detection of deficits in the presence of defects of the entire visual system. 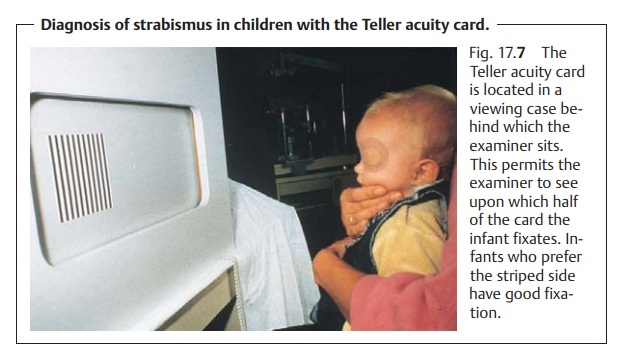 The infant is shown a card (Teller acuity card) with the samebackground brightness. The examiner is hidden behind a viewing case that covers him or her from the front and side. An observation pinhole in the middle of the card permits the examiner to observe only the infant’s eyes and determine upon which side of the card the infant is fixating. Infants who pre-fer the striped side have good fixation.

A unilateral cover test can distinguish between manifest unilateral stra-bismus and alternating strabismus. The patient is requested to fixate on a point. The examiner than covers one eye and observes the uncovered eye (Fig. 17.8a – c). 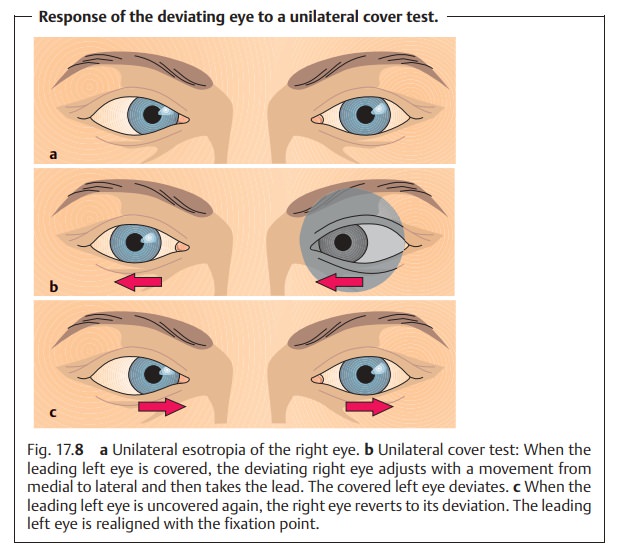 Measuring the Angle of Deviation

Prism bars simplify the examination. These bars contain a series of prismsof progressively increasing strength arranged one above the other.

Maddox’s cross (Fig. 17.9) is a device often used to measure the angle ofdeviation. A light source mounted in the center of the cross serves as a fixa-tion point. The patient fixates the light source with his or her leading eye. The objective angle of deviation is measured with prisms as described above. Inchildren, often only the objective angle of deviation is measured as this measurement does not require any action on the part of the patient except for fixating a certain point, in this case the light source at center of the cross. In adults, the examiner can ask the patient to describe the location of the area ofdouble vision (double vision may be a sequela of paralytic strabismus, whichis the most common form encountered in adults). This uses the graduations on the Maddox’s cross. The cross has two scales, a large numbered scale for testing at five meters and a fine scale for testing at one meter (see Fig. 17.9). The patient describes the location of the area of double vision according to a certain number on this scale. The examiner selects the appropriate prism cor-rection according to the patient’s description to correct the angle of deviation of the paralyzed eye. This superimposes the images seen by the deviating eye and the nondeviating eye to eliminate the double vision. 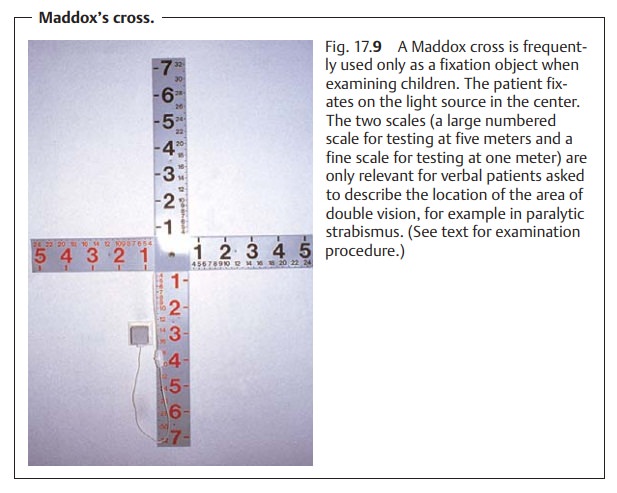 Determining the Type of Fixation

This examination is used to ascertain which part of the retina of the deviatingeye the image of the fixated point falls on. The patient looks through a specialophthalmoscope and fixates on a small star that is imaged on the fundus of the eye. The examiner observes the fundus.

❖Incentral fixation, the image of the star falls on the fovea centralis.

❖Ineccentric fixation, the image of the star falls on an area of the retina out-

side the fovea (Fig. 17.10). Usually this point lies between the fovea and the optic disk. 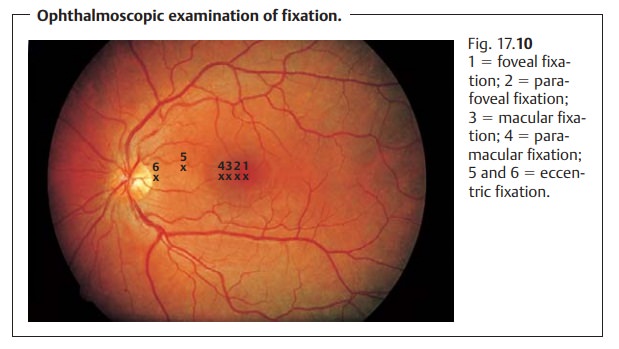 This test uses flat lenses with fine parallel striations. The stria-tions spread light from a point source into a strip. The lenses are mounted in the examination eyeglasses in such a manner that the strips of light form a diagonal cross in patients with intact binocular vision. The patient is asked to describe the pattern of the strips of light while looking at the point source. Patients who describe a cross have normal simultaneous vision. Patient who see only one diagonal strip of light are suppressing the image received by the respective fellow eye.

This test may be used to determine depth perception in infants. Acard depicts various objects that the child only sees if it can perceive depth.