Jean Baptiste de Lamarck, was the first to postulate the theory of evolution in his famous book ‘Philosophie Zoologique’ in the year 1809. The two principles of Lamarckian theory are:

i. The theory of use and disuse - Organs that are used often will increase in size and those that are not used will degenerate. Neck in giraffe is an example of use and absence of limbs in snakes is an example for disuse theory.

The main objection to Lamarckism

Lamarck’s “Theory of Acquired characters” was disproved by August Weismann who conducted experiments on mice for twenty generations by cutting their tails and breeding them. All mice born were with tail. Weismann proved that change in the somatoplasm will not be transferred to the next generation but changes in the germplasm will be inherited.

The followers of Lamarck (Neo-Lamarckists) like Cope, Osborn, Packard and Spencer tried to explain Lamarck’s theory on a more scientific basis. They considered that adaptations are universal. Organisms acquire new structures due to their adaptations to the changed environmental conditions. They argued that external conditions stimulate the somatic cells to produce certain ‘secretions’ which reach the sex cells through the blood and bring about variations in the offspring.

Charles Darwin explained the theory of evolution in his book ‘The Origin of Species by Natural Selection’. During his journey around the Earth, he made extensive observations of plants and animals. He noted a huge variety and remarkable similarities among organisms and their adaptive features to cope up to their environment. He proved that fittest organisms can survive and leave more progenies than the unfit ones through natural selection.

Darwin’s theory was based on several facts, observations and influences. They are:

1. Over production (or) prodigality of production

All living organisms increase their population in larger number. For example, Salmon fish produces about 28 million eggs during breeding season and if all of them hatch, the seas would be filled with salmon in few generations. Elephant, the slowest breeder that can produce six young ones in its life time can produce 6 million descendants at the end of 750 years in the absence of any check.

Organisms struggle for food, space and mate. As these become a limiting factor, competition exists among the members of the population. Darwin denoted struggle for existence in three ways –

Intra specific struggle between the same species for food, space and mate.

Inter specific struggle with different species for food and space.

Struggle with the environment to cope with the climatic variations, flood, earthquakes, drought, etc.,

No two individuals are alike. There are variations even in identical twins. Even the children born of the same parents differ in colour, height, behavior, etc., The useful variations found in an organism help them to overcome struggle and such variations are passed on to the next generation.

4.  Origin of species by Natural Selection

According to Darwin, nature is the most powerful selective force. He compared origin of species by natural selection to a small isolated group. Darwin believed that the struggle for existence resulted in the survival of the fittest. Such organisms become better adapted to the changed environment.

Some objections raised against Darwinism were –

·            He focused on small fluctuating variations that are mostly non-heritable.

·            He did not distinguish between somatic and germinal variations.

·            He could not explain the occurrence of vestigial organs, over specialization of some organs like large tusks in extinct mammoths, oversized antlers in the extinct Irish deer, etc.,

Neo Darwinism is the interpretation of Darwinian evolution through Natural Selection as it has been modified since it was proposed. New facts and discoveries about evolution have led to modifications of Darwinism and is supported by Wallace, Heinrich, Haeckel, Weismann and Mendel. This theory emphasizes the change in the frequency of genes in population arises due to mutation, variation, isolation and Natural selection.

Hugo de Vries put forth the Mutation theory. Mutations are sudden random changes that occur in an organism that is not heritable. De Vries carried out his experiments in the Evening Primrose plant (Oenothera lamarckiana) and observed variations in them due to mutation.

·            Mutations or discontinuous variation are transmitted to other generations.

·            In naturally breeding populations, mutations occur from time to time.

i.               Gene mutation refers to the changes in the structure of the gene. It is also called gene/ point mutation. It alters the phenotype of an organism and produces variations in their offspring.

ii.Chromosomal mutation refers to the changes in the structure of chromosomes due to deletion, addition, duplication, inversion or translocation. This too alters the phenotype of an organism and produces variations in their offspring.

iii.               Genetic recombination is due to crossing over of genes during meiosis. This brings about genetic variations in the individuals of the same species and leads to heritable variations.

iv.               Natural selection does not produce any genetic variations but once such variations occur it favours some genetic changes while rejecting others (driving force of evolution).

Natural selection can be explained clearly through industrial melanism. Industrial melanism is a classical case of Natural selection exhibited by the peppered moth, Biston betularia. These were available in two colours, white and black. Before industrialization peppered moth both white and black coloured were common in England. Pre- industrialization witnessed white coloured background of the wall of the buildings hence the white coloured moths escaped from their predators. Post industrialization, the tree trunks became dark due to smoke and soot let out from the industries. The black moths camouflaged on the dark bark of the trees and the white moths were easily identified by their predators. Hence the dark coloured moth population was selected and their number increased when compared to the white moths. Nature offered positive selection pressure to the black coloured moths. The above proof shows that in a population, organisms that can adapt will survive and produce more progenies resulting in increase in population through natural selection.

Artificial selection is a byproduct of human exploitation of forests, oceans and fisheries or the use of pesticides, herbicides or drugs. For hundreds of years humans have selected various types of dogs, all of which are variants of the single species of dog. If human beings can produce new varieties in short period, then “nature” with its vast resources and long duration can easily produce new species by selection.

Their common ancestor arrived on the Galapagos about 2 million years ago. During that time, Darwin's finches have evolved into 14 recognized species differing in body size, beak shape and feeding behavior. 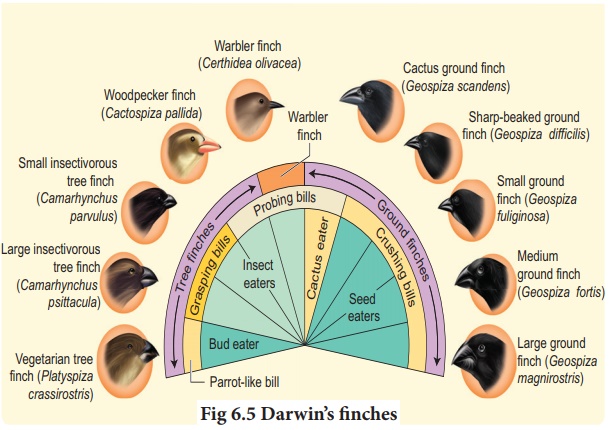 Changes in the size and form of the beak have enabled different species to utilize different food resources such as insects, seeds, nectar from cactus flowers and blood from iguanas, all driven by Natural selection. Fig. 6.5 represents some of the finches observed by Darwin. Genetic variation in the ALX1 gene in the DNA of Darwin finches is associated with variation in the beak shape. Mild mutation in the ALX1 gene leads to phenotypic change in the shape of the beak of the Darwin finches.