Paleontology is the study of prehistoric life through fossils. Fossils are described as the true witnesses of evolution or documents

Paleontology is the study of prehistoric life through fossils. Fossils are described as the true witnesses of evolution or documents

of  various  geological  strata  of evolution. Fossilization is the process  by  which  plant  and animal remains are preserved in sedimentary rocks. They fall under three main categories.

i) Actual remains – The original hard parts such as bones, teeth or shells are preserved as such in the earth’s atmosphere. This is the most common method of fossilization.When marine animals die, their hard parts such as bones, shells, etc., are covered with sediments and are protected from further deterioration. They get preserved as such as they are preserved in vast ocean; the salinity in them prevents decay. The sediments become hardened to form definite layers or strata. For example, Woolly Mammoth that lived 22 thousand years ago were  preserved  in  the  frozen coast of Siberia as such. Several human beings and animals living in the ancient city of Pompeii were preserved intact  by  volcanic ashwhich gushed out from Mount Vesuvius.

ii) Petrifaction – When animals die the original portion of their body may be replaced molecule for molecule by minerals and the original substance being lost through disintegration. This method of fossilization is called petrifaction. The principle minerals involved in this type fossilization are iron pyrites, silica,  calcium carbonate and bicarbonates of calcium and magnesium.

iii) Natural moulds and casts – Even after disintegration, the body of an animal might leave indelible impression on the soft mud  which  later  becomes  hardened  into stones. Such impressions are called moulds.The cavities of the moulds may get filled up by hard minerals and get fossilized, which are called casts. Hardened faecal matter termed as coprolites occur as tiny pellets. Analysis of the coprolites enables us to understand the nature of diet the pre-historic animals thrived on.

Visit any museum nearer to your school with your teacher and identify the bones of different animals including mammals. The famous Egmore Museum is in Chennai.

Similarities in structure between groups of organisms are accepted as indicators of relationship. For example, a comparative study of the forelimbs of different vertebrates exhibits a fundamental plan of similarity in structure. These relationships can be studied under homologous organs, analogous organs, vestigial organs, connecting links and atavistic organs.

In vertebrates, comparative anatomical studies reveal a basic plan in various structures such as fore limbs and hind limbs. Fore limbs of vertebrates exhibit anatomical similarity with each other and is made of similar bones such as humerus, radius, ulna, carpals, metacarpals and phalanges. 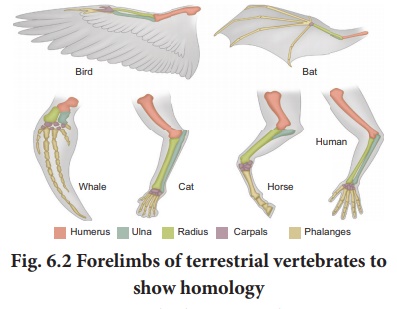 Structures which are similar in origin but perform different functions are called homologous structures that brings about divergent evolution (Fig 6.2). 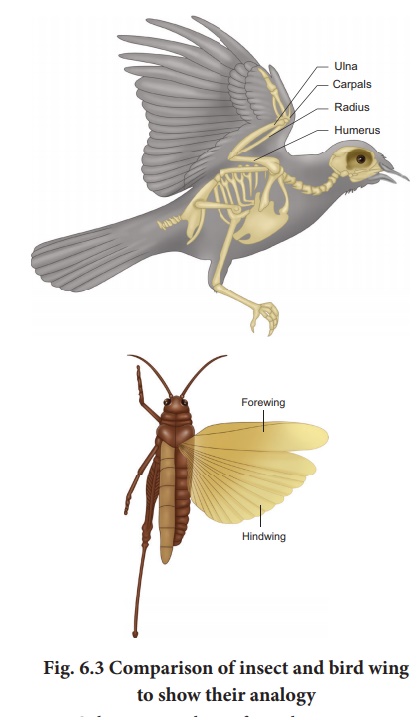 Structures that are of no use to the possessor, and are not necessary for their existence are called vestigial organs. Vestigial organs may be considered as remnants of structures which were well developed and functional in the ancestors, but disappeared in course of evolution due to their non-utilization. Human appendix is the remnant of caecum which is functional in the digestive tract of herbivorous animals like rabbit. Cellulose digestion takes place in the caecum of these animals. Due to change in the diet containing less cellulose, caecum in human became functionless and is reduced to a vermiform appendix, which is vestigial. Other examples of vestigial organs in human beings

Sudden appearance of vestigial organs in highly evolved organisms is called atavistic organs. Example, presence of tail in a human baby is an atavistic organ.

The development of heart in all vertebrates follows the same pattern of development as a pair of  tubular structures that later develop into  two chambered heart in fishes, three chambered in amphibians and in  most reptiles and four chambered in crocodiles,  birds and mammals; indicating a common ancestry for all the  vertebrates,Hence scientists in the  19th century concluded that  higher animals during their embryonic development  pass through stages of lower animals (ancestors). Ernst  Von Haeckel, propounded  the “biogenetic law or theory of recapitulation” which states that the life history of an individual (ontogeny) briefly repeats or recapitulates the evolutionary history of the race (phylogeny). In other words “Ontogeny recapitulates Phylogeny”. The embryonic stages of a higher animal resemble the adult stage of its ancestors. Appearance of pharyngeal gill slits, yolk sac and the appearance of tail in human embryos are some of the examples (Fig. 6.4). The biogenetic law is not universal and it is now thought that animals do not recapitulate the adult stage of any ancestors. The human embryo recapitulates the embryonic history and not the adult history of the organisms.

The comparative study of the embryo of different animals shows structural similarities among themselves. The embryos of fish, salamander, tortoise, chick and human start life as a single cell, the zygote, and undergo cleavage to produce the blastula, change to gastrula and are triploblastic. This indicates that all the above said animals have evolved from a common ancestor.

Molecular evolution is the process of change in the sequence composition of molecules such as DNA, RNA and proteins across generations. It uses principles of evolutionary biology and population genetics to explain patterns in the changes of molecules.

One of the most useful advancement in the development of molecular biology is proteins and other molecules that control life processes are conserved among species. A slight change that occurs over time in these conserved molecules (DNA, RNA and protein) are often called molecular clocks. Molecules that have been used to study evolution are cytochrome c (respiratory pathway) and rRNA (protein synthesis).