It occurs when one allele (or combination of alleles of differences) makes an organism more or less fit to survive and reproduce in a given environment. If an allele reduces fitness, its frequencies tend to drop from one generation to the next.

The evolutionary path of a given gene i.e., how its allele's change in frequency in the population across generation, may result from several evolutionary mechanisms acting at once. For example, one gene’s allele frequencies might be modified by both gene flow and genetic drift, for another gene, mutation may produce a new allele, that is favoured by natural selection (Fig. 6.6).

There are mainly three types of natural selection

i. Stabilising Selection (centipetal selection): This type of selection operates in a stable environment (Fig. 6.7a). The organisms with average phenotypes survive whereas the extreme individuals from both the ends are eliminated. There is no speciation but the phenotypic stability is maintained within the population over generation. For example, measurements of sparrows that survived the storm clustered around the mean, and the sparrows that failed to survive the storm clustered around the extremes of the variation showing stabilizing selection. 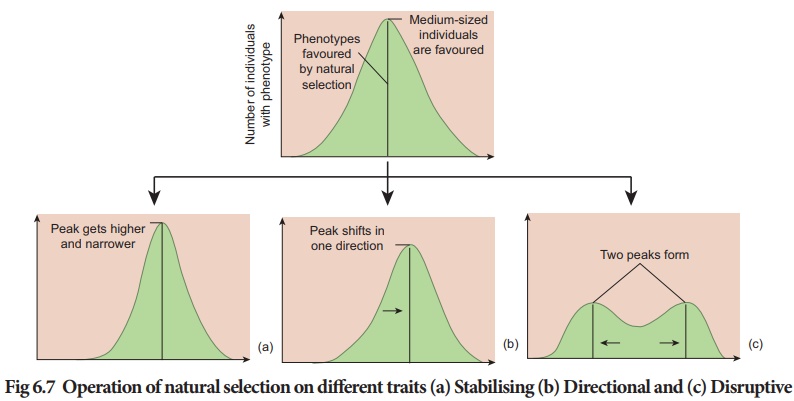 ii. Directional Selection: The environment which undergoes gradual change is subjected to directional selection (Fig. 6. 7b). This type of selection removes the individuals from one end towards the other end of phenotypic distribution. For example, size differences between male and female sparrows. Both male and female look alike externally but differ in body weight. Females show directional selection in relation to body weight.

iii. Disruptive Selection (centrifugal selection): When homogenous environment changes into heterogenous environment this type of selection is operational (Fig. 6.7c). The organisms of both the extreme phenotypes are selected whereas individuals with average phenotype are eliminated. This results in splitting of the population into sub population/species. This is a rare form of selection but leads to formation of two or more different species. It is also called adaptive radiation. E.g. Darwin's finches-beak size in relation to seed size inhabiting Galapagos islands.

Movement of genes through gametes or movement of individuals in (immigration) and out (emigration) of a population is referred to as gene flow. Organisms and gametes that enter the population may have new alleles or may bring in existing alleles but in different proportions than those already in the population. Gene flow can be a strong agent of evolution (Fig 6.8). 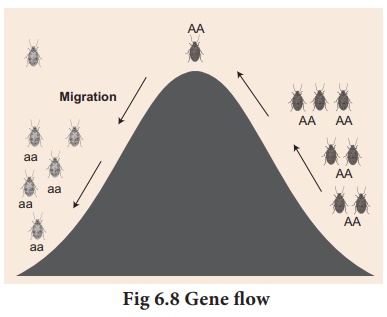 Genetic drift is a mechanism of evolution in which allele frequencies of a population change over generation due to chance (sampling error). Genetic drift occurs in all population sizes, but its effects are strong in a small population (Fig. 6.9). It may result in a loss of some alleles (including beneficial ones) and fixation of other alleles. Genetic drift can have major effects, when the population is reduced in size by natural disaster due to bottle neck effect or when a small group of population splits from the main population to form a new colony due to founder’s effect. 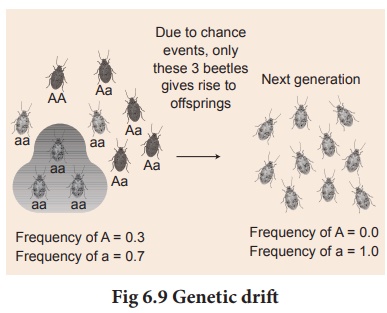 Although mutation is the original source of all genetic variation, mutation rate for most organisms is low. Hence new mutations on an allele frequencies from one generation to the next is usually not large.