The earliest known fossils come from the early Cretaceous and resemble pollen grains of living Chloranthaceae. DNA evidence suggests that a shrub, Amborella, and water-lilies diverged first in angiosperm evolution. These plants share features and it is likely that the primitive flowers were mainly small but variable in size with few but indefinite numbers of fertile parts, some hermaphrodite, other unisexual. Some had a bract. A range of large and small flowers appeared soon after.

The earliest evidence of flowering plants is fossil pollen grains and fragmentary flowers and fruits from lower Cretaceous rocks, about 110 million years old (some 130 million year old fragments may be angiosperms), suggesting that flowering plants evolved some time in the Jurassic, perhaps 150 million years ago, long after the other seed plant groups . The fossil record is always fragmentary and the conditions for preservation such that only certain plants are likely to be preserved, e.g. those living by water or acid peat.

Small or isolated plant populations, which are likely to be particularly significant in evolution  are not likely to be well preserved.

The pollen and form of the flower of the earliest fossils are similar to those of living members of the Chloranthaceae, a small family from tropical America, east Asia and New Zealand. The flowers of these plants are simple and tiny, up to 3 mm long, some genera bearing hermaphrodite flowers, others unisexual, borne in inflorescences (Fig. 1). Each flower contains one or three stamens and/or one carpel and some have a bract (small modified leaf) under them. They have no petals or sepals. Hermaphrodite species are pollinated by unspecialized insects; unisexual species by the wind. Several other living plant families are represented as fossils in slightly younger rocks, with a wide range of flower structure from large-flowered magnolias to catkin-bearing trees such as the planes. In some of these the flower structure is not rigidly set, and they have variable numbers of stamens and carpels surrounded by a perianth, i.e. modified leaves or bracts not clearly sepals or petals. 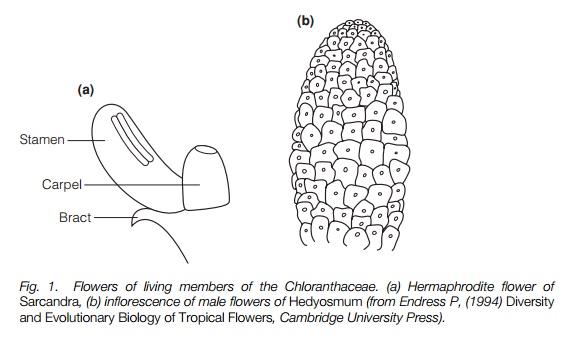 Over the last few years, DNA from genes in the nucleus, plasmids and mitochondria of many angiosperms has been analyzed. Putting all the molecular evidence together it appears that a shrub, Amborella, from New Caledonia that bears unisexual flowers, and the water-lilies, which are herbaceous aquatics bearing large hermaphrodite flowers, diverged from the other angiosperms earlier than any other group. Both of these have numerous stamens and an indefinite number of perianth segments. The Chloranthaceae and its relatives are, on this evidence, closer to other families.

Whatever the most primitive plant is, it is likely that the earliest flowers had certain features since these are shared by all the plants mentioned above and are consistent with the fossil record. There was a variable number of stamens and carpels, each separate and inserted above the perianth where this was present. Unisexual and hermaphrodite forms appeared early, and some had a perianth or bracts underneath the fertile parts but no well-defined petals or sepals. They are likely to have been visited and pollinated by unspecialized beetles, flies and wasps, though wind-pollination probably arose early on. They were small shrubs and perhaps herbs among dominant gymnosperms.