A few plants are specialized to one or a few pollinator species. The orchids may attract just one species of bee and figs can only be visited by one group of wasps with which they have a close interdependent relationship. Generalization in pollination is much more common.

A few flowers show extremes of specialization in their pollination. In manyorchids, each flower needs a single visit for the successful pollination of hundreds of seeds, so they can become highly selective in the species that they use. Some tropical species have a long spur growing out of the back of the flower with nectar at its base, which only moths with extremely long thin tongues can reach. The European bee orchid group, and a few other groups of orchids in other parts of the world, have flowers that resemble the female bee, both in looks and in scent, each orchid species resembling a different bee; they are visited and successfully pollinated by the males of that bee species.

The figs, a large and important group of tropical trees and ‘stranglers’  have flowers in an inverted inflorescence with flowers opening into a central cavity, surrounded by a solid mass (Fig. 4). The inflorescences can only be penetrated by small wasps through a hole at the tip. The wasps lay their eggs, grow and mate in the inflorescences before collecting pollen and dispersing to another fig. Plant and wasp are totally interdependent. There is a similar interdependence between yuccas and moths, but otherwise such specialization is rare. 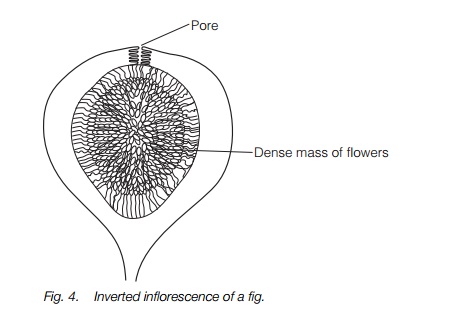 More generalist flowers are much more common than the specialists, particularly among the dominant vegetation, which are usually pollinated either by wind or by a range of insects and sometimes birds as well. Pollinating insects (and other animals) can vary manyfold in numbers from year to year and place to place, so specialization to one or a few species can be risky.