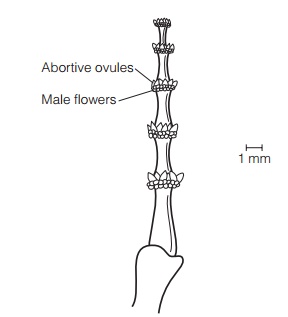 Two genera of trees shrubs and climbers, Gnetum, Ephedra and the unique desert plant Welwitschia make up the group. They have vessel-like xylem cells and phloem resembling that of angiosperms.

Two genera of trees shrubs and climbers, Gnetum, Ephedra and the unique desert plant Welwitschia make up the group. They have vessel-like xylem cells and phloem resembling that of angiosperms.

They are dioecious or monoecious and the sporangia are borne in pairs or whorls. Pollen grains have two to five cells and produce two nonflagellate sperms when they reach the pollination drop. This drop may attract insects for pollination. Two eggs are fertilized, paralleling the double fertilization in angiosperms, although one embryo aborts.

The Gnetales comprise three rather disparate genera, Gnetum, Ephedra and Welwitschia. Gnetum comprises about 40 species of climbers and small trees in tropical rainforests of South America, Africa and south-east Asia. They closely resemble angiosperms except in their reproductive structures, and their leaves are almost identical to those of a dicotyledonous angiosperm. One species is cultivated for its edible seeds in Asia. Ephedra has 40 species of much-branched shrubs, with a few small trees and climbers, in arid warm temperate parts of Eurasia, north Africa and North and South America. They have photosynthetic stems with whorls of scale leaves. Ephedra provides the important drug ephedrin. Welwitschia has a single extraordinary species confined to the deserts of south-western Africa. It is unlike any other plant in that it produces a woody central crown at the top of a mainly underground stem, from which two leaves grow continuously, fraying at the ends and splitting. In mature plants, which can live for more than 1000 years, these can reach 3 m or more long and 1 m wide.

The Gnetales, unlike any other seed plants except angiosperms, have xylem with cells with such large pits that they can be described as vessels, and phloem with cells associated with sieve elements resembling companion cells. On morphological grounds they have been considered to be closely related to the angiosperms, but molecular studies suggest that they are closer to conifers and other gymnosperms and that the similarities in anatomy have arisen independently. 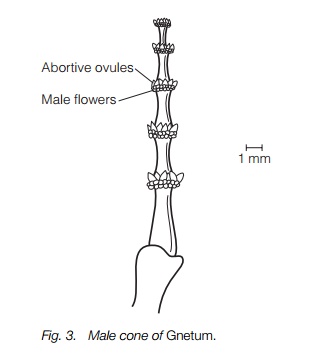 The pollen grains contain two (Welwitschia), three (Gnetum) or five cells (Ephedra) of the male gametophyte by the time they are shed. The female gametophyte has a free nuclear stage as in other gymnosperms. In Ephedra, two archegonia are formed with many neck cells, but these are not differentiated in Gnetum or Welwitschia. The ovules, including sterile ones in the male cones, secrete a sugary pollination drop by the micropyle attractive to insects and the pollen is dispersed by insects or wind, to be caught in this fluid. There the pollen grains burst and one of the cells divides into two non-motile sperms to fertilize the egg. By the time the pollen reaches the egg in Ephedra (and

perhaps others) the egg has also divided and each sperm fertilizes an egg, but one of the eggs aborts. The interval between pollination and fertilization is only about 1 day, in marked contrast to cycads and ginkgo. The double fertilization of Gnetales has parallels with that in angiosperms and may suggest how that originiated (Topics D2 and R4).

In the developing embryo, only Ephedra has free nuclear divisions, the othertwo genera developing cells immediately. Many embryos may be formed initially but only one with two cotyledons is present in the ripe seed. Mature seeds may have a fleshy integument or surrounding bracts or develop wings for dispersal by wind.