Male reproductive structures: Anthers are borne in pairs on the underside of scales forming male cones. The pollen grains usually have air bladders mainly involved with orientation at the micropyle for fertilization. All are wind-pollinated and pollen is produced in enormous quantities. In most conifers, the male gametophyte consists of four cells contained within the pollen grain. Female reproductive structures: Ovules (megasporangia) are borne on ovule scales in female cones, except for yews that bear seeds individually. The female gametophyte initially has a free nuclear stage before forming cells and archegonia. A drop of fluid is secreted by the micropyle to trap pollen when it is mature.

The microsporangia, or anthers, are borne on the underside of specialized fertile leaves in short strobili (cones) (Fig. 1). These leaves often have expanded tips to which the anthers are attached. There are two anthers per fertile leaf in many conifers but in some there are more. The cones themselves are produced in the axils of scale-leaves in pines, or at the tips of lateral shoots in other families. 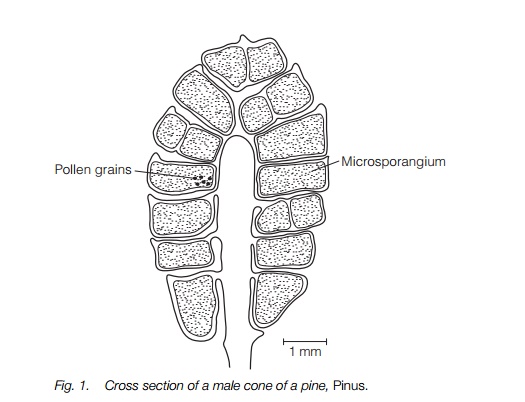 The anthers have a thin wall, of one or a few cell layers. The outer cells have uneven thickening, in rings or a reticulate pattern, which are involved in dehiscence. They take about a year to develop to maturity and to release the pollen. The pollen grains resemble those of flowering plants except that pines and some other conifers have characteristic air bladders formed from an extension of the outer pollen wall giving a most distinctive appearance (Fig. 2). These bladders may aid with wind dispersal but are mainly involved with the orientation of the pollen as it fertilizes the ovules. All conifers are wind-pollinated and pollen can be produced in enormous quantities, frequently coming off in visible clouds when the cones are mature. By lakes they can form yellowish lines in the water or ‘tide-lines’ as the water recedes. 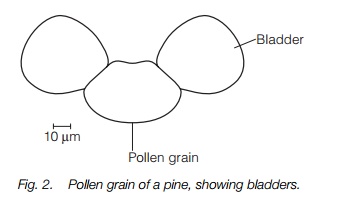 The male gametophyte is much reduced and formed within the outer wall of the pollen grain. The largest male gametophytes are found in Agathis, the southern hemisphere white pines of the Araucariaceae family that have a male prothallus with up to 40 cells. In pines there are four cells by the time the pollen is shed, two vegetative prothallus cells, the pollen tube nucleus and the generative cell. The generative cell gives rise to a sterile cell and two unequal sized sperm cells (after another division). In the cypresses there are no vegetative cells at all, only the generative cell and tube nucleus. In all conifers the sperms have no flagellum and are not motile.

The female reproductive branch is the familiar pine or fir cone (Fig. 3). It has two ovules attached to each fertile scale leaf, but the cone differs markedly from the male in that each fertile scale has a bract underneath it, in some partially fused with the ovule scale. This, and evidence from fossil conifers, suggests that the cone is a compound structure with each fertile scale derived from a whole shoot. The cone can take 2 years to mature. A few conifers, notably the yew and its relatives, Taxaceae, do not have cones and the ovule is solitary, borne at the tip of a minute shoot in the leaf axils.

The megasporangium  has a single integument, and four megaspores are produced, though only one is functional. The megaspore starts to divide to produce the megagametophyte at an early stage, and in northern species there is usually a dormant period in the first winter. Eventually many free nuclei are produced and cell walls form once there are around 2000 nuclei. Between one and six archegonia are produced next to the micropyle  and, in these, the egg is surrounded by neck cells and a canal cell as in other vascular plants and bryophytes . 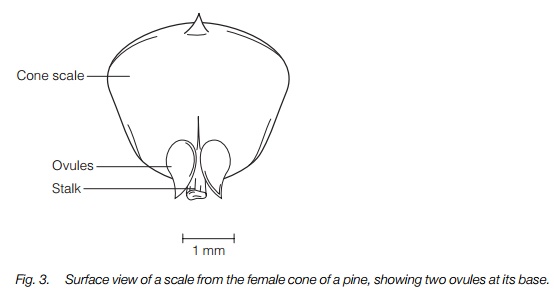 Fertilization and the seed

Once a pollen grain has reached the micropyle, the two male gametes are formed and the pollen tube grows actively through the nucellus to reach the archegonia. The male gametes are discharged into the egg along with the tube nucleus and the sterile nucleus. Fertilization is achieved by the fusion of the larger of the male gametes with the egg nucleus, the other three male nuclei degenerating.

If more than one archegonium has been fertilized several embryos may be formed, and each fertilized egg may divide to form several embryos, so competition can occur. Eventually, one embryo outcompetes the others and absorbs the nutrients from the female gametophyte, filling the seed when it is mature.The embryo has several cotyledons (the food stores and first leaves;). In most conifers the seeds are released when the cone scales separate at maturity. The seeds may be nutritious and can be a major food for some birds, such as crossbills, and small mammals. Some species have a resistant integument that allows the seed to lie dormant, and a few only germinate after a fire has passed over them. The yew has a fleshy outgrowth from the integument which is attractive to birds.

In comparison with most flowering plants the stages of reproduction are slow, taking about a year from female cones being receptive to the mature seed, but in pines fertilization does not occur until a year after the female cones become receptive and the cycle takes 2 years.