Early evolution: The sepals derive from a whorl of leaves around the fertile parts. Some petals derived from sterile stamens, others from a second whorl of sepals. There were two main lines of evolution, one to large flowers and specialist insect pollination, mainly by beetles, the other to small flowers in inflorescences pollinated by wind. Subsequent developments led to smaller flowers with floral parts in fives or threes. Later evolution: In the late Cretaceous/early Tertiary period, flowering plants radiated to dominate the world, in conjunction with specialist flower-feeding insects. Innovations included fused petals, carpels inserted below the petals and bilateral symmetry. Some had inflorescences. Wind-pollination evolved many times. Most modern plant families appeared.

Adaptive radiation of flowering plants, i.e. their spread and diversification, occurred through the Cretaceous period in parallel with other seed plant groups and some living families appeared. Outer whorls of the flower became differentiated early on, the outermost layer, referred to as sepals even if there is onlyone whorl, probably evolving from bracts. When there are two different whorls, the inner whorl is referred to as the petals, but some probably evolved from a second whorl of sepals, others from stamens losing their anthers and becoming organs purely for attracting insects. Some water lilies have intermediate organs, stamens with flattened colored filaments, between the fertile stamens and larger entirely sterile petals. Cultivated ‘double’ flowers such as roses have some stamens replaced by petals . One main early line of evolution was towards a fixed number in each whorl, often five in the dicots and three in the monocots, making the flowers radially symmetrical (actinomorphic).

There was specialization for pollination, by beetles along one line of evolution including the magnolias, and by wind along another leading to the catkin-bearing trees. The insect-pollinated group had hermaphrodite flowers of, at first, increasing size and complexity, though later insect-pollinated flowers are smaller. By the end of the Cretaceous period, many families with actinomorphic insectpollinated flowers had appeared, such as buttercups, pinks and heathers. The wind-pollinated group retained small unisexual flowers, with few parts borne in inflorescences, usually with male and female on the same plant. This monoeciousbreeding system  includes less than 5% of living species but several of these are dominants such as the oaks and beeches, birches, hazels and planes.

At the end of the Cretaceous and beginning of the Tertiary period, between 75 and 50 million years ago, there was a second and much larger adaptive radiation which saw the increasing dominance of the angiosperms and the appearance of the majority of modern plant families. This was closely associated with the adaptive radiation of specialist insect pollinators and leaf feeders, the butterflies and moths, long-tongued flies and bees. Innovations included the fusion of the lower part of the petals and/or the sepals into a tube and the fusion of the carpels. Bilaterally symmetrical, or zygomorphic, flowers appeared, usually facing sideways rather than upwards and with the lower petal(s) forming a lip as a landing platform for insects. Some flowers such as members of the thyme family have fused petals and zygomorphic flowers (Fig. 2). These were adaptations for specialist insect pollination and at least in part serve to exclude other visitors. Adaptations for pollination by birds or bats appeared later, mainly derived from specialist insect-pollinated flowers. The main trends are outlined in Table 1. 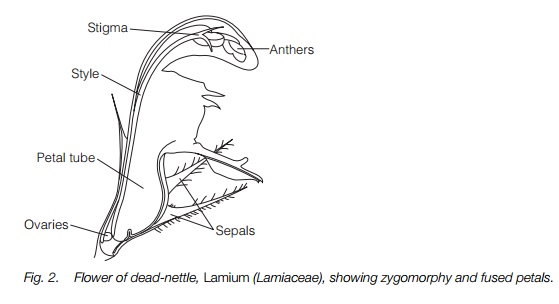 Aggregation of flowers into inflorescences is an adaptive trend in many plant families. It is taken to extreme specialization in the daisy family in which there are often two different forms of flower in each inflorescence, the whole aggregation, sometimes of more than 100 flowers, resembling a single flower (Fig. 3). 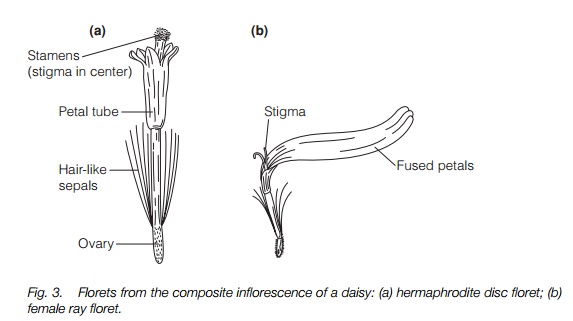