The Retina - Visual Pathway of the Brain 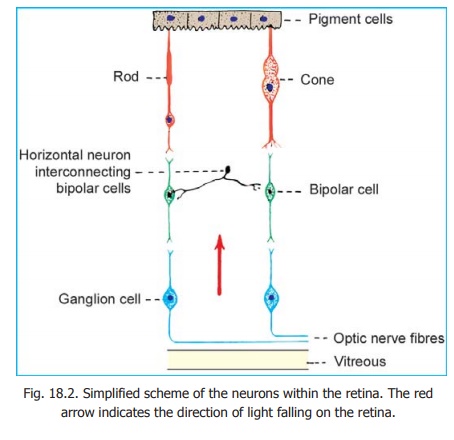 The retina has a complex structure. It contains photoreceptors that convert the stimulus of light into nervous impulses. These receptors are of two kinds, rods and cones.

The retina has a complex structure. It contains photoreceptors that convert the stimulus of light into nervous impulses. These receptors are of two kinds, rods and cones (Fig. 18.2). There are about seven million cones in each retina. The rods are far more numerous, and number more than 100 million.

The cones respond best to bright light. They are responsible for sharp vision and for discrimination of colour. They are most numerous in the central region of the retina which is responsible for sharp vision. This area is about 6mm in diameter. Within this region there is a yellowish area called the macula lutea. The centre of the macula shows a small depression called the fovea centralis.

The macula lies exactly in the optical axis of the eyeball. When any object is viewed critically its image is formed on the macula. The fovea centralis is believed to contain cones only. Rods, on the other hand, predominate in peripheral parts of the retina. They can respond to poor light and specially to movement across the field of vision. 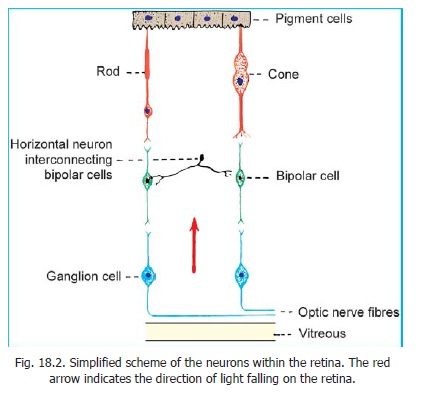 cones are like those of neurons. They end by synapsing with other neurons within the retina. For details of the structure of rods and cones, see the author’s HUMAN HISTOLOGY.

The various elements mentioned above form a series of layers within the retina. The outermost layer (towards the choroid) is formed by the pigments cells, followed in sequence by the rods and cones, the bipolar cells, the ganglion cells, and a layer of optic nerve fibres. The layer of optic nerve fibres is apposed to the vitreous. It will be obvious that light has to pass through several of the layers of the retina to reach the rods and cones. This ‘inverted’ arrangement of the retina is necessary as passage of light in the reverse direction would be obstructed by the layer of pigment cells.

The pigment cells are important in spacing the rods and cones and in providing them with mechanical support. They absorb light and prevent back reflection. A nutritive and phagocytic role has also been attributed to them.

At this stage it must be emphasised that the structure of the retina is very much more complex than the highly simplified description above would suggest. Some points worthy of note are as follows.

1.                 Rods and cones are of various types. Intermediate forms between them are also present. The rods and cones have a complicated ultrastructure. Their outer segments contain photopigments which appear to be concerned in converting the stimulus of light into a nervous impulse.

3.                 The vertically orientated elements of the retina (i.e., rods and cones, bipolar cells, ganglion cells) are interconnected by horizontally disposed neurons. Some of these appear to be devoid of axons and are called amacrine cells.

5.                 According to some authorities, the retina receives some fibres through the optic nerve although their source is uncertain. Other authorities however, deny the presence of such fibres.

6.                 Besides the nervous elements, the retina contains supporting cells which are believed to represent a specialised type of neuroglia.