Reflexes related to the Eyeball: Pupillary and Corneal Reflex 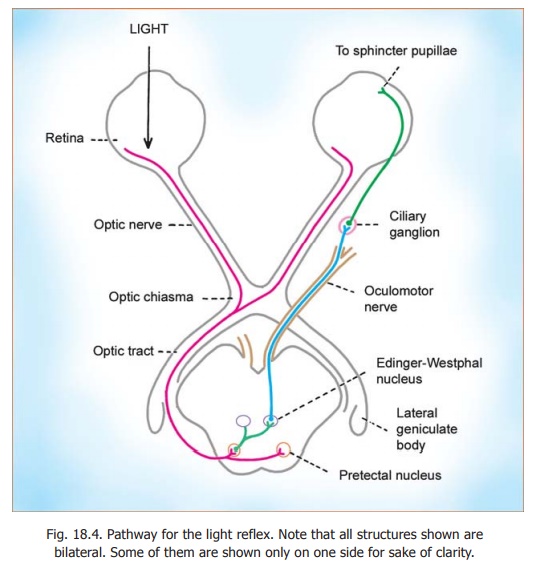 Light thrown on an eye causes the pupil of that eye to contract. This is called the direct pupillary light reflex.

Reflexes related to the Eyeball

Light thrown on an eye causes the pupil of that eye to contract. This is called the direct pupillary light reflex. At the same time the pupil of the other eye also contracts. This is called the consensual light reflex. The pathway for the light reflex is shown in Fig. 18.4. Impulses from the retina (of theeye on which light is thrown) travel through the optic nerve, chiasma and optic tracts. Near the lateral geniculate body the fibres concerned pass into the midbrain and end in the pretectal nucleus. Axons arising from this nucleus reach the Edinger Westphal nuclei of both sides. Fibres arising in these nuclei supply the sphincter pupillae after relay in the ciliary ganglion. The consensual reflex may be explained by the following.

3.                 Fibres from each pretectal nucleus reach the Edinger Westphal nuclei of both sides. Constriction of the pupil also takes place when we look at a near object i.e., during accommodation.

The pathway for this accommodation reflex is different from that for the light reflex, and is believed to involve the visual cortex. In certain diseases (notably syphlitic infection) of the nervous system the pupillary light reflex may be abolished, but pupillary constriction in response to accommodation remains. This condition is called Argyll-Robertson-pupil. In such cases the lesion is believed to be in the pretectal area.

If the cornea is touched with a small wisp of cotton this results in closing of both eyes. This is called the corneal reflex. Impulses from the cornea travel along branches of the ophthalmic division of the trigeminal nerve to the sensory nuclei of this nerve. Secondary fibres establish connections with the motor nuclei of the facial nerve of both sides. Fibres arising in the facial nuclei, and reaching the muscles closing the palpebral aperture, complete the reflex arc. In the case of injury to the ophthalmic division of the trigeminal nerve, the corneal reflex cannot be elicited from that side, but a bilateral response is obtained by stimulating the cornea of the normal side. In facial paralysis the response is seen only on the normal side. 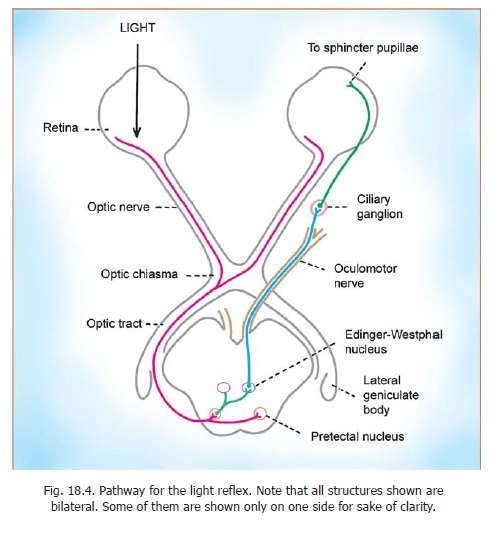