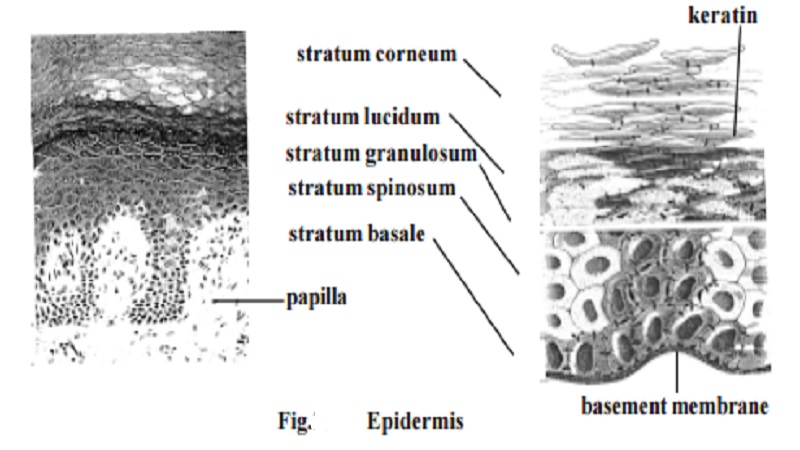 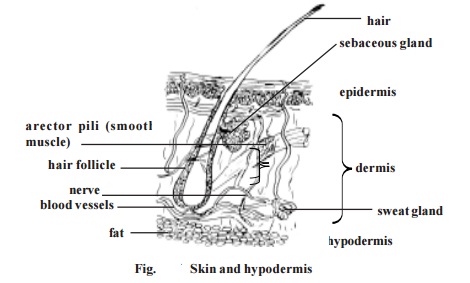 The skin or integument rests on layers of cells called hypodermis. The hypodermis attaches the skin to underlying bones and muscles. It supplies blood vessels and nerves to the skin.

The skin is composed of two major tissues, namely dermis and epidermis. The dermis is mostly formed of connective tissue having fibro-blasts, adipose cells and macrophages. It provides the structural strength to the skin. The dermis accommodates nerve endings, hair follicles, smooth muscles and glands.

Epidermis :- The epidermis is made up of stratified squamous epithelium. It is separated from the dermis by a basement membrane. It contains mel- anocytes giving colour to the skin. Many of the cells of the epidermis produce a protein substance called keratin. Hence they are called as keratinocytes.

The deepest layers of the epidermis produce nerve cells by mitosis. As new cells are formed, the older cells are pushed to the surface. The sur-face cells will protect the inner new cells. Gradually the shape and chemical nature of the surface cells will get altered. Slowly they get filled with keratin. This process is called keratinization. During this process the epidermis gets divided into five distinct regions or strata. They are the stratum basale, stra-tum spinosum, stratum granulosum, stratum lucidum and stratum corneum.

Stratum basale is in the deeper region of the epidermis. It consists of one layer of columnar cells. Keratinization of cells begins in this region. Above this layer stratum spinosum is seen. It has 8-10 layers of polygonal cells. The stratum granulosum is the next upper layer. It has 3-5 layers of flat-tened cells. Above this layer stratum lucidum occurs. It is a thin zone having several layers of dead cells. The top most layer is called the stratum cor-neum. It consists of more than 20 layers of dead cells. These cells get filled with keratin. They are said to be cornified. The cornified cells are surrounded by a hard protective envelope.

The skin can be either thick or thin. All five epithelial layers are seen in the thick skin. However stratum corneum contains more number of cells.Thick skin is formed in the soles of the feet, the palms of hands and tips of fingers. The general body surface has thin skin. In the thin skin each epithe-lial layer inturn has few layers of cells. There are only one or two layers of cells in stratum granulosum.

Callus :- The regions of skin subjected to constant friction or pressure are thickened to form the callus. The callus has several layers of cells in the stratum corneum.

Skin colour :- The colour of the skin is due to pigments in the skin. The thickness of the stratum corneum and blood circulation can also cause skin colour. Normally the colour is caused by the pigment melanin. It provides colour to skin, hair and eye. It protects the body from sun's ultraviolet rays. Melanin is produced by melanocytes. Melanin production is genetically deter-mined. However, hormones and exposure to light can also alter the colour.

Hair :- The hairs are integumentary structures. A hair has a root and a shaft. While the shaft projects above the skin, the root remains well below the sur-face. The base of the root has a hair bulb. It is an expanded region. The shaft and most of the root of the hair are formed of dead keratinized epithelial cells. These are arranged in three concentric layers called the medulla, the cortex and the cuticle. The central axis of the hair is formed of the medulla. Major part of the hair is formed of a single layer of cells. 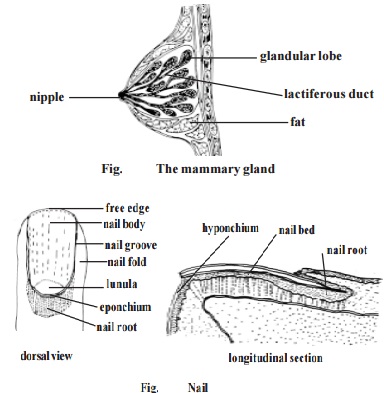 According to the amount and types of melanin, the hair colour may vary. The colour of the hair is genetically determined. During old age the amount of melanin decreases causing white hair. Grey hair has a mixture of faded, unfaded and white hairs.

The hair growth is due to addition of cells at the base of the hair root. The growth stops at specific stages. After a resting period, new hair replaces old hair. The hairs on the head grow for a period of three years and rest for 1-2 years.

The muscle cells found associated with hair follicles are called the arrector pili. Contraction of these muscles cause 'goose flesh' making the hairs to 'stand on end'.

The most common type of sweat gland on the skin are the merocrine glands. They are simple coiled tubular glands. They open directly on to theskin through sweat pores. The gland has two parts. They are the deep coiled portion and the duct which passes to the surface of the skin. The number of sweat glands are more in the palms of the hands and soles of the feet.