The Genetics and Evolution of Behavior

Darwin firmly believed that all of his claims about natural selection applied both to organisms’ structural traits (like a finch’s bill width, or a fish’s coloration) and to its behavior traits (like being a protective parent or a skilled problem solver).

THE GENETICS AND EVOLUTION  OF BEHAVIOR

Darwin firmly believed that all of his claims about natural selection applied both to organisms’ structural traits (like a finch’s bill width, or a fish’s coloration) and to its behavior traits (like being a protective parent or a skilled problem solver). Indeed, the evolutionary logic is the same whether we’re considering an animal’s anatomy or its behaviors, capacities, and preferences. For behaviors just as for physical traits, evolu-tion requires the same three conditions: variation among individuals; a higher rate of reproductive success for individuals with some of the variations; and some means of passing the successful variation from one generation to the next. If this selection process continues generation after generation, eventually the advantageous traits or behaviors will characterize the entire species.

But how does evolution shape behaviors, or capacities, or preferences? We’ve suggested the answer in some of our earlier examples: Psychological traits, just like physical features, are part of an animal’s phenotype. If this phenotype makes it more likely that the animal will survive and reproduce, then the animal’s genes will be well represented in the next genera-tion. And to the extent that an animal’s behaviors, capacities, and preferences are shaped by those genes, then these traits also are likely to be well represented in the next generation.

Of course, the genotype does not produce these traits directly. Instead, the genes (as always) guide the production of proteins, which in turn, lead to the construction of a nervous system with a specific design. It’s then the nervous system, modulated by other signaling systems (e.g., hormones) and various environmental influences, that makes the behaviors (or capacities or preferences) more likely.

In fact, many behaviors in many organisms have been shaped in exactly this way— and this point leads us to another common misunderstanding about evolution: Some people have the idea that natural selection would lead to rigidly defined behaviors— favoring organisms that always produce the same (presumably adaptive) responses to a predator, or to a mate, or to their young. If we observe flexibility in a response, there-fore, or if we see that a behavior is shaped by learning, we conclude that the behavior depends on the organism’s experience, not evolution.

Once again, though, this view is mistaken. To be sure, evolution has in many cases guided an organism (human or otherwise) toward relatively well-defined behaviors, like a particular courtship dance or a specific style of nest building repeated season after season (Figure 2.15). Even in these cases, though, evolution has favored mechanisms that produce flexibility in how an animal acts. 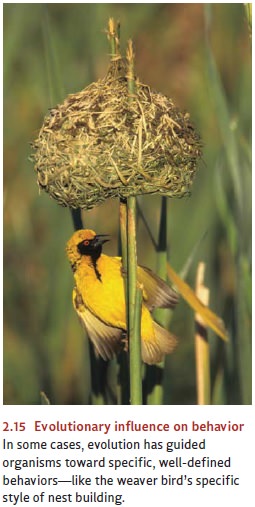 To understand this point, bear in mind that virtually all species evolved in changing environments. In some cases, the organism encountered changes from one day to the next, so that the berry bush that was filled with fruit yesterday is empty today; the pred-ator that lurked by the water hole just a day ago has now moved to other hunting grounds. In other cases, the changes were slower paced—climatic conditions might vary from one year to the next, and food supplies that were available in some seasons might disappear in others. In any of these settings, animals that always behaved in the same manner would fare poorly. As a result, natural selection would favor individuals that could shift their behavior in response to new circumstances and that could rapidly deploy new skills appropriate for an altered setting.

This need for flexibility in an animal’s behavior is amplified by the process of nicheconstruction—a process in which organisms, through their behaviors, alter their environ-ments and thus create their own circumstances. In biology, a niche refers to all of the factors in an organism’s environment that have the potential to affect its life. Animals can and do alter these factors; and by doing so, they alter the opportunities and challenges they face.

These considerations are especially important for humans, because our ancestors were quite skilled in niche construction—building new shelters, finding (or develop-ing) new sources of food, and creating social alliances that favored individuals with communication skills. Because of changes like these, ancient humans would have had a substantial survival advantage if they were flexible in their behavior, responsive to new cues in the environment, and able to share information with others. Thus, natural selection would, in many cases, have favored innovators, learners, and probably teachers (Csibra & Gergely, 2009; Tomasello, 2000).

Evolution therefore favors flexibility and learning—in part because environments inevitably vary, and in part because organisms end up changing their environment and need to cope with those changes. But can we be more specific about the origins of particular human behaviors? As we’ll see throughout this text, we can often draw important lessons from considerations of the proximate causes of a behavior, with an emphasis on genetics; just as often, we can draw insights by asking about ultimate causes, with an emphasis on evolu-tion. Let’s develop these points by considering three extended examples.

The first case we’ll consider involves the expression of emotions—and smiles in par-ticular. Here we’ll see what can be learned by comparisons across cultures and species. The second case involves intelligence and illustrates how research can illumi-nate the proximate causes of a complex capacity. Our third case involves a topic that’s central to natural selection—sexual reproduction. How do we choose our part-ners? Why do we choose to be loyal to our partner (or not)? Research in the last few decades has made it clear that an evolutionary perspective on these questions can be enormously useful.