Darwin’s deeply important conception boils down to three principles. First, there must be variation among the individuals within a population. Second, certain of the variants must survive and reproduce at higher rates than others. Third, the traits associated with this superior survival and reproduction must be passed from parents to offspring.

There are, to be sure, many variations between individuals that do not meet these conditions. As we’ve discussed, not all variations contribute to survival; nor are all of the traits in parents passed on to their young. But when these three conditions are met, Darwin argued, the composition of a population will necessarily change from one gen-eration to the next. And if this process continues for many generations, the population will evolve.

These basic ideas seem so straightforward that one of Darwin’s colleagues, Thomas Henry Huxley, reported feeling “extremely stupid not to have thought of that” on his own. Perhaps Huxley should have been easier on himself, though, because Darwin needed to get past two substantial obstacles in his thinking: He didn’t know why organisms within in a population differed from each other, and he also didn’t know how traits could be transmitted from one generation to the next. Of course, he did know that both of these conditions were often met: Plant and animal breeders had been developing new varieties for years—selectively breeding the biggest, healthiest cows in the herd to produce the best possible offspring; carefully crossing different varieties of corn to obtain a new hybrid with certain desirable qualities. But what was the mechanism? Why were some cows bigger than others, and why were some traits—but by no means all—passed from one generation of corn plants to the next?

The answers to these questions, we now know, hinge in large part on the organism’s genome. Of course, individuals differ in their phenotypes for many reasons (different experiences, different exposure to nutrients, and more), but another reason for these differences is variation in the genotype. And it’s differences in genotype that are trans-mitted from one generation to the next.

In thinking about these issues, let’s keep in mind that all the individuals in a species actually have enormously similar genomes. Indeed, this genome is a large part of what defines the species, and it’s why members of the species all have roughly the sameanatomy and physiology. But against this backdrop of uniformity, individuals do vary in their genotype; and we’ve already noted one of the reasons—the random element that’s involved in sexual reproduction. Thanks to this random element, each individual inherits a new combination of alleles, inevitably introducing some variation into the population.

Another reason for variations in genotype involves the process of reproducing chro-mosomes. This process is usually accurate, but it isn’t perfect, and sometimes mutations occur—errors in replicating the DNA—so that the chromosomes in the father’s sperm or the mother’s egg are not exact copies of the chromosomes governing the father’s biol-ogy or the mother’s. Mutations can happen randomly, and most mutations either have no effect or harm the organism. But some mutations do confer an advantage for survival and reproduction—and, in all cases, mutations contribute to the genetic diversity within a species, which in turn contributes to the phenotypic diversity that is the raw material for natural selection.

Clearly, then, our knowledge of genetics fills in some gaps in Darwin’s account— helping us to understand both the variations within a population and how these vari-ations can be transmitted to the next generation. This emphasis on genes also allows us to address a common misunderstanding of how evolution proceeds: Evolution is often described as “survival of the fittest,” but this phrase is actually misleading because survival itself is not all that evolution is about. Personal survival does matter, of course, but only insofar as it enables the organism to reproduce and pass along its genes to the next generation.

To see the importance of this emphasis on genes, consider a behav-ior observed in many birds, such as the piping plover: When a preda-tor approaches the plover’s nest, the mother bird flies a short distance away from her young, lands, and hops around, dragging one wing in a way that suggests she’s injured and unable to escape (Figure 2.10). The predator spots this (seemingly) easy target and turns away from the young, pursuing the apparently injured mother instead. In this way, the mother can lead the predator away from her chicks; then, once her brood is safe, she reveals that in fact she is perfectly healthy and flies swiftly away. 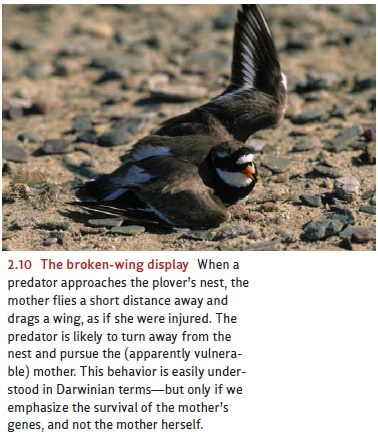 This behavior protects the bird’s young but puts the mother plover at substantial risk. When feigning injury, she’s highly vulnerable to the approaching predator; she would surely be safer if she immediately flew to safety. Still, the evolution-ary basis for this behavior is easy to understand: The mother herself would survive if she immediately flew to safety, but in that case the predator would probably eat her chicks. As a result, the mother bird would have fewer offspring to whom she has passed her genes. Let’s also assume that the plovers’ genome helps to shape her maternal behav-ior—and, in particular, plays a role in determining whether the mother plover puts her-self at risk to protect her brood, or abandons the nest to save her own skin. We can now see that if an individual plover happens to have genes favoring a self-protective response, she’s more likely to survive, but less likely to contribute copies of those genes to future generations. As a result, any genes promoting self-protection would become less common in the population. Natural selection would therefore end up favoring the protective mother—or, more accurately, would favor the genes that help shape this pro-tective behavior—and so this behavior would become the dominant pattern in the population.

A similar argument applies to cases in which an organism protects individuals that are not its offspring. For example, if a Belding’s ground squirrel sees a predator, it gives a cry of alarm. The cry warns other ground squirrels so that they can scurry to safety. But, by sounding the alarm, the first ground squirrel gives away its location and so puts itself in danger. If we focus on individual survival, therefore, this behavior makes no evolutionary sense. Once again, though, we need to think in terms of the genes’ survival, not the individual’s. The other squirrels protected by the alarm call share many of the first ground squirrel’s genes, and so by protecting these other individuals, the squirrel protects its genes—including the genes that promoted this helpful behavior. The genes that favor this behavior will then be more likely to be passed along to the next generation—and the genes, as always, are what evolution is about.