Each of us—as a human, or as a specific individual—is significantly shaped by our genetic pattern.

Each of us—as a human, or as a specific individual—is significantly shaped by our genetic pattern. That pattern, in turn, is inherited from our parents—half from our fathers and half from our mothers. But where did their genetic pattern come from? More broadly, why is the human genome as it is? Questions like these shift our focus from proximate causes, the mechanisms, within the organism’s lifetime that led its pheno-type, to ultimate causes, the reasons why, over many years of evolution, a particular trait or behavior would have helped members of a population to survive and reproduce.

Much of what we know about evolution grows out of the pioneering work of Charles Darwin. Charles Darwin (1809–1882; Figure 2.8) was an English naturalist who, from an early age, was so engrossed in outdoor pursuits that he habitually neglected his schoolwork. “To my deep mortification,” Darwin later recalled, “my father once said to me, ‘You care for nothing but shooting, dogs, and rat-catching, and you will be a disgrace to yourself and all your family.’” 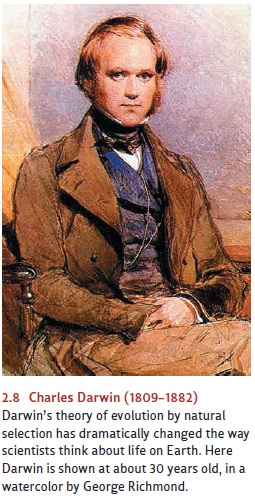 Darwin’s father, Robert, tried sending Charles to the University of Edinburgh for medical school (Desmond & Moore, 1991). Robert was a graduate himself, as was his own father. Charles, however, was bored by the lectures and horrified by the violence and gore of surgery, which in those days was performed without anesthesia.

Robert next sent Charles to Christ’s College, Cambridge, to study for a career as a clergyman. There, Charles discovered a new hobby: beetle collecting. It seemed, yet again, that his father’s worst fears were being realized. But Charles had by then become a promising student of natural history. He sufficiently impressed his botany instructor, John Steven Henslow, that Henslow recommended him for the position of captain’s companion on a voyage to South America aboard the HMS Beagle, a ship sur-veying the coast of South America for the British Royal Navy. Against his better judg-ment, Robert let Charles go. On that voyage Darwin made observations that led, in 1859, to his publication of an extraordinary and world-changing book, On the Originof Species.

Across the 19th century, it had become clear to scientists that the creatures populating the planet were markedly different from those that had been around in earlier epochs; the fossil record told them this. But what had produced the change? Darwin’s thinking about this issue was shaped by the diversity of creatures he observed during the Beagle’s voyage—and, in particular, the diversity of creatures he saw on the Galápagos Islands, off the coast of Ecuador. There he noticed, for example, that the local finches varied consider-ably in the sizes and shapes of their beaks.

In reflecting on the finches, Darwin began to develop the first of his great ideas: the descent of all life from a common origin. He hypothesized that all of the finch species on the islands were descendants of a single type of finch that had colonized the islands long ago. This led him to consider a broader notion—that all life on Earth had a shared origin, so that all creatures had descended from an ancient common ancestor. In this view, modern species had emerged—through some process of modification—from this shared ancestor. But how did this modification take place?

The answer to this question—the notion of evolution through natural selection— was Darwin’s second great idea, but it didn’t occur to him until years later, when he read the works of the English economist Thomas Malthus (1776–1834). Malthus noted that living things reproduce rapidly enough so that populations are always growing—and, crucially, growing more rapidly than the food supply is. As a result, shortages of resources are inevitable; the consequence is that some individuals will survive, but others will not. That, for Darwin, was the key.

Which individuals would do well in this competition for resources, and which would do poorly? Darwin realized that the answer was linked to his observations of how individuals in a species differed from each other. A finch with a wide bill might be better able to crack open seeds than its narrow-billed fellow, and so a wide-billed finch would have an advantage in the competition for food. This advantage wouldn’t matter when food was plentiful, but it would be crucial when—as Malthus had noted—the shortage inevitably arrived. In that circumstance, the wide-billed finch would be more likely to survive and eventually to reproduce. Darwin also knew that offspring tend to resemble their parents in many ways (although he did not know the mechanism of this transmission), and so the wide-billed finch was likely to have wide-billed progeny. A narrow-billed finch, on the other hand, might not survive long enough to reproduce; so obviously, it would not contribute any narrow-billed descendants to the next gener-ation. The upshot of all this is that the next generation would contain more wide-billed birds, and fewer narrow-billed birds, than the generation before.

Of course, the same logic would also apply to other populations of organisms. For example, fish vary in their coloration, and those that are slightly darker in color might be better camouflaged against the river’s bottom—and so they’re more likely to escape predators. Again, this would help the darker-colored fish survive long enough to repro-duce, so they could leave behind offspring that would inherit their coloration. In this way, there would be a greater number of dark-skinned fish, and fewer light-colored ones, in the next generation.

Darwin called this process natural selection, and he realized that the process, if repeated generation after generation, could produce large changes in a population. Darwin termed these changes transmutation, but they are now called evolution. Thus, if dark-colored fish are more likely to reproduce in this generation and the next, and the next after that, eventually many (and perhaps most) of the surviving fish will be the descendants of dark-colored ancestors and probably will be dark-colored themselves. In this way, a trait that renders some members of a population better adapted to survive and reproduce in their particular environment will become more and more common— leading, over the generations, to a change in the entire population.