Evidence for Evolution by Natural Selection

Since Darwin’s day, thousands of evolutionary biologists have contributed to the development of modern evolutionary theory.

Evidence for Evolution by Natural Selection

Since Darwin’s day, thousands of evolutionary biologists have contributed to the devel-opment of modern evolutionary theory. Yet, around the globe, many nonscientists have misgivings about evolution. According to one recent survey, only 40% of the people surveyed in the United States said it’s true that “human beings, as we know them, developed from earlier species of animals.” About a third of the people questioned flatly rejected this statement (J. Miller, Scott, & Okamoto, 2006; for a glimpse of the data in other countries, see Figure 2.11).

The situation is entirely different, however, within the scientific community: Virtually every modern scientist regards evolution as one of science’s best-documented, most firmly established theories. Why are they so convinced? Scientists point to numerous lines of evidence: We know (as Darwin did) that organisms can be trans-formed by selective breeding; this is the way that botanists create new hybrid plants and farmers create new breeds of cow. We understand in impressive detail how genetic mutations arise, how genes are transmitted from generation to generation, and how genes influence an organism’s traits. In addition, the fossil record provides ample con-firmation of evolution’s claims, with the bones of ancient species providing clear evi-dence for the various intermediate organisms that existed during the process in which one lineage evolved into another (Figure 2.12). Moreover, in many cases we can find anatomical leftovers in modern species that reveal the evolutionary past of the species—for example, the remnant hip and leg bones inside whales tell us that whales descended from mammals that lived on land, and the human coccyx strongly indicates that humans are descended from ancestors who had tails (Gingerich, Ul-Haq, Von Koenigswald, Sanders, Smith et al., 2009). We can also examine the molecular struc-ture of the genome in various organisms; this examination confirms the pattern of relatedness among species and, indeed, lets us map out the likely “family tree” of modern species. 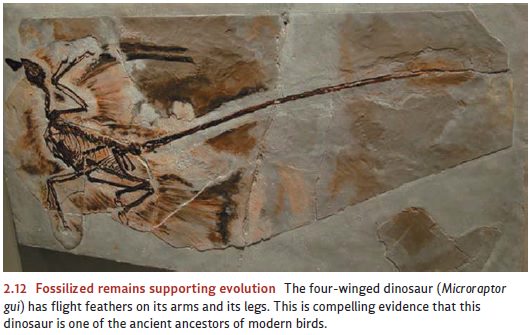 We can also watch the process of evolution unfolding in various populations. As one example, Lake Washington (just east of Seattle) was cloudy and green for many years, thanks to the exuberant growth of algae fed by treated sewage dumped into the water by surrounding cities. This situation had a significant effect on the threespine stickleback, a small fish living in the lake, because the murky water made it difficult for predators—mostly cutthroat trout—to locate (and eat) the sticklebacks (Kitano & Bolnick, 2008; also Hagen & Gilbertson, 1972; Wallace, Gilbert, & King, 2001). During the 1960s, the cities around the lake began to divert their sewage elsewhere, and by 1976 the water had cleared, putting the sticklebacks at much greater risk of being eaten.

This change in circumstances had a powerful impact on the sticklebacks. These fish vary in how much protective “body armor” they carry: Some individuals have strong, bony 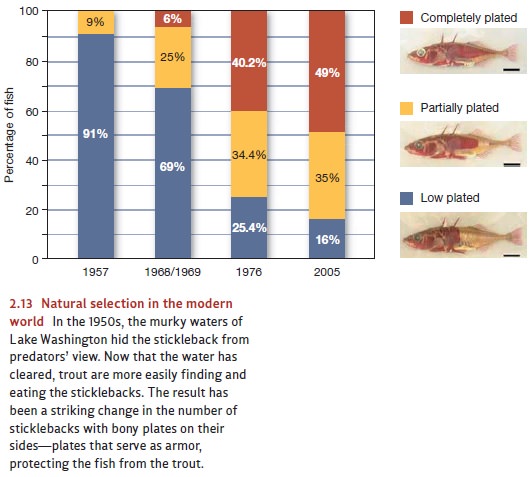 plates on their sides, and others have much lighter plates (Figure 2.13). In the mid-1950s, there was little predation (because the trout couldn’t see their prey in the murky waters), with the result that the sticklebacks in Lake Washington needed little armor—and in fact most of them had only light armor. As the waters cleared, though, these unprotected fish became highly vulnerable to predators and fewer of them survived long enough to breed. In contrast, the few fish that were more heavily armored were much more likely to survive a predator’s attack, and so they lived long enough to pass to their offspring the genes that had produced the heavy armor. This is why a 2005 survey showed that almost all of Lake Washington’s sticklebacks were either heavily or moderately armored; in contrast, the lightly armored individuals—the clear majority 50 years ago—had become more rare.