The Colpitts Oscillator, named after its inventor Edwin Colpitts is another type of LC oscillator design.

The Colpitts Oscillator, named after its inventor Edwin Colpitts is another type of LC oscillator design. In many ways, the Colpitts oscillator is the exact opposite of the Hartley Oscillator we looked at in the previous tutorial. Just like the Hartley oscillator, the tuned tank circuit consists of an LC resonance sub-circuit connected between the collector and the base of a single stage transistor amplifier producing a sinusoidal output waveform.

The  basic  configuration  of  the  Colpitts  Oscillator resembles  that  of  the Hartley Oscillator but the difference this time is that the centre tapping of the tank sub-circuit is now made at the junction of a "capacitive voltage divider" network instead of a tapped autotransformer type inductor as in the Hartley oscillator. 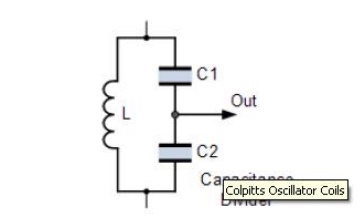