The Colpitts oscillator uses a capacitor voltage divider as its feedback source.

The two capacitors, C1 and C2 are placed across a common inductor, L as shown so that C1, C2 and L forms the tuned tank circuit the same as for the Hartley oscillator circuit.

The advantage of this type of tank circuit configuration is that with less self and mutual inductance in the tank circuit, frequency stability is improved along with a more simple design. As with the Hartley oscillator, the Colpitts oscillator uses a single stage bipolar transistor amplifier as the gain element which produces a sinusoidal output. Consider the circuit below. 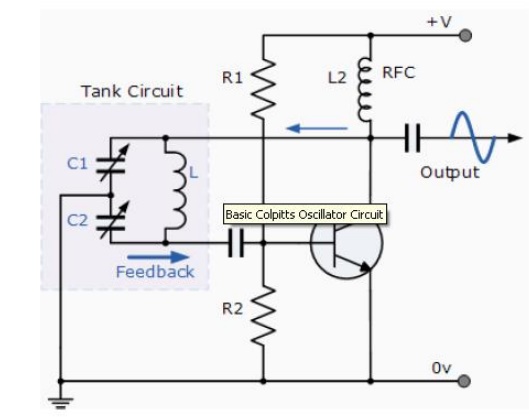 The transistor amplifiers emitter is connected to the junction of capacitors, C1 and C2 which are connected in series and act as a simple voltage divider. When the power supply is firstly applied, capacitors C1 and C2 charge up and then discharge through the coil L. The oscillations across the capacitors are applied to the base-emitter junction and appear in the amplified at the collector output. The amount of feedback depends on the values of C1 and C2 with the smaller the values of C the greater will be the feedback.

The required external phase shift is obtained in a similar manner to that in the Hartley oscillator circuit with the required positive feedback obtained for sustained un-damped oscillations. The amount of feedback is determined by the ratio of C1 and C2 which are generally "ganged" together to provide a constant amount of feedback so as one is adjusted the other automatically follows.

The frequency of oscillations for a Colpitts oscillator is determined by the resonant frequency of the LC tank circuit and is given as:

where CT is the capacitance of C1 and C2 connected in series and is given as:.

The configuration of   the      transistor amplifier is of  a Common Emitter Amplifier with the output signal 180o out of phase with regards to the input signal. The additional 180o phase shift require for oscillation is achieved by the fact that the two capacitors are connected together in series but in parallel with the inductive coil resulting in overall phase shift of the circuit being zero or 360o. Resistors, R1 and R2 provide the usual stabilizing DC bias for the transistor in the normal manner while the capacitor acts as a DC-blocking capacitors. The radio-frequency choke (RFC) is used to provide a high reactance (ideally open circuit) at the frequency of oscillation, ( ƒr ) and a low resistance at DC.

As well as using a bipolar junction transistor (BJT) as the amplifiers active stage of the Colpitts oscillator, we can also use either a field effect transistor, (FET) or an operational amplifier, (op-amp). The operation of an Op-amp Colpitts Oscillator is exactly the same as for the transistorised version with the frequency of operation calculated in the same manner. Consider the circuit below. 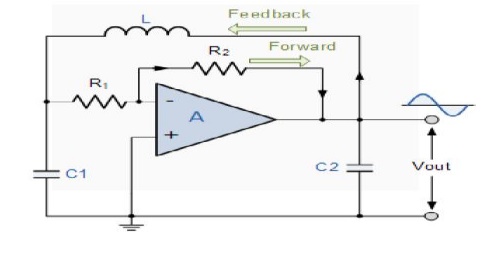