In a RC Oscillator the input is shifted 180o through the amplifier stage and180o again through a second inverting stage giving us "180o + 180o = 360o" of phase shift which is the same as 0o thereby giving us the required positive feedback. In other words, the phase shift of the feedback loop should be "0".

In a Resistance-Capacitance Oscillator or simply an RC Oscillator, we make use of the fact that a phase shift occurs between the input to a RC network and the output from the same network by using RC elements in the feedback branch, for example.

The circuit on the left shows a single resistor -capacitor network and whose output voltage "leads" the input voltage by some angle less than 90 o. An ideal RC circuit would produce a phase shift of exactly 90o.The amount of actual phase shift in the circuit depends upon the values of the resistor and the capacitor, and the chosen frequency of oscillati ons with the phase angle ( Φ ) being given as: 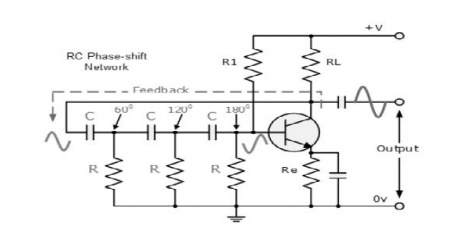 This resistor-capacitor feedback network can be connected as shown above to produce a leading phase shift (phase advance network) or interchanged to produce a lagging phase shift (phase retard network) the outcome is still the same as the sine wave oscillations only occur at the frequency at which the overall phase-shift is 360o. By varying one or more of the resistors or capacitors in the phase-shift network, the frequency can be varied and generally this is done using a 3-ganged variable capacitor

If all the resistors, R and the capacitors, C in the phase shift network are equal in value, then the frequency of oscillations produced by the RC oscillator is given as: 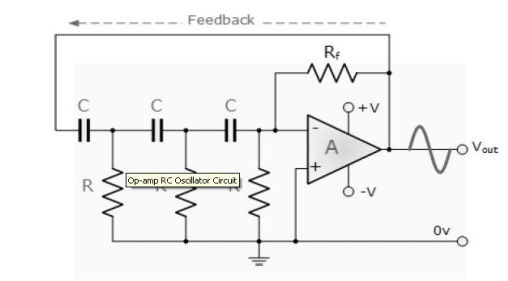 Although it is possible to cascade together only two RC stages to provide the required 180o of phase shift (90o + 90o), the stability of the oscillator at low frequencies is poor.

One of the most important features of an RC Oscillator is its frequency stability which is its ability too provide a constant frequency output under varying load conditions. By cascading three or even four RC stages together (4 x 45o), the stability of the oscillator can be greatly improved.

RC Oscillators with four stages are generally used because commonly available operational amplifiers come in quad IC packages so designing a 4- stage oscillator with 45o of phase shift relative to each other is relatively easy.