Telling the Difference Between Foreign and Self

What keeps a vertebrate from synthesizing antibodies against its own macromolecules?

Telling the Difference Between Foreign and Self

What keeps a vertebrate from synthesizing antibodies against its own macromolecules? In principle, one solution to this problem would be to have the entire repertoire of an animal’s antibody specificities explicitly encoded in the genome and expressed during development. Then the problem of preventing synthesis of antibodies against itself would be simple. None would be coded in the collection of specificities. This would be inefficient for at least two reasons. First, as we will see in the next section, the very large number of specificities needed by the immune system would use an inordinate amount of the coding potential of the genome. Second, such an inflexible system would be highly dangerous, for the moment an invader mutated and developed surface molecules not neutralized by the host cells’ immune system, the invader could freely grow in the host animal, and the entire population of host animals could be killed. It would be as though the animals didn’t possess any immune system at all, for the mutated invader would encounter no opposition.

For these reasons we expect considerable randomness, even in ge-netically identical animals, in the generation of antibody-binding spe-cificities. Therefore, at least a few animals in any population will be capable of recognizing any antigen. It is this randomness, however, that generates the problem of responding only to foreign macromolecules. If the generation of the ability to recognize diverse antigens is random and not explicitly encoded in the DNA, the same randomness will generate antibodies against the organism itself, and these self-recogniz-ing antibodies must be eliminated if the animal is to survive.

The problem of preventing self-recognition is largely solved by killing the lymphocytes that recognize macromolecules of the organism itself. This, of course, must be done after development of the immune system but before the organism is exposed to foreign macromolecules. For purposes of the molecular biology of the immune system, it is useful to consider the following simplified picture of the development of an 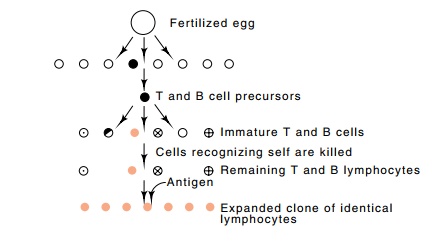 Figure 20.1 Growth and differentiation of a fertilized egg to yield the immature T cells, some of which recognize self and are killed. The remainder recognize other antigens and reside in the animal until the binding of antigen to their surface triggers them to begin growth, after which "clonal expansion" yields a population of size sufficient to synthesize appreciable quantities of immunoglobulin.

animal’s lymphocytes (Fig. 20.1). Eventually in the cells deriving from a fertilized egg, there arises a single cell that can be considered the precursor of the T and B cells. Subsequent divisions of this cell produce only T and B cells. Each of the T or B cells generally develops the ability to recognize only one antigen. Some of these antigens are macromole-cules present in the animal itself. The lymphocytes that recognize these “self” antigens are either killed or made unresponsive. The time of such deletion or inactivation varies with the animal. In mice this occurs at about the time of birth, whereas in humans it is much earlier. The lymphocytes capable of synthesizing antibodies to antigens not present at this time survive and form the pool of immature T and B lymphocytes that are capable of responding to foreign antigens.

The consequences of incomplete killing of lymphocytes that recog-nize “self” or the subsequent alteration of specificity so that “self” is recognized are predictable. In either case the immune system turns against the animal, and autoimmune conditions result. Autoimmunity is not at all uncommon. Forms of diabetes mellitus result from improper recognition of pancreatic cells. Myasthenia gravis is a condition in which antibodies are directed against muscle-nerve connections, and systemic lupus erythematosus is a disease in which antibodies are directed against many cellular components. Many other examples are also known. Autoimmune conditions also appear to result from loss of the ability to repress activation of T or B cells.