The AIDS virus is also known as the human immunodeficiency virus, or HIV, because of its effects on the immune system.

The AIDS virus is also known as the human immunodeficiency virus, or HIV, because of its effects on the immune system. It is a retrovirus that ultimately proves lethal to humans. The lethal effects of this virus derive from its crippling of the immune system by its killing of the CD4 helper T cells. Without these cells, the B cells cannot multiply in response to newly present antigens, and ultimately the infected person dies from infections that normally are of little consequence. The virus binds the CD4 cells with a viral coat protein specific for a transmem-brane cellular protein unique to these cells and a few other cell types in the human body. After binding the membrane coat of the virus fuses with the membrane of the cell and the RNA is released within the cell 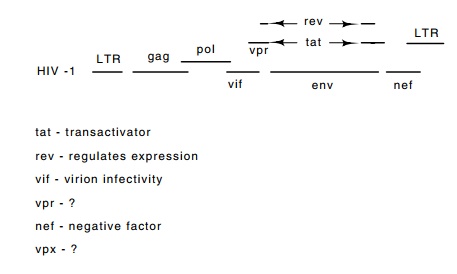 where it frequently integrates into the chromosome after its conversion to double-stranded DNA. A protein encoded by the virus or provirus (Fig. 20.12) enables the infected cell to fuse with other uninfected T4 cells, at least in cell culture. Both infected cells and cells in fusion complexes ultimately are killed.

The AIDS virus is considerably more complex than the more simple retroviruses. In addition to the gag, pol, and env genes, the virus contains five additional open reading frames that encode proteins that activate or repress viral protein synthesis or play other roles in the viral infection.