The heavy chains of mice and humans have also been examined to determine whether they are spliced together from segments as are the light chains.

The D Regions in H Chains

The heavy chains of mice and humans have also been examined to determine whether they are spliced together from segments as are the light chains. Indeed, the heavy chains are. About 300 variable H chain segments were found as well as four J regions in mice and ten in humans. There also exists a stretch of C regions, one gene for each of the constant region classes. These segments, however, do not encode all the amino acids found in the heavy chains. Thus it seemed likely that

an additional segment of DNA is spliced in to generate the complete immunoglobulin heavy chain. These segments are called D, for diver-sity, because they lie in the third hypervariable region of the heavy chain.

Almost the same strategy as was used to find the J regions worked in finding the missing segments of the heavy chains. Tonegawa had ob-served that the J regions in some myelomas were rearranged even though they were not connected to V segments. Most likely the rear-rangements involved the D segments. This hypothesis proved to be true. By cloning a rearranged J region and using the D region it contained, the D regions were located on the embryonic DNA ahead of the J regions.

One of the interesting features of the D regions is that they possess flanking sequences of seven and nine bases separated by 12 or 23 base pairs (Fig. 20.9) as do the sequences and spacers found alongside the V and J regions of the light chain. These flanking sequences are recognized by the DNA rearranging system. Cutting and joining is between a pair of sequences, one possessing a 12 base spacer, and one containing a 23 base spacer. 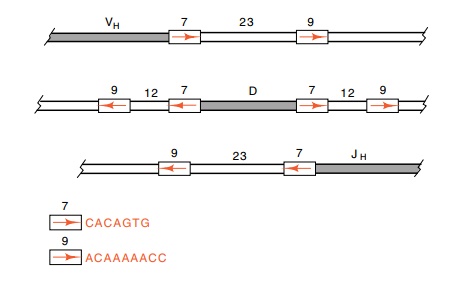 Figure 20.9 The V, D, and J regions and the positions, sizes, and sequences ofthe flanking recognition sequences used in the processing to produce an intact immunoglobulin gene.

Not only does introduction of J and D regions generate diversity, but imperfections in the rearranging process itself also generate diversity. That is, the cutting and joining are not perfect. Often deletions or insertions of several bases are made as the D segment is spliced into position (Fig. 20.10).

The variable region of the H chain that is generated by the fusions and rearrangements of different DNA regions is joined to the C region.

The C region of the heavy chain itself contains three intervening se-quences. One lies between the coding region for each stretch of 100

Figure 20.10 An insertion of three bases generated upon splicing a D and J segment.

amino acids. These groups of 100 amino acids form the domains of the protein that interact with the portions of the immune system that dispose of foreign molecules bound to antibody molecules. The fact that intervening sequences separate well-defined structural domains of a protein led to the prediction mentioned earlier that most intervening sequences in other proteins would also be found to separate the nucleo-tides coding for functional and structural domains of the protein. Such a spacing increases the chances that sequences coding for intact do-mains could be shuffled between proteins in the course of evolution.