There are limitations to polyclonal and monoclonal antibodies that can be found.

There are limitations to polyclonal and monoclonal antibodies that can be found. Antibodies desired for special purposes, for example investi-gation of enzyme catalysis, could require antibodies of such selectivity that few are likely to be found by conventional methods. While animals may synthesize hundreds of antibodies against a large antigen, the number is limited by the size of the B cell population. Even somatic mutation can be imagined not to generate all desired structures in antigen-binding sites of antibodies. How could vast numbers of variant antibodies be generated for the study of antibody-antigen interactions?

One method for increasing the number of antibody specificities available for study would be to express a large library of light and heavy chains in bacteria. If these large libraries could be combined, then the same multiplicative increase in diversity as occurs in nature could also be available. Furthermore, expressing the proteins in bacteria simplifies altering specific amino acids or mutagenizing regions of the protein. Time and cost scales would also become much more reasonable if the work is done in bacteria.

Figure 20.13 Amplification of an mRNA sequence coding for an immuno-globulin gene. Reverse transcriptase is used at the first step to make DNA. Thereafter the thermoresistant Taq polymerase is used in normal PCR reac-tions. The sequences encoding the restriction enzyme cleavage sites do not hybridize to the template on the first cycle. Thereafter they do. 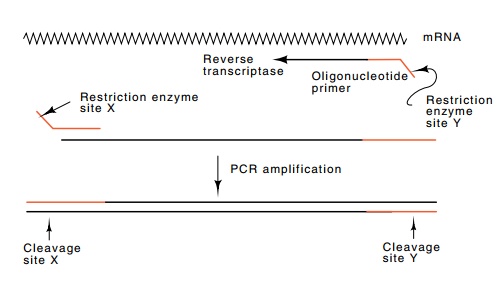 How might one begin to express a wide collection of light or heavy chains in bacteria? We cannot simply take a collection of V region genes, for most in the genome are not connected to the D or J regions and no diversification has occurred at the splicing step. We need to clone after rearrangement has taken place, and it would be best to clone only genes that have rearranged. If, however, we clone from DNA, the intervening sequences still interrupt the genes. The best approach is to clone from the mRNA using reverse transcriptase to make DNA copies. Then the polymerase chain reaction can be used to amplify the DNA. Due to the high fraction of conserved amino acids in the variable and light chain regions, it is possible to design oligonucleotides that will specifically hybridize to regions of the genes. The oligonucleotides can also be made with restriction enzyme cleavage sites so that later the resulting DNA can be easily inserted into a cloning vector (Fig. 20.13).

Cleverness in designing the cloning vector also is helpful. The incom-ing DNA must be expressed; therefore the plasmid must contain an active promoter. It should be possible to regulate this promoter in case the gene products are lethal to the cells. The lac promoter is a good one to use. Downstream from the promoter must be a good ribosome-bind-ing site. Beyond this it is helpful to have a sequence that will direct the resulting protein to be secreted from the cells. Then, at last, comes the cloning site which is flanked by the two restriction enzyme cleavage sites. The same sites were engineered into the DNA that was amplified by PCR. Finally, a translation termination sequence is needed. Addi-tional factors are that after generating libraries of light and heavy chains, combinations of the two must be formed. Resulting vectors must carry one light and one heavy chain with both being expressed under control of the lac promoter (Fig. 20.14).

Figure 20.14 Design of vectors suitable for expression of light chain or heavychain fragments. The combinatorial vector expresses both the light chain and the fragment of the heavy chain.

Screening of the recombined library for vectors carrying a light and heavy chain that bind a particular antigen must be easy. Techniques have been developed for screening large numbers of lambda plaques on plates, and thus the best vector for initial screening would be lambda phage rather than a plasmid. Later, once a desired recombinant has been found, the light and heavy chains should be transferred to a plasmid vector. Finally, rather than attempting to synthesize the entire antibody molecule, just the Fab’ fragment should be sufficient for many studies, and the probes for PCR amplification can be designed accordingly.

The technology described above has worked well and libraries have been made containing up to 106 different light chains and 106 different heavy chain fragments. These have been combined to yield libraries with truly gargantuan numbers of different antibody specificities.