Several modalities such as US, nuclear medicine, CT, and MR imaging are commonly used in diagnosing diseases of liver, pancreatic, or biliary ductal system.

Several modalities such as US, nuclear medicine, CT, and MR imaging are commonly used in diagnosing diseases of liver, pancreatic, or biliary ductal system. 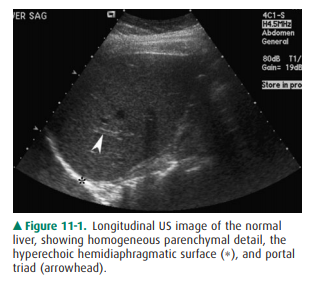 With US, normal organs are displayed as structures of different echogenicity. In general, fluid is anechoic (has noechoes). Soft tissue has echoes of mild to moderate intensity. Bone has extremely strong echoes. Abnormal organs are dis-played as areas of diffuse inhomogeneity or as focal regions of decreased or increased echogenicity within the organ. The normal appearances of the liver, biliary system, and pancreas have been well established. Echogenicity of the organs in the abdomen is evaluated in relation to other nearby organs. The pancreas is typically the most echogenic organ in the upper abdomen, followed by the liver. The liver typically has homo-geneous parenchymal detail (Figure 11-1). Numerous intra-hepatic vessels including portal veins and hepatic veins are easily seen within the liver. The gallbladder appears as an anechoic pear-shaped structure along the inferior aspect of the liver (Figure 11-2). It normally has a thin, homogeneous wall less than 3 mm in thickness. The degree of distention ofthe gallbladder varies with postprandial intervals. As is ex-pected, it contracts after a meal and distends in the fasting state. The biliary ducts are thin tubes, the walls of which are 1.5 mm or less (essentially unmeasurable). The ducts in-crease in caliber as they extend from the liver to the sphincter of Oddi (Figure 11-3). The upper limit in caliber of the ex-trahepatic biliary ducts increases with age. When measured at the level where it crosses the right hepatic artery, 6 mm is usually used as the cutoff diameter. The pancreas is homoge-neous, comma-shaped, and parallel to the splenic vein and extends from the left upper quadrant caudally and to the right (Figure 11-4). In anteroposterior dimension the pan-creatic head is approximately 3 cm, the body 2.5 cm, and the tail 2 cm. The pancreas can sometimes be difficult to image with ultrasound because of its relatively posterior position and overlying bowel gas. The normal pancreatic duct, if seen, should be 3 mm or less. 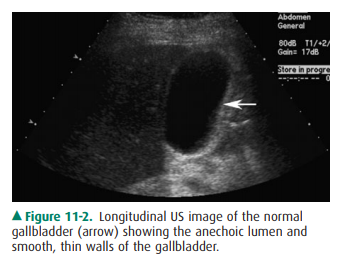 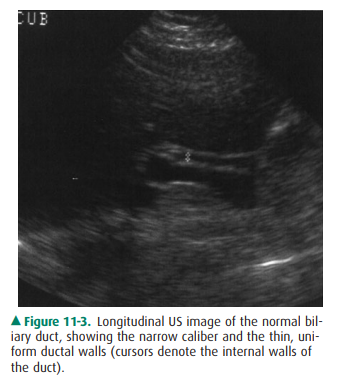 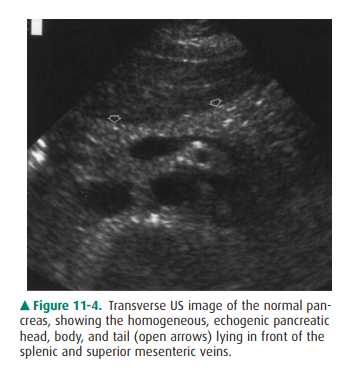 With NM, normal organs are displayed as regions of ho-mogeneous activity conforming to the general shape of the organ. Abnormal organs are displayed as diffuse inhomo-geneity or as focal areas of reduced or increased activity. In the past, the liver was most commonly studied with NM with technetium-labeled sulfur colloid. However, this technique has largely been replaced by CT, US, and MR imaging. The most common NM study of the liver today utilizes tech-netium-labeled red blood cells to evaluate for cavernous he-mangioma. Evaluation of the biliary system is a common application for NM studies. Technetium-labeled hepatobiliaryimaging iminodiacetic acid derivatives for hepatobiliary im-aging, especially disofenin and mebrofenin, are taken up by the liver, excreted into the bile, carried to the biliary tree and gallbladder, and from there travel to the bowel through the extrahepatic ducts (Figure 11-5). Depending on the exact agent used, these are termed hepatic iminodiacetic acid, HIDA scans. Currently, no practical imaging of the pancreas is done by means of NM techniques. 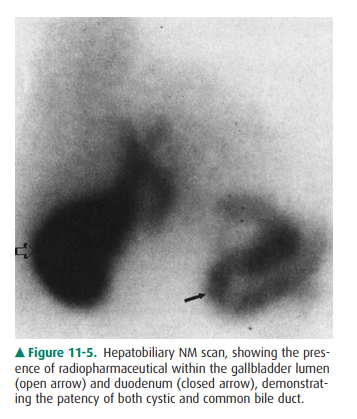 With CT, normal organs are displayed as regions of differ-ing attenuation. Abnormal organs are displayed as diffuse in-homogeneity or as focal areas of decreased or increased attenuation. The liver, biliary system, and pancreas are well demonstrated by CT (Figure 11-6). Intravenous contrast aids in their evaluation. The liver is the most dense organ in the abdomen. The normal liver parenchyma appears homoge-neous, just as in US. The portal and hepatic vessels and the biliary ductal system are likewise easy to identify. Overall measurements of wall thickness and biliary duct caliber are the same as for US. The pancreas is easily identified on CT, and the pancreatic duct is frequently well seen. 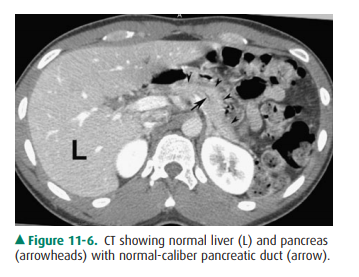 At angiography, normal organs enhance to variable ex-tents. Abnormal organs either inhomogeneously enhance or have focal areas of decreased or increased enhancement. Although the parenchyma of the normal organs is rarely demonstrated, the blood vessels of these organs are seen in exquisite detail (Figure 11-7). In the liver, both the hepatic artery and all of its branches can be seen. Delayed studies through the liver in the venous phase demonstrate the por-tal vein. The cystic artery and any collateral vessels can beangiographically demonstrated. Angiographic studies of the pancreas can demonstrate major pancreatic branches, as well as encasement, displacement, stenosis, or occlusion. 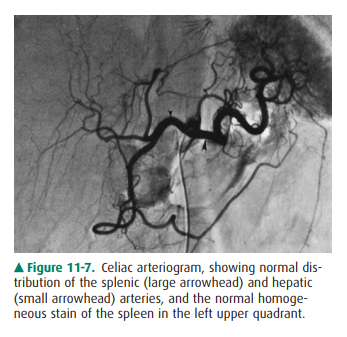 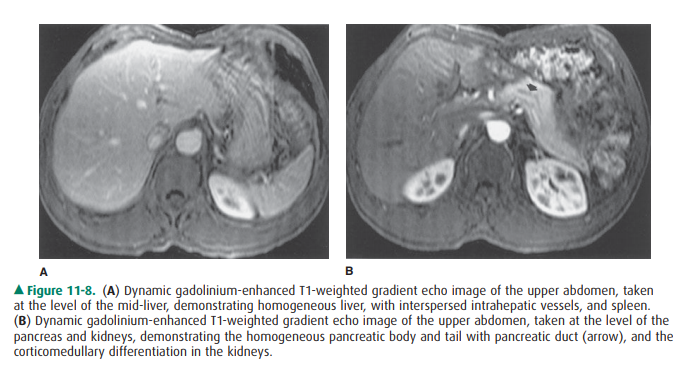