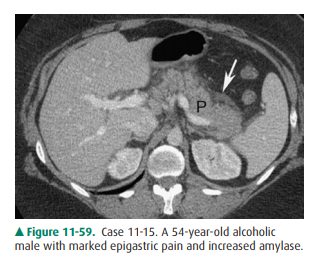 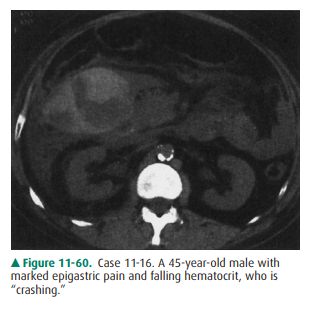 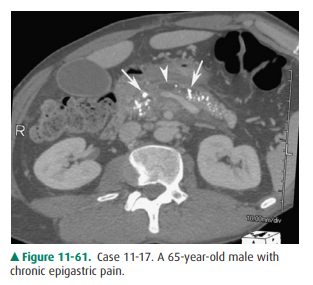 11-15. In this case, the overall size of the pancreas (P) is en-larged, and the tissue around the pancreas is edema-tous with associated fluid (arrow). All are findings ofacute edematous pancreatitis (A is the correct answer to Question 11-15).

11-16. In this case, peripancreatic inflammatory changes and a high-density collection are seen adjacent to the pancreatic head, representing a collection of blood created by hemorrhagic pancreatitis (B is the correct answer to Question 11-16).

11-17. In this case, multiple calcifications are distributed throughout the pancreas (arrows) and there is en-largement of the pancreatic duct (arrowhead) with atrophy of the parenchyma. All are findings of chronic calcific pancreatitis (B is the correct answer to Question 11-17).

Pancreatitis, an inflammatory condition of the pancreas, has a number of causes including alcohol abuse, trauma, cholelithiasis, peptic ulcer, hyperlipoproteinemia, hypercal-cemia, and infection. Pancreatic inflammation may be acute or chronic. Acute pancreatitis and chronic pancreatitis may not represent different stages of the same disease.

Acute pancreatitis can occur once or repetitively and usually has the potential for healing. It can be associated with mild to severe inflammatory edema (edematous or in-terstitial pancreatitis) or with hemorrhage (hemorrhagic or necrotizing pancreatitis). These two forms of acute pan-creatitis may be distinguishable only by the severity and time course of the disease. Edematous pancreatitis resolves within 2 to 3 days with appropriate therapy, whereas hem-orrhagic pancreatitis requires much longer to resolve. The diagnosis of simple pancreatitis is usually based on medical history, physical examination, and laboratory results. With this information, imaging studies are usually unnecessary, and scans show the pancreas to be normal or only slightly enlarged. The surrounding fat is edematous. The pancreas appears hypoechoic on US (Figure 11-62). On CT the sur-rounding fat appears as areas of streaky interstitial soft-tissue density in the transverse mesocolon around the pancreas (Figure 11-63). 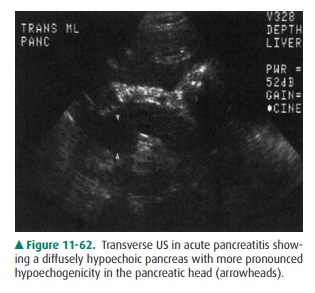 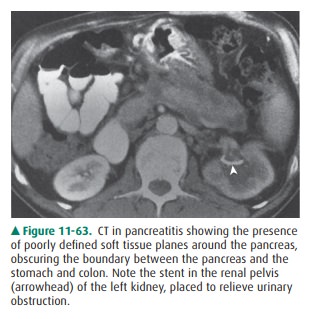 Clinical criteria to predict the severity or likelihood of complications of pancreatitis correlate well with the pres-ence and extent of extrapancreatic abnormalities on imag-ing studies. Imaging is useful in acute pancreatitis when assessing potential complications. These complications in-clude hemorrhagic pancreatitis, vascular complications, phlegmon, and abscess.

Hemorrhagic pancreatitis is usually due to erosion of small vessels, is often a serious problem, and indicates an acutely and critically ill patient. It appears as a collection of echogenic material on US. On CT, it appears as a collection of high-density material and can be extremely extensive as it is an aggressive process (Figure 11-64). This material rep-resents the blood. 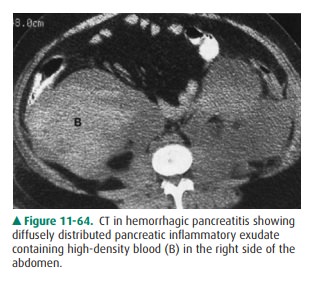 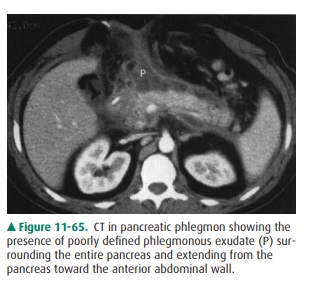 Large vessels are at risk for developing pseudoaneurysms when the histiolytic enzymes released by the inflamed pan-creas erode their walls, leading to a focal, highly vascular structure within the region of the pancreas. The splenic, gas-troduodenal, and hepatic arteries are particularly vulnerable. On US and CT, flow within an enlarged rounded vessel can be seen. Angiography establishes the diagnosis by showing a focally enlarged vessel, sometimes with extravasation. How-ever, CTA is also effective for detecting pseudoaneurysms re-lated to pancreatitis.

Phlegmon is an inflammatory, boggy, edematous, soft-tissue mass, distinct from fluid, arising from the pancreas and diffusely spreading away from it. Phlegmon appears as diffuse soft-tissue echogenicity or density process sur-rounding the pancreas and contains neither the blood of hemorrhagic pancreatitis nor the fluid of an abscess (Figure 11-65). 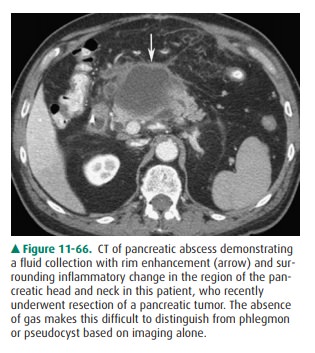 Abscesses are a potentially life-threatening complication of pancreatitis. Infection associated with pancreatitis can bethought of as representing infected necrosis (diffuse infection without pus collection) or pancreatic abscess (collection of pus surrounded by a capsule). Infected necrosis is harder to identify on imaging studies than is pancreatic abscess, be-cause it is less distinct and blends into the surrounding edema. On US, abscess appears as a poorly defined anechoic or hypoechoic lesion. It enhances sound posteriorly and may contain debris. Gas appears as a poorly defined echogenicfocus within the nondependent aspect of the lesion and casts a “dirty” shadow. On CT, the lesion is poorly defined and may contain gas collections. After contrast material infusion, the border enhances. If gas is absent, abscess cannot be differen-tiated from phlegmon or pseudocyst (Figure 11-66). In gen-eral, NM and angiography do not have a major role in evaluation of acute pancreatitis.