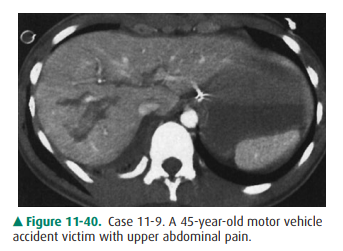 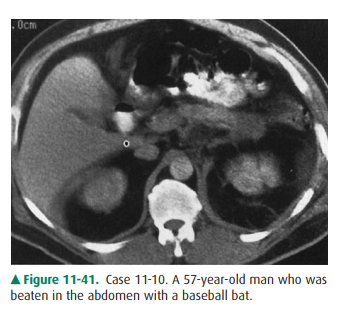 11-9. In this case, the liver has an irregularly linear lesion in its central aspect, representing a liver laceration (B is the correct answer to Question 11-9).

11-10. In this case, there is a low-density bulbous enlarge-ment of the pancreatic tail, representing a pancreatic injury (A is the correct answer to Question 11-10).

Hepatic injury is common after blunt trauma. Hepatic in-juries may be life-threatening as a result of bleeding and shock, but more often surgery is not required. Observation and systemic support may be the only treatment necessary. Like trauma to any other organ, injury to the liver varies from mild to severe. A mild injury of the liver produces a localized collection of traumatized liver tissue and an interstitial hematoma, like a bruise, which is termed a contusion.

Most blunt abdominal trauma in the United States is radi-ographically evaluated with CT. Angiography is used to a lesser extent. US, NM, and MR imaging are of little or no value in a general survey of abdominal trauma. On CT, hepatic contusion is seen as a low-attenuation lesion, perhaps with mass effect on surrounding hepatic vessels. Associated hemoperitoneum is not usually seen. On CT, hepatic laceration appears as an irreg-ular, stellate, or linear lesion through the liver parenchyma (Figure 11-40), sometimes extending to the porta hepatis, liver capsule, or IVC (Figure 11-42). A hallmark of severe trauma to upper abdominal organs is accompanying hemoperitoneum, which appears as a collection of high-density material at the site of bleeding and is termed the sentinel clot. Acute blood that has migrated away from the site of active bleeding, or old hemoperitoneum at any site, often has the attenuation of sim-ple or near-simple fluid and can resemble intraperitoneal fluid, or ascites, from a number of causes. NM hepatobiliary scans, also called HIDA (hepatobiliary iminodiacetic acid) scans, can be used to assess for a bile leak if that is suspected. 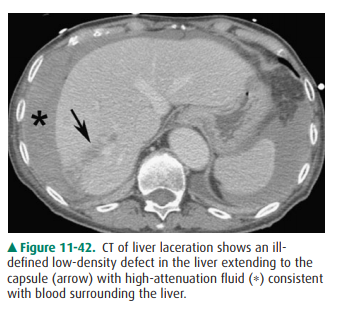 Ascites is a nonspecific reaction of the peritoneal space to a variety of causes, including tumor, inflammation, trauma, increased systemic venous resistance (eg, congestive heart failure), renal or hepatic insufficiency, and many other con-ditions. It is characterized by the production of intraperi-toneal fluid. This fluid can be simple, a transudate, in which case it has fluid density (Figure 11-43) and is free to move tothe dependent portion of the abdominal or pelvic cavity with patient movement. Alternatively, it can be complex, an exudate, in which case it is denser than simple fluid, is ac-companied by solid tissue (eg, tumor deposits in peritoneal metastases) or layered material (eg, blood from trauma or inflammatory cellular debris in peritonitis), and often is loc-ulated, or unable to move freely throughout the intraperi-toneal cavity (eg, abscess). 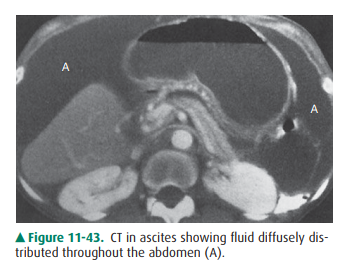 Pancreatic injury is uncommon, but potentially serious. Mortality from pancreatic injuries is nearly 20%. Being crushed against the spine probably accounts for the fre-quency of injury to the body of the pancreas. Pancreatic trauma may or may not be associated with increased amylase. Usually caused by blunt trauma, pancreatic trauma is often associated with injuries to other organs, such as liver and bowel. These injuries produce intraperitoneal blood and fluid and interstitial mesenteric edema, which can be confus-ing. As with hepatic trauma, CT with intravenous contrast is usually the modality of choice to evaluate pancreatic trauma, but even on CT, the diagnosis can be difficult. On CT, the pancreas may be ill defined, enlarged, or even disrupted, that is, fractured.

Bowel and mesenteric injuries are found in approxi-mately 5% of all patients undergoing laparotomy after motor vehicle accidents. Injuries of the bowel and mesen-tery frequently accompany injury to the liver or pancreas. These injuries can result in massive intraperitoneal bleed-ing from disruption of mesenteric vessels, or peritonitis from bowel perforation. As elsewhere, CT is the modality of choice to evaluate patients for possible bowel or mesenteric injuries, but these injuries, like those to the pancreas, can be difficult to detect. On CT, injuries of the bowel and mesen-tery include free air with the intraperitoneal or retroperi-toneal spaces, free intra-abdominal fluid, circumferential or eccentric bowel wall thickening, enhancement of the bowel wall, streaky soft-tissue infiltration of the mesenteric fat, free mesenteric hematoma (Figure 11-44), and especiallysentinel clot. Angiography may demonstrate free extravasa-tion of contrast material in injuries of the mesenteric ves-sels, and percutaneous embolization may stop bleeding when surgery is not possible. 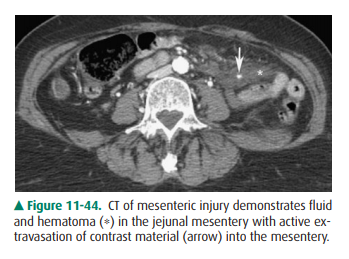