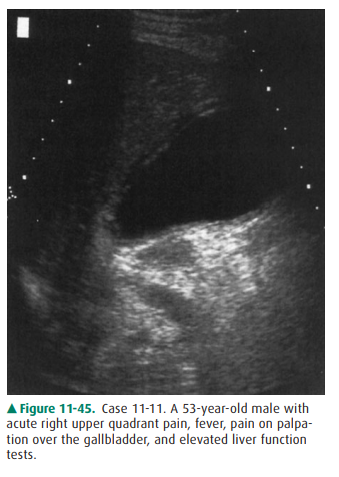 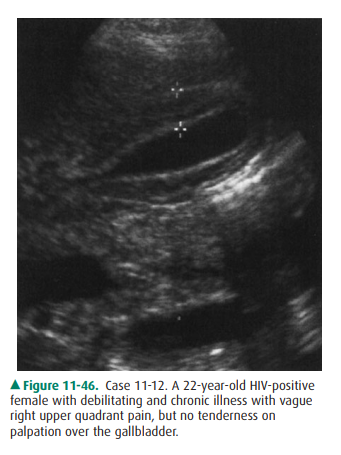 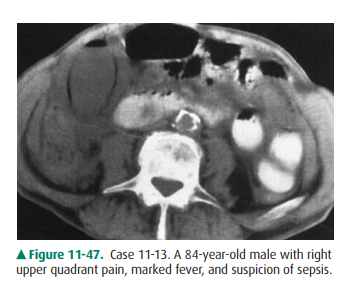 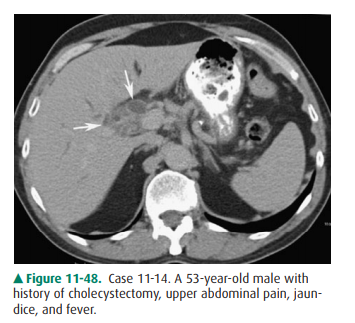 11-11. In this case, the gallbladder is distended and the wall is thickened, measuring more than 5 mm, and has multiple lamina, indicating gallbladder wall inflam-mation from acute cholecystitis (A is the correct an-swer to Question 11-11).

11-12. In this case, the gallbladder wall is markedly thick-ened, measuring over 1 cm, with multiple lamina, but is not tender to palpation, findings often seen with AIDS cholangiopathy (B is the correct answer to Question 11-12).

11-13. In this case, gas within the gallbladder wall and lumen is the primary abnormality, indicating emphy-sematous cholecystitis (B is the correct answer to Question 11-13).

11-14. In this case, CT demonstrates dilatation of the biliary ducts with enhancement and thickening of the wall (arrows). In the clinical setting of fever and jaundice, this most strongly suggests cholangitis (B is the cor-rect answer to Question 11-14).

Calculi are a common problem in the gallbladder and biliary ducts. Cholelithiasis is one of the most common abdominal disorders overall and is the most common cause of cholecys-titis, as well as the most common indication for abdominal surgery. Gallstones develop when the composition of bile, which includes bile salts, lecithin, and cholesterol, varies from normal and creates supersaturation of cholesterol, which then precipitates. Historically, patients thought to be harbor-ing gallstones on the basis of clinical criteria were examined by oral cholecystography, which shows filling defects in the gallbladder lumen opacified by orally ingested iodinated con-trast material. However, this examination has been largely re-placed by sonography, occasionally supported by other imaging information. On US, gallstones usually appear as mobile, intraluminal, echogenic foci that cast a well-defined acoustic shadow (Figure 11-49). Two other possible appear-ances are echogenic foci in the gallbladder fossa without visi-ble surrounding bile when the gallbladder is contracted, and small, mobile, echogenic foci that do not cast a shadow. On CT, gallstones appear as dense, well-defined, intraluminal structures (Figure 11-50), but their density can vary from fat density to near bone density, depending on the relative con-centration of calcium and cholesterol. Because of their vary-ing density, they can sometimes be difficult to see on CT. MR imaging of the biliary system, especially MRCP, has become more important in biliary imaging, including the detection of calculi of the gallbladder and biliary tree. Although US re-mains the primary and initial means of identifying biliary calculi, MRCP can be used as a supplementary technique, es-pecially in ductal calculi, because imaging of the biliary treeby US may be suboptimal when obscured by bowel gas. MRCP can depict the biliary system, filling defects within the biliary tree (Figure 11-51), and congenital variants of the biliary ducts and is about as accurate as ERCP in displaying a biliary “road map.” It can also be used to evaluate the biliary ducts when ERCP is impossible to perform, such as when the patient has undergone a Billroth procedure, interrupting the continuity of the upper gastrointestinal tract. NM and angiography have no major role at this time in assessment of gallstones. 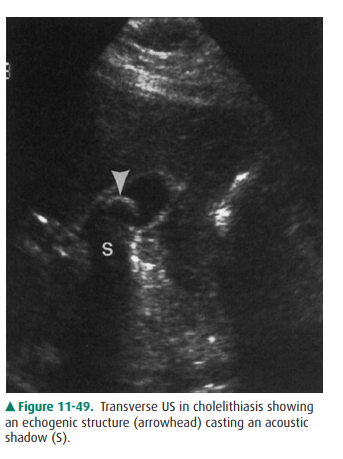 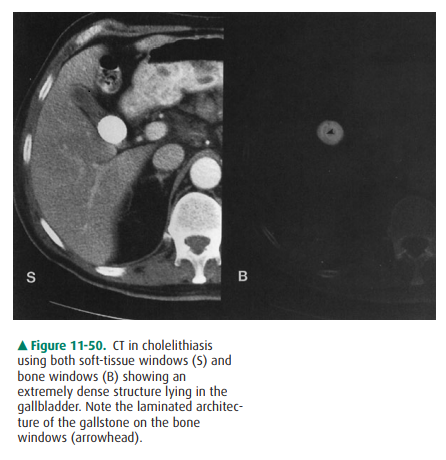 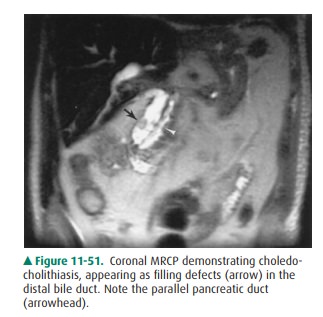 Choledocholithiasis occurs when calculi pass from the gallbladder into the biliary ducts or when calculi develop originally within the ductal system. Regardless of origin, they may obstruct the biliary ducts, cause biliary colic, and lead to cholangitis. Common duct stones can be evaluated with US, CT, and MRI, or by direct visualization with ERCP. On US, choledocholithiasis appears as echogenic foci within the lumen of the biliary duct. Sonographically, common duct stones are detected less readily than gallbladder stones, and meticulous technique is required. The entire course of the common bile duct may be technically difficult or impossible to follow. Choledocholithiasis can cause acoustic shadows, but for technical reasons these stones are detected less fre-quently than cholelithiasis (Figure 11-52). On CT, choledo-cholithiasis appears as intraluminal biliary ductal foci, which, like gallbladder stones, may vary in density from hypodense to isodense to hyperdense to bile, depending on their compo-sition (Figure 11-53). On MRCP, choledocholithiasis is seen as a filling defect in the duct. 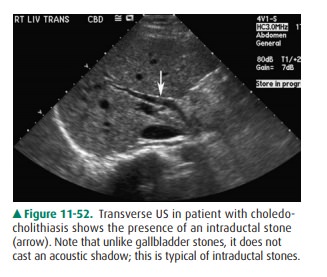 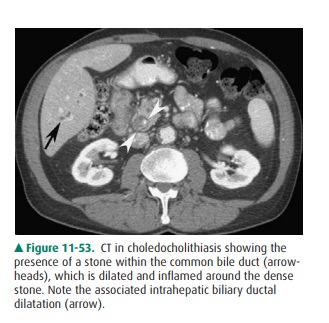 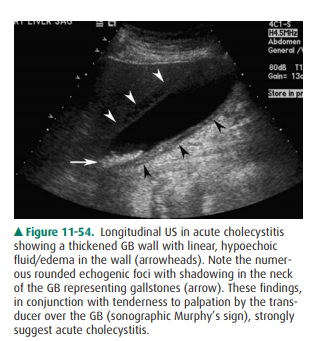 Hepatobiliary NM HIDA scans depict acute cholecystitis as an absence of filling of the gallbladder with the radionu-clide once it is excreted by the liver into the biliary ducts; this absence of filling is due to the obstruction of the cystic duct lumen by inflammatory edema of the cystic duct wall (Figure 11-55). Sufficient time must be given to fill the gallbladder. This time interval depends upon whether or not morphine is administered. Morphine increases the tone of the sphincter of Oddi and increases intraluminal common bile duct pressure to overcome the resistance to bile flow into the gallbladder in chronic cholecystitis, but not in acute cholecystitis when a stone obstructs the duct. Acute cholecystitis is diagnosed when absence of activity is noted either 45 minutes after morphine augmentation or after 4 hours without morphineaugmentation. Delayed gallbladder visualization after 1 hour usually reflects chronic cholecystitis. On CT, the morphologic findings in patients with acute cholecystitis are similar to the US findings, including gallstones and thickened and inhomo-geneous gallbladder wall. However, CT is not as sensitive as US or NM either to the presence of gallstones or to acute cholecystitis. MR imaging can depict the presence of gallblad-der wall inflammation in the absence of wall thickening by demonstrating wall enhancement following Gd infusion (Figure 11-56). The exact role of MR imaging in cholecystitis has not yet been completely evaluated. Angiography has no role in the diagnosis of cholecystitis. 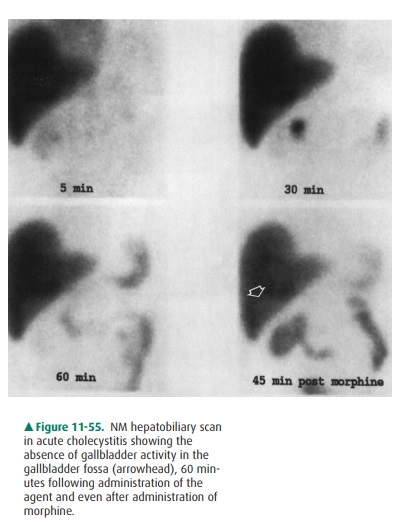 Many potential complications and conditions are associated with cholecystitis. These include hydrops, porcelain gallbladder, milk-of-calcium bile, and emphysematous cholecystitis.

Hydrops refers to the marked distention of the gallblad-der by clear, sterile mucus, usually under conditions of chronic, complete cystic duct obstruction. On imaging stud-ies, the primary finding is enlargement of the gallbladder (Figure 11-57). 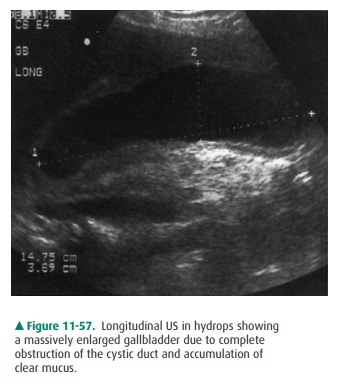 Porcelain gallbladder refers to calcification of the gall-bladder wall, as a result of chronic inflammation causing dystrophic calcification and often associated with recur-rent acute cholecystitis. Gallbladder stones are usually present, and there is a higher incidence (approximately 10% to 20%) of gallbladder carcinoma. On imaging stud-ies, complete or incomplete circular wall calcification is present and is seen as a curvilinear, highly echogenic wall on US or as a curvilinear, high-attenuation wall on CT (Figure 11-58). 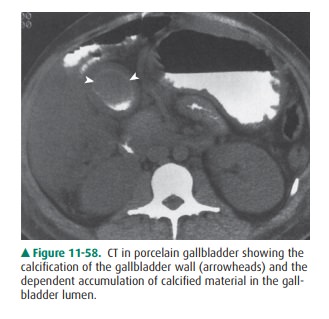 Milk-of-calcium bile refers to a precipitation of calci-fied material within the lumen of the gallbladder, usually associated with chronic cholecystitis. US shows echogenic sludgelike material, possibly with gallstones. CT demon-strates the distinctive appearance of a horizontal bile-calcium level.

Emphysematous cholecystitis is a distinctive condition and should be treated as a medical/surgical emergency. Like acute cholecystitis, it is marked by intense gallbladder wall in-flammation, but unlike acute cholecystitis, it is not necessar-ily associated with gallstones. It may be related to ischemia of the gallbladder wall from small-vessel disease, and it affects an older age group than does acute cholecystitis. The most common group affected is older diabetic men. Gas is released by bacterial invasion and accumulates in the gallbladder wall, lumen, or both. On US, gas is seen as an echogenic focus pro-ducing poorly defined or “dirty” shadowing behind it. The wall is thickened, perhaps focally, with gas. On CT, air-density gas is seen within the lumen or wall (Figure 11-47). MR imagingand angiography have no current role in evaluation of these complications.

AIDS-associated cholangiopathy is marked by the fre-quent isolation of opportunistic organisms, including Cryp-tosporidium and cytomegalovirus from the bile, and by considerable inflammation of the bile duct wall. On US or CT, the gallbladder or biliary duct walls may be markedly thickened (greater than 4 mm) (Figure 11-46) and may contain irregular lamina. Inflammation is present, but stones may or may not be present. Cholangiography shows irregular stric-tures, papillary stenosis, or both.

Ascending cholangitis is a bacterial inflammation of both walls and lumina of the biliary system, including the gallbladder. It is almost always due to obstruction of the biliary tract, especially when caused by choledocholithiasis and distal bile-duct stenosis. The presence of grossly puru-lent material within the duct indicates suppurative cholan-gitis. Cross-sectional imaging studies are used to define the level and cause of obstruction. Cholangiography can show the abnormal biliary ducts directly. The purulent material of suppurative cholangitis may be seen as echogenic mate-rial on US, high-density material on CT, or filling defects on cholangiography.

Oriental cholangiohepatitis is a common illness in en-demic areas of Asia and can be seen in Asian immigrants in this country. It may be caused by bile duct wall injury from the parasitic infestation. Ductal stones commonly form, and the ducts are dilated. A characteristic finding is the presence of intraductal (especially intrahepatic ductal) cal-culi. These findings are readily demonstrated with US, CT, and cholangiography.