Treponema pallidum, the causative organism of syphilis, is one of a small group of spirochetes that are virulent in humans.

In the United States, the incidence of syphilis declined steadily in the 1990s and reached its lowest rate in 2000. Beginning in 2001, the rate of syphilis began to increase, especially among men who have sex with men. Rates in women also increased, although not as steeply. Between 2005 and 2006, the number of reported syphilis cases increased 11.8%. Between 2001 and 2008, the overall increase in cases of syphilis was 76%. In addition, after a 14-year decline, the rate of congenital syphilis increased 3.7% between 2005 and 2006. This increase may relate to the increase in the rate of syphilis that has occurred in past several years. One reason suggested for the rise in syphilis rates overall is the increasing use of nonpenicillin anti-biotics to treat penicillin-resistant gonorrhea; in the past, penicillin treatment of gonorrhea provided treatment for coexisting syphilis.

Treponema pallidum, the causative organism ofsyphilis, is one of a small group of spirochetes that are vir-ulent in humans. Because this motile anaerobic spirochete canrapidly invade intact moist mucosa, the most common sites of entry for women are the vulva, vagina, and cervix. Transplacentalspread may occur at any time during pregnancy and can result in congenital syphilis.

Syphilis can be a long-term disease with several stages. Primary syphilis, the first stage of the disease, is characterizedby the appearance of a chancre at the site of entry approximately 10 to 60 days after infection with T. pallidum. The chancrehas a firm, punched-out appearance and has rolled edges (Fig. 27.5). 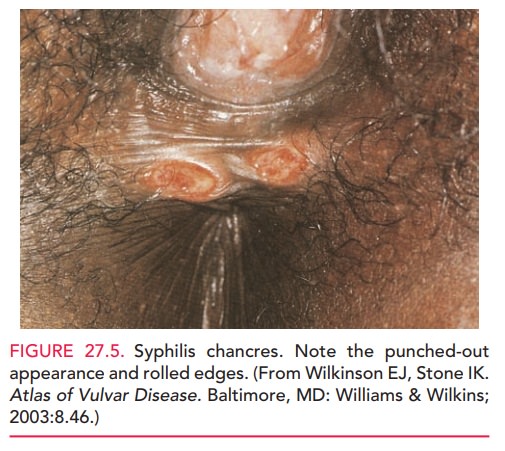 Because it is small and painless, the chancre may be missed during routine physical examination. Ade-nopathy or other mild systemic symptoms may also be pre-sent. The chancre heals spontaneously within 3 to 6 weeks. Serologic-testing results at this stage of syphilis generally are negative.

Four to 8 weeks after the primary chancre appears, manifestations of secondary syphilis develop. This stage ischaracterized by a skin rash that often appears as rough, red or brown lesions on the palms of the hands and soles of the feet. Othersymptoms include lymphadenopathy, fever, headache, weight loss, fatigue, muscle aches, and patchy hair loss. Highly infective secondary eruptions, called mucocuta-neous mucous patches, occur in 30% of patients during this stage. In moist areas of the body, flat-topped papules may coalesce, forming condyloma lata (Fig. 27.6). These may be distinguished from venereal warts by their broad base and flatter appearance. 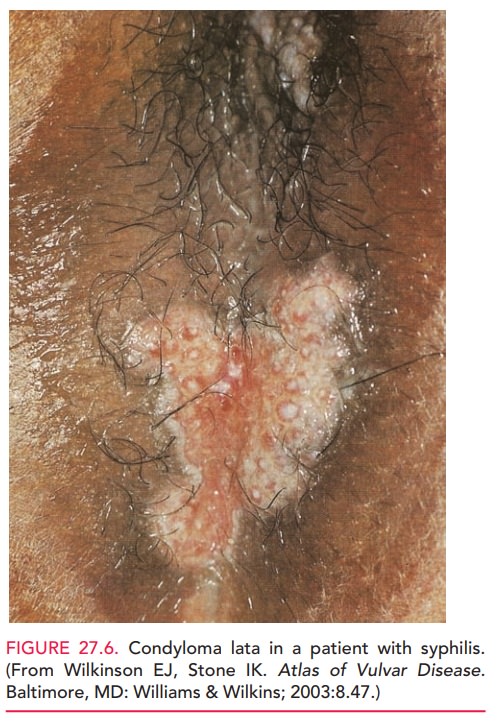 In untreated individuals, this stage also resolves sponta-neously in 2 to 6 weeks, and the disease enters the latent phase.During the latent stage, the patient has no signs or symp-toms of the disease, although serologic tests are positive. In the late or tertiary stages of the disease, transmission of the infection is unlikely, except via blood transfusion or placen-tal transfer. However, severe damage to the central nervous and cardiovascular systems develop, along with ophthalmic and auditory abnormalities. Destructive, necrotic, granulo-matous lesions, called gummas, may develop 1 to 10 years after infection.

Types of Serologic Tests for Syphilis

Microhemagglutination assay for antibodies to

A woman with a positive treponemal testwill usually have this positive result for life, irrespective of treatment or activity of the disease. When neurosyphilis is suspected, a lumbar puncture, with a VDRL performed on the spinal fluid, is required.

Syphilis is treated with benzathine penicillin G. The patient should be followed by quantitative VDRL titers and exam-inations at 3, 6, and 12 months, and should abstain from sexual intercourse until lesions are completely healed.