Pelvic inflammatory disease (PID) represents the mostserious form of sexually transmitted disease. It involves infection of the upper genital tract (endometrium, fallopian tubes, ovaries, and pelvic peritoneum) as a result of direct spread of pathogenic organisms along mucosal surfaces after initial infection of the cervix. The predominant organ-isms responsible for PID are C. trachomatis and N. gonor-rhoeae. Other organisms that have been isolated from thefallopian tubes of patients with PID include Mycoplasma,Streptococcus, Staphylococcus, Haemophilus, Escherichia coli, bac-teroides, Peptostreptococcus, Clostridium, and Actinomyces.

Timing of cervical infection in relation to the menstrual cycle is important; the endocervical mucus resists upward spread, especially during the progesterone-dominant part of the cycle. Oral contraceptives mimic this effect, which explains in part their action in limiting PID. The presence of motile sperm or strings from intrauterine contraceptives (IUC) can allow penetration of organisms through this pro-tective barrier. Tubal ligation usually provides a barrier to spread, although in some cases small micro-channels facil-itate continued spread. The relative mobility of the fallo-pian tube probably contributes to the rapid and widespread extension of infection.

The greatest risk factor for PID is prior PID. Adolescence,having multiple sexual partners, not using condoms, and infection with any of the causative organisms are impor-tant risk factors. Between 10% and 40% of women with untreated chlamydial or gonorrheal infections of the cervix will develop acute PID. The importance of early diag-nosis and treatment of PID lies in its prevention of infertility and ectopic pregnancy. Infertility results from scarring ofdamaged fallopian tubes and intraperitoneal adhesions, and occurs in approximately 15% of patients after a single episode of salpingitis, increasing to 75% after three or more episodes. The risk of ectopic pregnancy is increased 7 to 10 times in women with a history of salpingitis.

Findings in PID are often nonspecific, and patients pre-senting with these symptoms should be differentiated from those with ectopic pregnancy, septic incomplete abortions, acute appendicitis, diverticular abscesses, and adnexal tor-sion. Patients with PID may also present with only mild, nonspecific symptoms, such as vaginal discharge or inter-mittent vaginal bleeding. More pronounced signs and symptoms include muscular guarding, cervical motion ten-derness, or rebound tenderness. A purulent cervical dis-charge is often seen, and the adnexa are usually moderately to exquisitely tender with a mass or fullness potentially pal-pable. Fever or chills may also be present and the white blood cell count is usually elevated (Box 27.2). Peritoneal involvement can also include perihepatitis (Fitz-Hugh-Curtis syndrome). Perihepatitis consists of inflammationleading to localized fibrosis and scarring of the anterior surface of the liver and adjacent peritoneum. It is probably caused by chlamydial infection more often than by gonor-rheal infection, with which it was originally described Fig. 27.2).

All 3 of the following are necessary:

In severe cases or in patients with one or more prior episodes of PID, tuboovarian abscesses (TOA) may form. Patients with TOA are acutely ill, often present-ing with high fever, tachycardia, severe pelvic and abdom-inal pain, and nausea and vomiting. 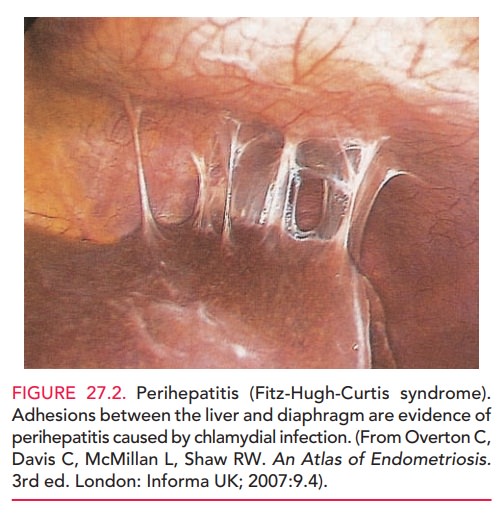 Because PID may not be associated with specific signs and symptoms, empiric treatment for PID is recommended for sex-ually active young women who appear to have no other cause of illness and who are found to have uterine tenderness, adnexal tenderness, or cervical motion tenderness on pelvic examination. Women who are diagnosed with PID should also undergo testing for chlamydial, HIV, or gonorrheal infection.

Patients with mild or moderate cases of PID can be man-aged with an oral antibiotic regimen; however, many pa-tients require hospitalization for adequate care. The decision for hospitalization should be individualized and based on certain criteria (Box 27.3). Hospitalization allows for the administration of high-dose intravenous antibiotic therapy with an antimicrobial spectrum that covers aero-bic and anaerobic organisms. In the case of TOA, surgical drainage or even hysterectomy, depending on the repro-ductive status and desires of the patient, may be warranted in patients who do not respond to an aggressive course of parenteral antibiotics. Rupture of a TOA with septic shock is a life-threatening complication with mortality approach-ing 10%. These patients must be treated surgically. 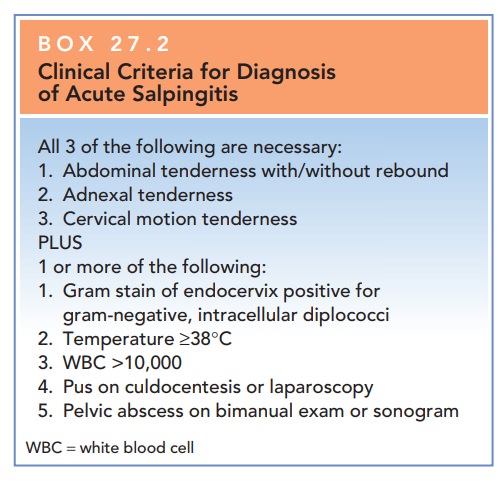 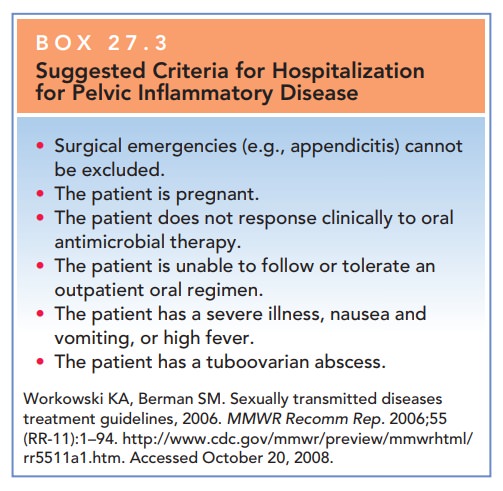