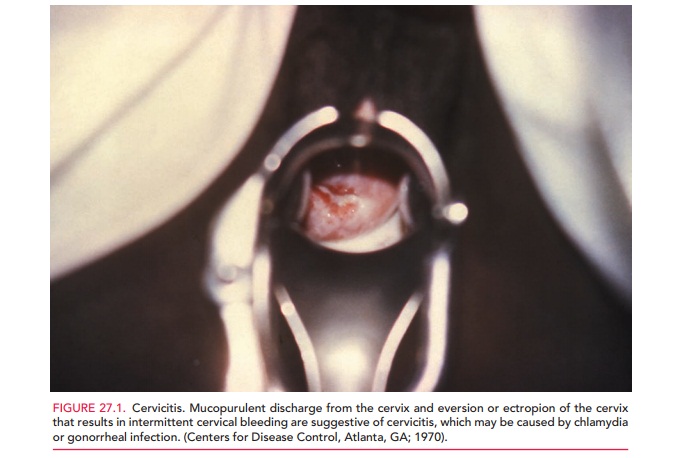 Chlamydia trachomatis is a gram-negative obligate intracel-lular bacterium that lacks the metabolic and biochemical ability to produce adenosine triphosphate (ATP) and pref-erentially infects columnar epithelial cells. Chlamydial infection is the most frequently reported infectious disease in the United States. In 2006, over one million cases were reported to the Centers for Disease Control and Pre-vention. Despite the high number of reported cases, most cases of chlamydial infection are unreported. It is estimated that over 1.7 million cases of chlamydial infections remain undiagnosed each year. If untreated, up to 40% of women withchlamydia will develop pelvic inflammatory disease (PID), which can result in significant complications, including ectopic pregnancy, chronic pelvic pain, and infertility. Chlamydialinfections are also responsible for nongonococcal urethritis and inclusion conjunctivitis. Because of the serious conse-quences of untreated infection, it is recommended that all sexually active women under the age of 25 should be screened annually. Older women with risk factors, such as multiple sexual partners or a new partner, should also receive annual screening.

Chlamydial infection is often asymptomatic. Signs and symptoms are often subtle and nonspecific, and may include abnormal vaginal discharge and vaginal bleeding. Cervici-tis, characterized by a mucopurulent discharge from thecervix and eversion or ectropion of the cervix that results in intermittent cervical bleeding, may also suggest the diagno-sis (Fig. 27.1). Ascending infection causes mild salpingitis (infection of the fallopian tubes) with insidious symptoms. Once salpingitis is established, it may remain active for many months, with increasing risk for tubal damage. Becausechlamydia is also frequently found in conjunction with Neisseriagonorrhoeae infection, any patient with known or suspected gon-orrhea infection should also be evaluated for chlamydia. 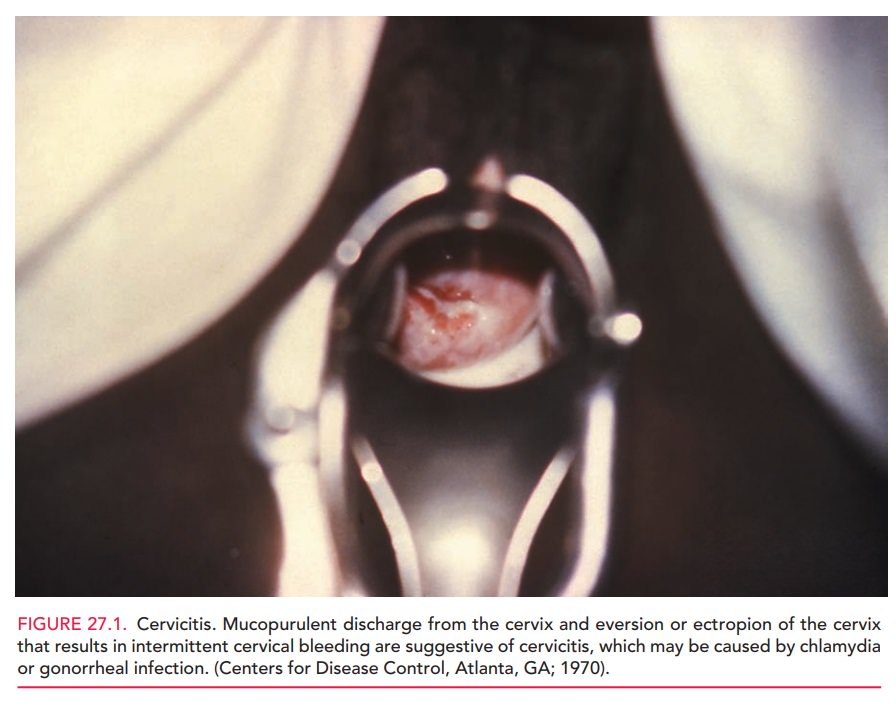 Laboratory testing for chlamydial infection is accom-plished by culture, direct immunofluorescence, enzyme immunoassay (EIA), nucleic acid hybridization tests, and nucleic acid amplification tests (NAATs) of endocervical swab specimens. NAATs are the most sensitive tests for endocervical swab specimens and are FDA-approved for use with vaginal swab specimens. Adolescents who are reluctant to undergo a pelvic examination or who receive care where pelvic examination is not possible can be tested with urine screening.

Chlamydia is treated with antibiotics including azithro-mycin or doxycycline. Alternative antibiotic therapies include erythromycin base, erythromycin ethylsuccinate, ofloxacin, or levofloxacin. Although erythromycin is an alternative treatment option, gastrointestinal side effects may be significant.

Patients with persistent symptoms, who are suspected to be noncompliant with treatment, or who may have become re-infected should be have a test of cure performed (repeated testing) 3 to 4 weeks after initial treatment is completed.

Because of the high rates of reinfection, all women with chlamydial infection should be advised to be retested 3 months after treatment. Retesting for these women should also be encouraged whenever they seek medical care in the following 3 to 12 month. Persons undergoing treatment for chlamydia should be instructed to abstain from sexual intercourse until treatment is completed and all of their sexual partners are treated