Confusion and Diffusion; Substitution and Permutation

We were introduced to symmetric encryption in Chapter 2. Here we review the two fundamentals of symmetric encryption, confusion and diffusion, as they are represented in modern algorithms. We also review cryptanalysis so that we can appreciate how encryption can fail. Finally, we study the details of the two main symmetric systems, DES and AES. We also introduce three other fairly common schemes: RC2, RC4, and RC5.

To refresh your memory and prepare you for a detailed description of DES and AES, we present here a review of important points from Chapter 2.

Confusion and Diffusion; Substitution and Permutation

Recall from Chapter 2 that confusion is the act of creating ciphertext so that its corresponding plaintext is not apparent. Substitution is the basic tool for confusion; here, we substitute one element of ciphertext for an element of plaintext in some regular manner. Substitution is also the point at which a key is typically introduced in the process. As we noted in Chapter 2, single substitutions can be fairly easy to break, so strong encryption algorithms often employ several different substitutions.

Diffusion is the act of spreading the effect of a change in the plaintext throughout the resulting ciphertext. With poor diffusion, a change to one bit in the plaintext results in a change to only one bit in the ciphertext. A cryptanalyst might trace single bits backward from ciphertext to plaintext, having the effect of reducing 2n possibilities in an n-bit ciphertext to just n, and thereby reducing the cryptanalytic complexity from exponential to linear. This reduction is not desirable; we always want to make the cryptanalyst work as hard as possible.

Substitution is sometimes represented by so-called S-boxes, which are nothing other than table-driven substitutions. Diffusion can be accomplished by permutations, or "P-boxes." Strong cryptosystems may use several iterations of a substitute-permute cycle. Such a cycle is shown in Figure 12-4. In the figure, a line entering an S-box from the top undergoes a substitution in the box. Then it is sent to another S-box in the line below by permutation of the order in some way; this permutation is represented by the lines spreading out at many angles. 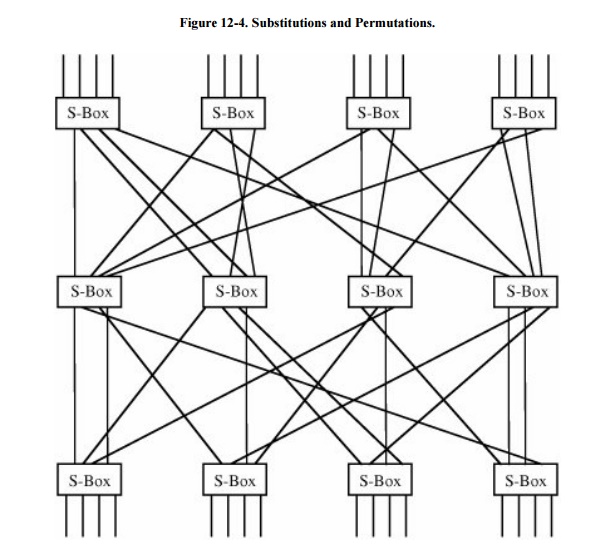 As with all key systems, if the key is revealed (stolen, guessed, bought, or otherwise compromised), the interceptors can immediately decrypt all the encrypted information they have available. Furthermore, an impostor using an intercepted key can produce bogus messages under the guise of a legitimate sender. For this reason, in secure encryption systems, the keys are changed fairly frequently so that a compromised key will reveal only a limited amount of information.

Distribution of keys becomes a problem. Keys must be transmitted with utmost security since they allow access to all information encrypted under them. For applications that extend throughout the world, this can be a complex task. Often, couriers are used to distribute the keys securely by hand. Another approach is to distribute the keys in pieces under separate channels so that any one discovery will not produce a full key. (For example, the Clipper program in the United States uses a 2-piece key distribution.) This approach is shown in Figure 12-5.

As described earlier, the number of keys increases with the square of the number of people exchanging secret information. This problem is usually contained by having only a few people exchange secrets directly so that the network of interchanges is relatively small. If people in separate networks need to exchange secrets, they can do so through a central "clearing house" or "forwarding office" that accepts secrets from one person, decrypts them, reencrypts them using another person's secret key, and transmits them. This technique is shown in Figure 12-6. 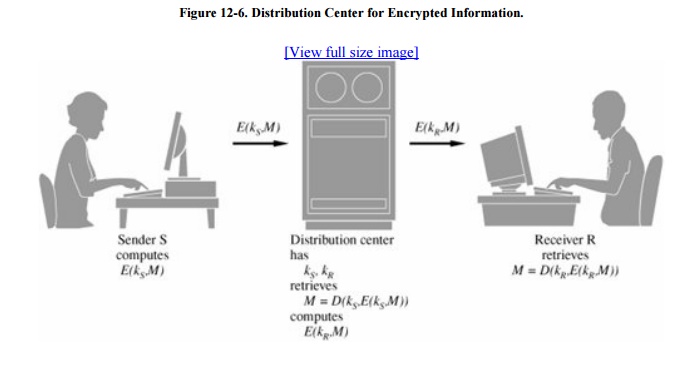