We present MerkleHellman in two steps, to aid understanding. First we outline the operation of the MerkleHellman knapsack encryption method. Then we revisit the technique in more detail.

A knapsack is represented as a vector of integer terms in which the order of the terms is important. There are actually two knapsacksan easy one, to which a fast (linear time) algorithm exists, and a hard one, derived by modifying the elements of the easy knapsack. The modification is such that a solution with the elements of either knapsack is a solution for the other one as well. This modification is a trapdoor, permitting legitimate users to solve the problem simply. Thus, the general problem is NP-complete, but a restricted version of it has a very fast solution.

The algorithm begins with a knapsack set, each of whose elements is larger than the sum of all previous elements. Suppose we have a sequence where each element ak is larger than a1 + a2 +…+ ak-1. If a sum is between ak and ak+1, it must contain ak as a term, because no combination of the values a1, a2,…, ak-1 could produce a total as large as ak. Similarly, if a sum is less than ak, clearly it cannot contain ak as a term.

The modification of the algorithm disguises the elements of the easy knapsack set by changing this increasing -size property in a way that preserves the underlying solution. The modification is accomplished with multiplication by a constant mod n.

Detailed Explanation of the MerkleHellman Technique

This detailed explanation of MerkleHellman is intended for people who want a deeper understanding of the algorithm.

This solution proceeded in an orderly manner. We considered each integer as possibly contributing to the sum, and we reduced the problem correspondingly. When one solution did not produce the desired sum, we backed up, discarding recent guesses and trying alternatives. This backtracking seriously impaired the speed of solution.

With only six integers, it did not take long to determine the solution. Fortunately, we discarded one of the integers (73) immediately as too large, and in a subproblem we could dismiss another integer (38) immediately. With many integers, it would have been much more difficult to find a solution, especially if they were all of similar magnitude so that we could not dismiss any immediately.

Suppose we place an additional restriction on the problem: The integers of S must form a superincreasing sequence, that is, one where each integer is greater than the sum of all preceding integers. Then, every integer ak would be of the form

In the previous example, [1,4,11,17,38,73] is a superincreasing sequence. If we restrict the knapsack problem to superincreasing sequences, we can easily tell whether a term is included in the sum or not. No combination of terms less than a particular term can yield a sum as large as the term. For instance, 17 is greater than 1 + 4 + 11 (=16). If a target sum is greater than or equal to 17, then 17 or some larger term must be a term in the solution.

An example solving a simple knapsack for targets 96 and 95 is shown in Figure 12-15.

The Knapsack Problem as a Public Key Cryptographic Algorithm

However, in arithmetic mod n, the product of two large numbers may in fact be smaller than the product of two small numbers, since results larger than n are reduced to between 0 and n-1. Thus, the superincreasing property of a sequence may be destroyed by multiplication by a constant mod n.

Modular arithmetic is sensitive to common factors. If all products of all integers are mapped into the space of the integers mod n, clearly there will be some duplicates; that is, two different products can produce the same result mod n. For example, if w * x mod n = r, then w * x + n mod n = r, w * x + 2n mod n = r, and so on. Furthermore, if w and n have a factor in common, then not every integer between 0 and n-1 will be a result of w * x mod n for some x. 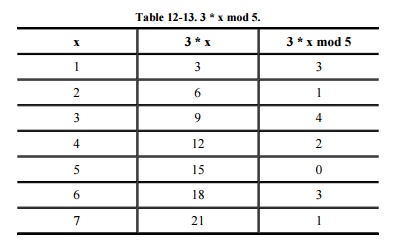 However, if we choose w = 3 and n = 6, not every integer between 0 and 5 is used. This occurs because w and n share the common factor 3. Table 12-14 shows the results of 3 * x mod 6. Thus, there may be some values that cannot be written as the product of two integers mod n for certain values of n. For all values between 0 and n-1 to be produced, n must be relatively prime to w (that is, they share no common factors with each other). 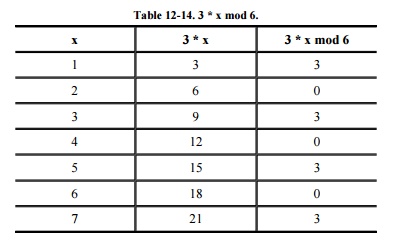 With these results from modular arithmetic, Merkle and Hellman found a way to break the superincreasing nature of a sequence of integers. We can break the pattern by multiplying all integers by a constant w and taking the result mod n where w and n are relatively prime.

To perform an encryption using the MerkleHellman algorithm, we need a superincreasing knapsack that we can transform into what is called a hard knapsack. In this section we show you just how to do that.

is such a sequence.

The superincreasing sequence just selected is called a simple knapsack. Any instance of the knapsack problem formed from that knapsack has a solution that is easy to find.

After selecting a simple knapsack S = [s1, s2,…,sm], we choose a multiplier w and a modulus n. The modulus should be a number greater than the sum of all si. The multiplier should have no common factors with the modulus. One easy way to guarantee this property is to choose a modulus that is a prime number, since no number smaller than it will have any common factors with it.

Finally, we replace every integer si in the simple knapsack with the term

The encipherment of message P is a sequence of targets, where each target is the sum of some of the terms of the hard knapsack H. The terms selected are those corresponding to 1 bits in Pi so that Pi serves as a selection vector for the elements of H. Each term of the

The legitimate recipient knows the simple knapsack and the values of w and n that transformed it to a hard public knapsack. The legitimate

Remember that H is the hard knapsack derived from the simple knapsack S. H is obtained from S by

The ciphertext message produced by the encryption algorithm is

To decipher, multiply C by w-1, since

To recover the plaintext message P, the legitimate recipient would solve the simple knapsack problem with knapsack S and target w-1 * Ci for each ciphertext integer Ci. Since w-1 * Ci = S * P mod n, the solution for target w-1 * Ci is plaintext block Pi, which is the message originally encrypted.

To decipher, we multiply these messages by 8 mod 17 because 8 is 15-1 mod 17. Then we can easily solve the simple knapsacks, as shown here:

Cryptanalysis of the Knapsack Algorithm

In this example, because m is 4, we can readily determine the solution to the knapsack problem for 13, 40, 24, and 29. Longer knapsacks (larger values of m), which also imply larger values of the modulus n, are not so simple to solve.

Typically, you want to choose the value of n to be 100 to 200 binary digits long. If n is 200 bits long, the si are usually chosen to be about

2200 apart. That is, there are about 200 terms in the knapsacks, and each term of the simple knapsack is between 200 and 400 binary digits long. More precisely, s0 is chosen so that 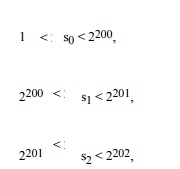 and so on, so that there are approximately 2200 choices for each si.

With such large terms for S (and H), it is infeasible to try all possible values of si to infer S given H and C. Even assuming a machine could do one operation every microsecond, it would still take 1047 years to try every one of the 2200 choices for each si. A massively parallel machine with 1000 or even 1,000,000 parallel elements would not reduce this work factor enough to weaken the encryption.

Weaknesses of the MerkleHellman Encryption Algorithm

The MerkleHellman knapsack method seems secure. With appropriately large values for n and m, the chances of someone's being able to crack the method by brute force attack are slim.

However, an interceptor does not have to solve the basic knapsack problem to break the encryption, since the encryption depends on specially selected instances of the problem. In 1980, Shamir found that if the value of the modulus n is known, it may be possible to determine the simple knapsack. The exact method is beyond the scope of this book, but we can outline the method of attack. For more information, see the articles by Shamir and Zippel [SHA80] and Adleman [ADL83].

Given the ratio ρ, determine the sequence

A more serious flaw was identified later by Shamir [SHA82] . The actual argument is also beyond the scope of this book, but again it can be sketched fairly briefly. The approach tries to deduce w and n from the hi alone.

The approximate size of n can be deduced from the fact that it will be longer than any of the hi since they have been reduced mod n; however, n will not be substantially longer than the longest hi, since it is likely that the results after taking the modulus will be fairly evenly distributed between 1 and n.

Assume you are trying to guess w. You might iteratively try different candidate values ω= 1, 2, 3, . . . for w. The graph of ω * hi mod n as a function of ω would increase steadily until a value of ω * hi was greater than n. At that point, the graph of ω * hi would be discontinuous and have a small value. The values of ω * hi would then resume their steady increase as ω increased until ω * hi exceeded n again. The graph would form a progression of jagged peaks, resembling the teeth of a saw. The slope of each "tooth" of the graph is hi. Figure 12-16 displays a graphical representation of this process.

Then, w will be at one of the places where all of the curves are discontinuous and fall from a high value to a low one. Two such graphs are shown in Figure 12-17. The problem of determining w is thus reduced to finding the point at which all of these discontinuities coincide. 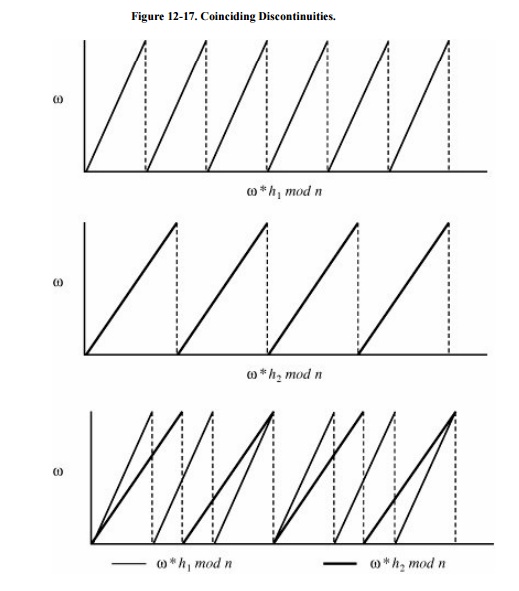 The actual process is a little more difficult. The value of n has been replaced by real number N. Since n and N are unknown, the graphs are scaled by dividing by N and then approximating by successive values of the real number ω/N in the function (ω/N) * hi mod 1.0.

Fortunately, this reduces to the solution of a system of simultaneous linear inequalities. That problem can be solved in polynomial time. Therefore, the Merkle Hellman knapsack problem can be broken in reasonable time.

Notice that this solution does not apply to the general knapsack problem; it applies only to the special class of knapsack problems derived from superincreasing sequences by multiplication by a constant modulo another constant. Thus, the basic knapsack problem is intact; only this restricted form has been solved. This result underscores the point that a cryptosystem based on a hard problem is not necessarily as hard to break as the underlying problem.