Research into new ways of performing cryptography continues. We have seen how researchers have relied on aspects of mathematics to generate hard problems and to devise algorithms.

Research into new ways of performing cryptography continues. We have seen how researchers have relied on aspects of mathematics to generate hard problems and to devise algorithms. In this section, we look at an alternative view of how cryptography may be done in the future. The approach we describe is not now on the market, nor is it likely to be so in the next few years. But it illustrates the need for creative thinking in inventing new encryption techniques. Although the science behind this approach is very difficult, the approach itself is really quite simple.

The novel approach, quantum cryptography, is in a way a variant of the idea behind a one-time pad. Remember from Chapter 2 that the one-time pad is the only provably unbreakable encryption scheme. The one- time pad requires two copies of a long string of unpredictable numbers, one copy each for the sender and receiver. The sender combines a number with a unit of plaintext to produce the ciphertext. If the numbers are truly unpredictable (that is, they have absolutely no discernible pattern), the attacker cannot separate the numbers from the ciphertext.

The difficulty with this approach is that there are few sources of sharable strings of random numbers. There are many natural phenomena that could yield a string of unpredictable numbers, but then we face the problem of communicating that string to the receiver in such a way that an interceptor cannot obtain them. Quantum cryptography addresses both problems, generating and communicating numbers. It was first explored by Wiesner [WIE83] in the 1980s; then the idea was developed by Bennett a decade later [BEN92a, BEN92b].

Quantum cryptography operates by sending a stream of photons from sender to receiver. The sender uses one of the polarizing filters to control which kind of photon is sent. The receiver uses either filter and records the orientation of the photon received. It does not matter if the receiver chooses the same filter the sender did; what matters is whether the receiver happened by chance to choose the same type as did the sender.

The most important property of quantum cryptography is that no one can eavesdrop on a communication without affecting the communication. With a little simple error detection coding, the sender and receiver can easily determine the presence of an eavesdropper. Heisenberg's uncertainty principle says that we cannot know both the speed and location of a particle at any given time; once we measure the speed, the location has already changed, and once we measure the location, the speed has already changed. Because of this principle, when we measure any property of a particle, it affects other properties. So, for example, measuring the orientation of a photon affects the

Let us see how this unusual approach can be used for cryptography.

Some of those results are correct and some are incorrect, depending on the filter Ruth chose. Now Ruth sends to Sam the kind of filter she used, as shown in Figure 12-20.

higher than expected, and so six of the ten photons transmitted were received correctly. Remembering that

means 1, Ruth can convert the photons to bits, as shown in the figure. In general, only half the photons transmitted will be received correctly, and so only half the bandwidth of this communication channel carries meaningful data. 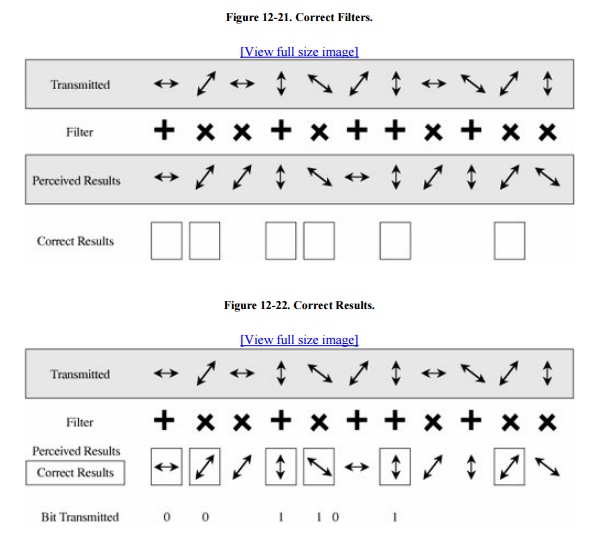 Notice that Ruth can tell Sam which filters she used and Sam can tell Ruth which of those will yield correct results without revealing anything about the actual bits transmitted. In this way, Sam and Ruth can talk about their transmission without an eavesdropper's knowing what they actually share.

The theory of quantum cryptography is solid, but some technical difficulties still must be worked out before the scheme can be put in practice. To implement quantum cryptography, we need a source of photons randomly but detectably oriented (for the sender) and a means of filtering the received photons reliably. A photon gun can fire photons on demand. Several different research teams are working to develop photon guns for cryptography, but so far none has succeeded. The best current technology involves pulsed lasers, but here, too, there is a problem. Occasionally the laser emits not one but two photons, which disturbs the pattern of reception and transmission. However, with error correcting codes on the stream of bits, it is relatively easy to detect and correct a few erroneous bits.

On the receiving side, too, there are problems. One device is subject to catastrophic failure in which it emits a current surge. Although this surge is easily detected, it requires the device to be reset, which takes time.

Experimental implementations of quantum cryptography are still in the laboratories. The U.K. Defence Evaluation and Research Agency in Malvern, England, demonstrated a successful communication through the atmosphere over a distance of 2 km, and the U.S. Los Alamos National Laboratory is testing a portable device that can operate over 45 km on a clear night. In 2006, the U.S. National Institute for Standards and Technology has demonstrated a quantum cryptographic system that operates over one kilometer over glass fiber at a rate of four megabits per second. In 2004, BBN Communications and Harvard University activated a joint network secured by quantum encryption. The network has six servers and covers a distance of ten kilometers. Reliable communications up to 20 kilometers have been achieved, and some scientists expect to be able to cover 50 kilometers reliably in the near future. (See [ELL04] for a discussion of the potential of quantum cryptography.)