The partition of Bengal (1905) led to the Swadeshi Movement and changed the course of the struggle for freedom.

The partition of Bengal (1905) led to the Swadeshi Movement and changed the course of the struggle for freedom. In various parts of India, especially Bengal, Punjab and Maharashtra popular leaders emerged. They implemented the programme of the Calcutta Congress which called upon the nation to promote Swadeshi enterprise, boycott foreign goods and promote national education.

(a) Response in Tamilnadu

V.O. Chidambaranar, V. Chakkaraiyar, Subramania Bharati and Surendranath Arya were some of the prominent leaders in Tamilnadu. Public meetings attended by thousands of people were organised in various parts of Tamilnadu. Tamil was used on the public platform for the first time to mobilise the people. Subaramania Bharati’s patriotic songs were especially important in stirring patriotic emotions. Many journals were started to propagate Swadeshi ideals. Swadesamitran and India were prominent journals. The extremist leader Bipin Chandra Pal toured Madras and delivered lectures which inspired the youth. Students and youth participated widely in the Swadeshi Movement. 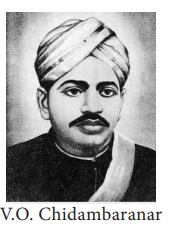 One of the most enterprising acts in pursuance of swadeshi was the launching of the Swadeshi Steam Navigation Company at Thoothukudi by V.O. Chidambaranar. He purchased two ships Gallia and Lavo and plied them between Thoothukudi and Colombo.

V.O.C joined with Subramania Siva in organising the mill workers in Thoothukudi and Tirunelveli. In 1908, he led a strike in the European-owned Coral Mills. It coincided with the release of Bipin Chandra Pal. V.O.C and Subramania Siva, who organised a public meeting to celebrate the release of Bipin, were arrested. The two leaders were charged with sedition and sentenced to rigorous imprisonment. Initially V.O.C. was given a draconian sentence of two life imprisonments. The news of the arrest sparked riots in Tirunelveli leading to the burning down of the police station, court building and municipal office. It led to the death of four people in police firing. V.O.C. was treated harshly in prison and was made to pull the heavy oil press. To avoid imprisonment Subramania Bharati moved to Pondicherry which was under French rule. Bharati’s example was followed by many other nationalists such as Aurobindo Ghosh and V. V. Subramanianar. 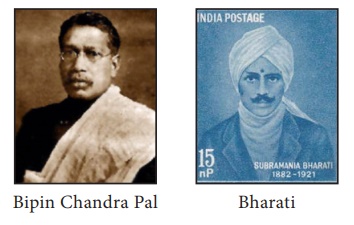 (b) Revolutionary Activities in Tamil Nadu

Pondicherry provided a safe haven for the revolutionaries. Many of these revolutionaries in Tamil Nadu were introduced and trained in revolutionary activities at India House in London and in Paris. M.P.T. Acharya, V.V. Subramanianar and T.S.S. Rajan were prominent among them. Revolutionary literature was distributed by them in Madras through Pondicherry. Radical papers such as India, Vijaya and Suryodayam came out of Pondicherry. 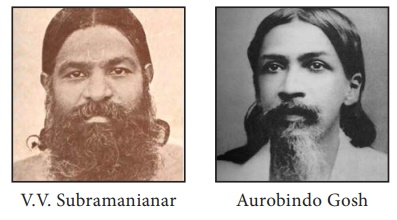 In 1904 Nilakanta Brahmachari and others started Bharata Matha Society, a secret society. The objective was to kill British officials and thereby kindle patriotic fervour among the people. Vanchinathan of Senkottai, was influenced by this organisation. On 17 June 1911 he shot dead Robert W.D’E. Ashe, Collector of Tirunelveli in Maniyachi Junction. After this he shot himself.

While the extremists and revolutionaries were suppressed with an iron hand, the moderates hoped for some constitutional reforms. However, they were disappointed with the Minto-Morley reforms as it did not provide for responsible government.

Thus when the national movement was in its ebb, Annie Besant, an Irish lady and leader of the Theosophical Society, proposed the Home Rule Movement on the model of Irish Home Rule League. She started Home Rule League in 1916 and carried forward the demand for home rule all over India. G.S. Arundale, B.P. Wadia and C.P. Ramaswamy assisted her in this campaign. They demanded home rule with only a nominal allegiance to British Crown. She started the newspapers New India and Commonweal to carry forward her agenda. She remarked, “Better bullock carts and freedom than a train deluxe with subjection”. Under the Press Act of 1910 Annie Besant was asked to pay hefty amount as security. She wrote two books, How India wrought for Freedom and India: A Nation and a pamphlet on self-government.