(a) Towards Poorna Swaraj

(b) Salt March to Vedaranyam

When the Viceroy did not accept the demands put forward by Gandhi, he launched the Civil Disobedience Movement. Rajaji organised and led a salt satyagraha march to Vedaranyam. The march started from Tiruchirappalli on 13 April 1930 and reached Vedaranyam in Thanjavur district on 28 April. A special song was composed for the march by Namakkal V. Ramalinganar with the lines, “A War is ahead sans sword, sans bloodshed… Join this march.” Despite a brutal crackdown by the police, the marching satyagrahis were provided a warm reception along the route. On reaching Vedaranyam 12 volunteers under the leadership of Rajaji broke the salt law by picking up salt. Rajaji was arrested. T.S.S. Rajan, Rukmani Lakshmipathi, Sardar Vedarathnam, C. Swaminathar and K. Santhanam were among the prominent leaders who participated in the Vedaranyam Salt Satyagraha. 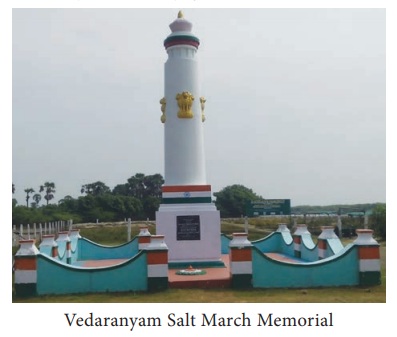 The satyagrahis under the leadership of T. Prakasam and K. Nageswara Rao set up a camp at Udayavanam near Madras. However, the police arrested them. It led to a hartal in Madras. 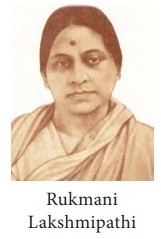 The clashes with the police in Tiruvallikeni which lasted for three hours on 27 April 1930 left three dead. Volunteers who attempted to offer salt Satyagraha in Rameswaram were arrested. Mill workers struck work across the province. Woman participated enthusiastically. Rukmani Lakshmipathi was the first woman to pay penalty for violation of salt laws. Police used brutal force to suppress the movement. Bhashyam, popularly known as Arya, hoisted the national flag atop Fort St. George on 26 January 1932. 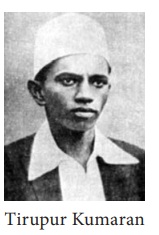 In the 1937 election the Congress emerged victorious. The Justice Party was trounced. Congress victory in the elections clearly indicated its popularity with the people. 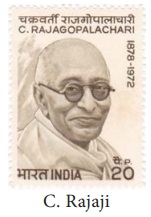 Rajaji formed the first Congress Ministry. He introduced prohibition on an experimental basis in Salem. To compensate for the loss of revenue he introduced a sales tax. When the British involved India in the Second World War without consulting the elected Congress ministries, the latter resigned.

One of the controversial measures of Rajaji was the introduction of Hindi as a compulsory subject in schools. This was considered to be a form of Aryan and North Indian imposition detrimental to Tamil language and culture, and therefore caused much public resentment. E.V.R. led a massive campaign against it. He organised an anti-Hindi Conference at Salem. It formulated a definite programme of action. The Scheduled Castes Federation and the Muslim League extended its support to the anti- Hindi agitation. Natarajan and Thalamuthu, two of the enthusiastic agitators died in prison. A rally was organised from Tiruchirappalli to Madras. More than 1200 protestors including E.V.R. were arrested. After the resignation of the Congress Ministry, the Governor of Madras who took over the reigns of administration removed Hindi as compulsory subject.