The Madras Native Association (MNA) was the earliest organisation to be founded in south India to articulate larger public rather than sectarian interests. It was started by Gazulu Lakshminarasu, Srinivasanar and their associates in 1852.

It consisted primarily of merchants. The objective was to promote the interests of its members and their focus was on reduction in taxation. It also protested against the support of the government to Christian missionary activities. It drew the attention of the government to the condition and needs of the people. One of the important contributions of the MNA was its agitation against torture of the peasants by revenue officials. These efforts led to the establishment of the Torture Commission and the eventual abolition of the Torture Act, which justified the collection of land revenue through torture. However, by 1862, the Madras Native Association had ceased to exist.

(b) Beginnings of the Nationalist Press: The Hindu and Swadesamitran

The appointment of T. Muthuswami as the first Indian Judge of the Madras High Court in 1877 created a furore in Madras Presidency. The entire press in Madras criticized the appointment of an Indian as a Judge. The press opposed his appointment and the educated youth realized that the press was entirely owned by Europeans. The need for a newspaper to express the Indian perspective was keenly felt. G. Subramaniam, M. Veeraraghavachari and four other friends together started a newspaper The Hindu in 1878. It soon became the vehicle of nationalist propaganda. G. Subramaniam also started a Tamil nationalist periodical Swadesamitran in 1891 which became a daily in 1899. The founding of The Hindu and Swadesamitran provided encouragement to the starting of other native newspapers such as Indian Patriot, South Indian Mail, Madras Standard, Desabhimani, Vijaya, Suryodayam and India. 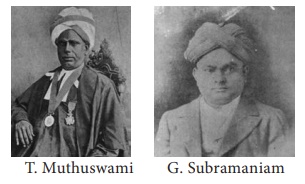 Madras Mahajana Sabha (MMS) was the earliest organisation in south India with clear nationalist objectives. On 16 May 1884 MMS was startedbyM.Veeraraghavachari,P.Anandacharlu, P. Rangaiah and few others. P. Rangaiah became its first president. P. Anandacharlu played an active role as its secretary. The members met periodically, debated public issues in closed meetings, conducted hall meetings and communicated their views to the government. Its demands included conduct of simultaneous civil services examinations in England and India, abolition of the Council of India in London, reduction of taxes and reduction of civil and military expenditure. Many of its demands were adopted later by the Indian National Congress founded in 1885.

Provincial associations such as the Madras Mahajana Sabha led to the formation of an all-India organisation, the Indian National Congress Leaders from different parts of India attended several meetings before the formation of the Congress. One such meeting was held in December 1884 in Theosophical Society at Adyar. It was attended by Dadabhai Naoroji, K.T. Telang, Surendranath Banerjee and other prominent leaders apart from G. Subramaniam, Rangaiah and Anandacharlu from Madras. 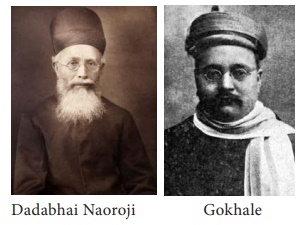 The first session of the Indian National Congress was held in 1885 at Bombay. Out of a total of 72 delegates 22 members were from Madras.

The second session of the Indian National Congress was held in Calcutta in 1886, with Dadabhai Naoroji in the Chair. The third session was held at Makkis Garden, now known as the Thousand lights, in Madras in 1887 with Badruddin Tyabji as president. Out of the 607 all India delegates of 362 were from Madras Presidency.

Prominent Nationalists of Tamil Nadu in the Moderate phase

The early nationalists believed in constitutional methods. Their activities consisted of conducting hall meetings and deliberating the problems of the country in English. When, at the time of Partition of Bengal, Tilak and other leaders adopted popular methods such as mass public meetings, and used vernacular languages to address the larger public, the early nationalists came to be known as moderates. The distinguished Tamil Moderates from Madras: V.S. Srinivasa Sastri, P.S. Sivasamy, V. Krishnasamy, T.R. Venkatramanar, G.A. Natesan, T.M. Madhava Rao, and S. Subramaniar.

Tamil Nadu was then part of the Madras Presidency which included large parts of the present-day states of Andhra Pradesh (Coastal districts and Rayalaseema), Karnataka (Bengaluru, Bellary, South Canara), Kerala (Malabar) and even Odisha (Ganjam).