The pentose L-arabinose occurs naturally in the walls of plant cells. The bacterium E. coli, but not humans, can use this sugar as a source of carbon and energy.

The pentose L-arabinose occurs naturally in the walls of plant cells. The bacterium E. coli, but not humans, can use this sugar as a source of carbon and energy. Therefore arabinose is a free meal to intestinal flora when we eat a meal containing vegetables. Before arabinose can be metabolized by the bacterial intracellular arabinose enzymes, it must be transported from the growth medium through the inner membrane to the cytoplasm. This is performed by two independent arabinose transport systems, the products of the araE and araFGH genes. The araE system possesses a low affinity for arabinose and therefore is most effective in the presence of high concentrations of arabinose. The araFGH system possesses high affinity for arabinose uptake and there-fore may be most valuable when arabinose concentrations are very low, on the order of 10-7 M.

Arabinose, like many sugars, exists in solution predominantly in a ring form in either of two conformations. These interconvert with a half-time of about 10 minutes (Fig. 12.1). Therefore it is possible that one of the transport systems is specific for the α anomeric form of arabinose and the other transports the β form. The β form is a substrate for the first enzyme of the catabolic pathway, but it is not known whether the other ring form or the linear form, which exists in only trace concentrations, might be the true inducer and play a role analogous to that of the true inducer, allolactose, of the lac operon. 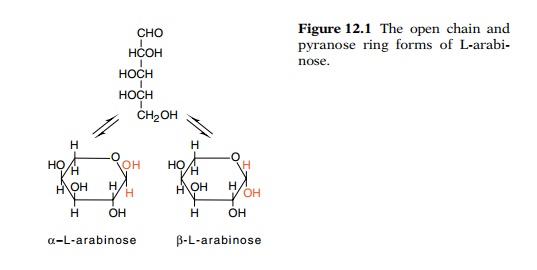 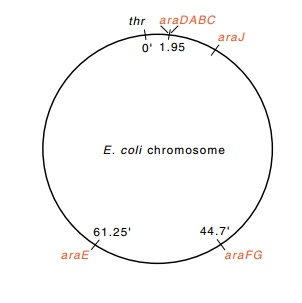 Figure 12.2 The locations on theE. coli chromosome of the genesinduced by L-arabinose. Genes araE and araFGH are for uptake, araBAD, for catabolism, and araJ isof unknown function. The numbers indicate the gene positions on the genetic map.

The duplication of arabinose uptake systems hindered their genetic and physiological study because mutants are then difficult to identify. A defect in either system is masked by the activity of the other system. The genes coding for the enzymes required for arabinose catabolism, however, have been easier to map and study. They are located near the top of the genetic map as it is usually drawn (Fig. 12.2). Arabinose is first converted to L-ribulose by arabinose isomerase, the araA gene product. Then ribulose is phosphorylated by ribulokinase, the product of the araB gene, to yield L-ribulose-5-phosphate (Fig. 12.3). The ribu-lose phosphate is next converted to D-xylulose-5-phosphate by the araD gene product, ribulose phosphate epimerase. Xylulose phosphate enters the pentose phosphate shunt, and the enzymes subsequently involved are not induced specifically by the presence of arabinose.

The genes of the two arabinose active transport systems plus an additional arabinose-inducible gene of unknown function map to three different regions of the chromosome. These are different from the map locations of the genes required for the catabolism of arabinose. There-

Figure 12.3 The path of catabolism of L-arabinose and the gene productscatalyzing the conversion.

fore a total of four sets of genes have been discovered whose activities are regulated by arabinose. Why should this be? Why not have all the genes in one large operon? Two possible reasons will be discussed below.

At low arabinose concentrations, a high-affinity, but perhaps energy-inefficient or low-capacity, uptake system might be necessary for the cells to be able to utilize any arabinose at all. On the other hand, in the presence of high concentrations of arabinose, a different uptake system might be more useful. One with a high transport rate would be neces-sary. This need not have a particularly high affinity for arabinose. These different needs would necessitate splitting the corresponding genes into separate operons so that they could be differentially regulated. Alterna-tively, suppose arabinose were suddenly presented to bacteria, as it might be in the gut. It is to the cell’s great advantage to begin metabo-lizing this new nutrient just as soon as possible. If, however, all the genes for the uptake and metabolism of arabinose were in a single long operon, then the interval from induction until RNA polymerase could transcribe to the end of the operon would be about three minutes. Any strain that divided its arabinose operon into two or three separately transcribed units could induce all its ara enzymes more quickly and begin apprecia-ble arabinose metabolism a minute or two sooner than cells with an undivided arabinose operon. This time saved each time the operon was induced could be of enormous selective value over evolutionary time scales.

Induction of the arabinose operon also requires the presence of cyclic AMP and the cyclic AMP receptor protein CRP. The main role of this protein is to enable induction of the arabinose operon only in the absence of glucose. This prevents the cell’s attempting to utilize arabi - nose when glucose, which is a better carbon source, is present. The general phenomenon of being able to induce an operon well only in the absence of glucose is called catabolite repression. A significant number of bacterial operons display catabolite repression.