Now that the regulatory phenomena of the ara operon have been laid out, what can be said about its mechanism of regulation?

Now that the regulatory phenomena of the ara operon have been laid out, what can be said about its mechanism of regulation? The nucleotide sequences of the promoters pBAD, pE, pFGH, show three distinct regions of homology among themselves. One of these is the RNA polymerase-binding site. Another is the cyclic AMP receptor protein-binding site, and the third is the AraC protein-binding site. Inexplicably, the araBAD

Figure 12.10 Schematic of the binding sites of AraC protein, CRP, and RNApolymerase on the araBAD regulatory region. The araO1 site is the operator for pCand the araI site is required for induction.

A second AraC protein-binding site called araO1 lies another 60 nucleotides upstream of araI. This site overlaps the RNA polymerase-binding site of pC, and since occupancy of araO1 by AraC protein sterically interferes with the binding of RNA polymerase at pC, araO1 is an operator of pC. AraO1 is not directly involved with repression of pBAD. A simple demonstration of this is the behavior of pC and pBAD as the level of AraC protein is increased in a series of strains containing plasmids with araC fused to promoters of different strengths. As the level of AraC protein is increased, pC shuts down but pBAD remains fully inducible (Table 12.4). 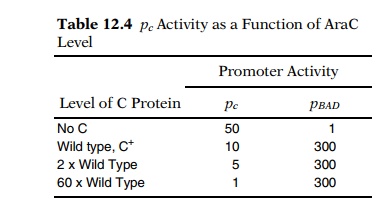 Deletion analysis showed that one of the sites required for repression of pBAD lies beyond araO1. It is called araO2, and it lies 270 base pairs upstream from the pBAD transcription start point. Footprinting has confirmed that AraC protein binds to this site, and mutation analysis

has shown that a single nucleotide change in this region can eliminate repression of pBAD. Deletion of this site is the reason that the original deletion that was isolated by Englesberg could no longer repress pBAD but could induce. His deletion extended through araO2 into araO1, and during the interval of several years between the discovery of O1 and the discovery of O2, araO1 was thought to be required for repression of pBAD.

The location of the CRP site required for stimulation of the pBAD promoter is most surprising. In the lac operon, the CRP site lies at positions -48 to -78 with respect to the start of transcription, just next to RNA polymerase. At the ara promoter, AraC protein occupies this site and CRP lies further away, binding to positions -80 to -110. CRP makes specific contacts with RNA polymerase in activating transcription of the lac promoter. Does it make a different set of specific contacts with AraCprotein, and does AraC protein make yet another set of contacts with RNA polymerase? Alternatively, both proteins might simultaneously contact RNA polymerase to activate transcription, but it seems more likely that CRP activates through a DNA bending mechanism and that AraC activates through direct protein-protein contacts.