DNA Looping and Repression of araBAD

How can repression of pBAD be generated from the araO2 site that is located more than 200 base pairs upstream?

DNA Looping and Repression of araBAD

How can repression of pBAD be generated from the araO2 site that is located more than 200 base pairs upstream? There are three possibilities (Fig. 12.11). A signal could be transmitted through the DNA, for exam-ple, by changing the angle of the base tilt; something could polymerize along the DNA starting at araO2 and finally cover araI; or the DNA could bend back and bring the araO2 region near pBAD. This latter possibility was shown to be the case by a series of experiments in which the spacing between araO2 and the promoter region was varied. If five base pairs, which is half a helical turn, are added between these two sites, the ability to repress is greatly diminished, but if 11 base pairs are added, the ability to repress is restored. An addition of 15 base pairs eliminates repression, and a longer addition of 31 base pairs restores repression. 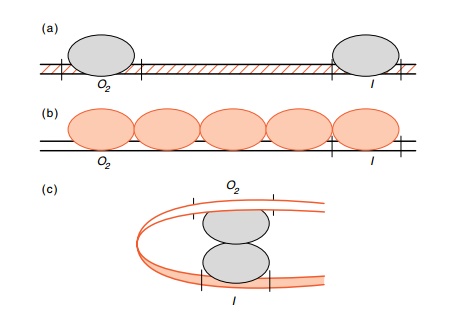 Figure 12.11 Three possible mechanisms for repression from a site severalhundred nucleotides from a promoter (a) properties of the DNA can be altered, (b) protein can polymerize along the DNA, or (c) loops can form.

These results show that the absolute distance between the two sites is not greatly important but that the angular orientation between the two is. This implies that the DNA loops back to form contacts between AraC protein bound at araO2 and something in the promoter region. If the protein at araO2 is on the opposite side of the DNA (Fig. 12.12), the additional energy required to twist the DNA half a turn so the sites again face one another is too great and the loop required for repression does not form. The isolation of repression deficient point mutations located the sites necessary for repression. As expected, some were in araO2. Additional repression negative mutations were in araI, thereby identi-fying the other end of the loop.

Figure 12.12 How a five-base-pair insertion can introduce half a helical turnand prevent formation of a loop.