The araC gene is oriented oppositely to the araBAD genes, and its promoter, pC, is adjacent to the regulatory sites for the BAD operon.

The araC gene is oriented oppositely to the araBAD genes, and its promoter, pC, is adjacent to the regulatory sites for the BAD operon. This location raises the possibility that the activity of pC might be regulated by the same proteins that regulate the activity of pBAD.

Since the measurement of AraC protein is difficult, lengthy, and imprecise, Casadaban chose not to study regulation of the pC promoter by measuring AraC protein itself but instead to fuse the promoter to the

β-galactosidase gene(Fig. 12.8). The assay of this protein is simple. Thegeneral strategy of fusing β-galactosidase to promoters has become a widespread tool. It is used not only in the study of bacterial genes, but also in higher cells. Its use in Drosophila, for example, permits facile study of the spatial and temporal specificity of gene regulation. Also, the Berk-Sharp S1 nuclease mapping method which was discussed now permits a straightforward characterization of the pC promoter activity under a variety of conditions. The original pC-lacZ fusion was constructed in a series of intricate genetic operations. First the β-galactosidase gene was brought near the araC gene and then intervening DNA was deleted so that the structural gene of β-galactosi-dase was fused to pC. Hence the measurement of β-galactosidase became a measurement of the activity of pC.

The first finding was that pC is stimulated about threefold by the presence of cyclic AMP-CRP. A more surprising finding was that pC is about six times more active in the absence of AraC protein than in its presence. That is, AraC protein represses its own synthesis. A third finding was that on the addition of arabinose to cells, the level of araC messenger increases about fourfold in several minutes and then slowly falls back to its prior level (Fig. 12.9). Whether this transient derepres-sion is of any physiological value is unknown. One might expect that the resulting elevated level of AraC protein could facilitate induction of the ara operons not already saturated with the protein. 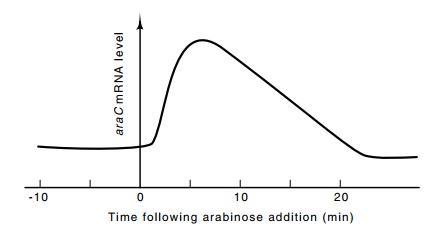