Genetics of the Arabinose System

Most mutations in the arabinose operon generate the expected pheno - types.

Genetics of the Arabinose System

Most mutations in the arabinose operon generate the expected pheno - types. The araB, araA, and araD genes lie in one transcriptional unit served by promoter pBAD (Fig. 12.4), and mutations in these genes abolish the activity of the enzyme in question as well as leave the cells arabinose-negative. Mutations in araD, however, have the useful prop-erty that they make the cells sensitive to the presence of arabinose due to their resulting accumulation of ribulose phosphate. This type of sensitivity is not an isolated case, for high levels of many sugar phos-phates in many types of cells are toxic or growth inhibitory.

The arabinose-sensitivity of AraD- cells provides a simple way to isolate mutations in the arabinose genes. AraD- mutants that have further mutated to become resistant to arabinose contain mutations preventing the accumulation of ribulose phosphate. Each cell capable of growing into a colony must contain a secondary mutation in the 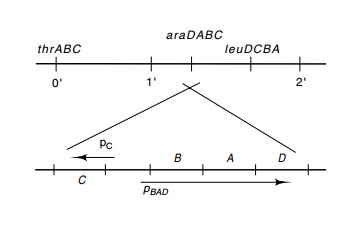 Figure 12.4 Fine structure of theE. coli genome in the region of the araBAD genes, the ara promoters,and the directions of transcription of the genes. In the top, the genes are drawn in the conventional ori-entation of the E. coli genetic map, and in the bottom, the arabinose genes have been inverted to con-form with the conventional usage, in which the major transcription is rightward.

arabinose operon in addition to the AraD- mutation. Such mutants are isolated by spreading large numbers of AraD- cells onto plates contain-ing arabinose and some other source of carbon and energy, such as glycerol or yeast extract. The few cells that grow into colonies contain additional mutations in araC, B, or A. This scheme does not yield transport-negative mutants since both transport systems would have to be inactivated before the cells would be arabinose-resistant, and such double mutants are too rare to be detected.

The behavior of mutations in one of the arabinose genes was para-doxical. The cells became arabinose-negative, but no enzymatic activity could be associated with the gene. In fact, none seemed necessary because the other arabinose gene products performed all the required metabolic conversions. Additionally, cells with mutations in this gene, araC, had the strange property of not possessing any of the arabinose-induced enzymes or active transport systems (Table 12.1). If the gene product were not any of the logical proteins, perhaps it wasn’t a protein. This wasn’t possible, however, because nonsense mutations existed in the araC gene. Only genes encoding proteins can possess nonsense mutations. Therefore, the araC gene product had to be a protein.

Formally, the behavior of the araC mutants was consistent with several regulatory mechanisms. First, contrary to expectations preva-lent at the time of this work, araC could code for a positive regulator, 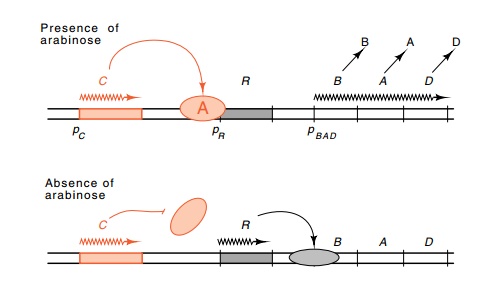 one whose presence is necessary for synthesis of the other ara gene products. Second, araC could code for a component directly involved with the uptake of arabinose into cells. Its absence would mean that the intracellular level of arabinose would never become high enough to permit derepression of the arabinose genes. Third, araC could be part of a double-negative regulation system (Fig. 12.5). That is, AraC protein in the presence of arabinose could repress the synthesis of the true repressor of the arabinose operon. In this case, if araC were inactive or arabinose were absent, then the repressor would be synthesized and the arabinose enzymes would not be synthesized.