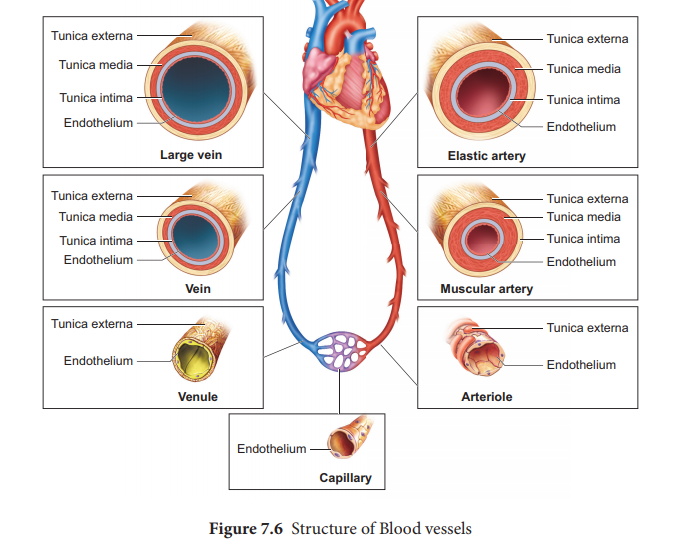 The vessels carrying the blood are of three types; they are the arteries, veins and capillaries.

The vessels carrying the blood are of three types; they are the arteries, veins and capillaries. These vessels are hollow structures and have complex walls surrounding the lumen. The blood vessels in humans are composed of three layers, tunica intima, tunica media and tunica externa. The inner layer, tunica intima or tunica interna supports the vascular endothelium, the middle layer, tunica media is composed of smooth muscles and an extra cellular matrix which contains a protein, elastin. The contraction and relaxation of the smooth muscles results in vasoconstriction and vasodilation. The outer layer, tunica externa or tunica adventitia is composed of collagen fibres. The structure of blood vessels is illustrated in Figure 7.6.

The blood vessels that carry blood away from the heart are called arteries. The arteries usually lie deep inside the body. The walls of the arteries are thick, non collapsible to withstand high pressure. Valves are absent and have a narrow lumen. All arteries carry oxygenated blood, except the pulmonary artery. The largest artery, the aorta (2.5 cm in diameter and 2 mm thick) branch into smaller arteries and culminates into the tissues as feed arteries. In the tissues the arteries branches into arterioles.

As blood enters an arteriole it may have a pressure of 85 mm Hg (11.3 KPa) but as it leaves and flows into the capillary, the pressure drops to 35 mm Hg (4.7 KPa). (Note 1 mm  Hg =0.13 KPa. SI unit of Hg is KiloPascal (KPa)). Arterioles are small, narrow, and thin walled which are connected to the capillaries. A small sphincter lies at the junction between the arterioles and capillaries to regulate the blood supply. Arteries do not always branch into arterioles, they can also form anastomoses.

Capillary beds are made up of fine networks of capillaries. The capillaries are thin walled and consist of single layer of squamous epithelium. 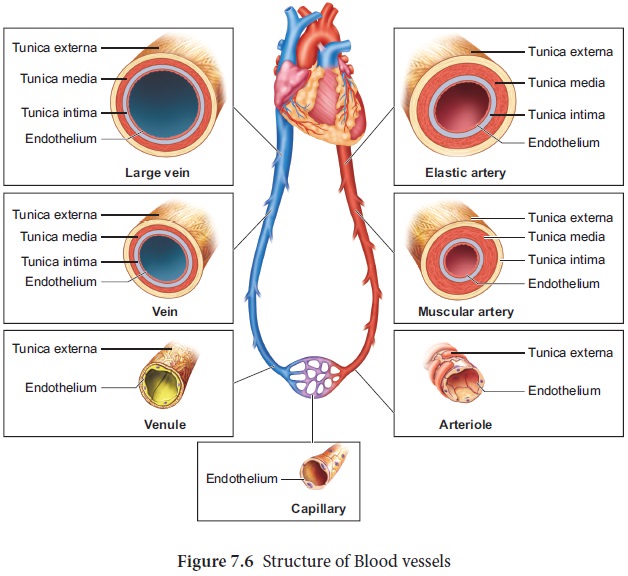 Veins have thinner walls and a larger lumen and hence can be easily stretched. They carry deoxygenated blood except, the pulmonary vein. The blood pressure is low and the lumen has a wide wall which is collapsible. Tunica media is thinner in veins than in arteries. Unidirectional flow of blood in veins is due to the presence of semilunar valves that prevents backflow of blood. Blood samples are usually taken from the veins rather than artery because of low pressure in the veins.

Blood vessels that supply blood to the cardiac muscles with all nutrients and removes wastes are the coronary arteries and veins. Heart muscle is supplied by two arteries namely right and left coronary arteries. These arteries are the first branch of the aorta. Arteries usually surround the heart in the manner of a crown, hence called coronary artery (L. Corona - crown).